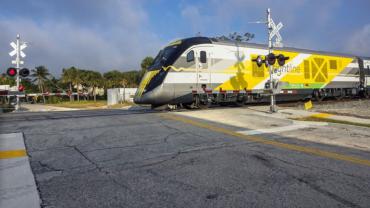 The chairman of a congressional committee important to the funding of All Aboard Florida's proposed Miami-Orlando passenger rail service has asked U.S. Transportation Secretary Elaine Chao to suspend the allocation of AAF Private Activity Bonds (PABs) until his subcommittee gets answers to its questions.

In a May 16 letter to Chao made public Tuesday, Mark Meadows, R-N.C., chairman of the House Oversight and Government Reform Subcommittee on Government Operations, said he approached his subcommittee's April 19 hearing "with an open mind, but came away from it deeply troubled about (USDOT's) position." Have a look at the hearing by clicking here.

But now Meadows questions USDOT's theory that "one dollar in Title 23 funds spent on highway-rail crossings allows a passenger railroad to be eligible for $1.15 billion in PABs." Meadows called it "deeply concerning."

More important, said Meadows, was the "decision to approve AAF's most recent $1.15 billion allocation (which was) not spent on the AAF project itself. Instead, (it was) spent on the highway-rail crossings on the rail corridor on which AAF would run -- a corridor owned by an entirely different company that has granted AAF an easement to run its trains. This creates substantial problems ..."

Meadows calls AAF's credibility into question, for making claims in its PAB application that AAF had been the recipient of the Title 23 money. "This ... not only circumvents the intent of Congress when it added the 'qualified highway or surface freight transfer facilities' category to the list of projects eligible for PABs in 2005," writes Meadows, "but also jeopardizes the credibility of the entire PAB program."

The bottom line, claims Meadows in his letter, is that the hearing yielded more questions than answers -- questions that were raised April 19. He asked Chao for the information asked for by June 1. Otherwise, "... we cannot support what amounts to blank-check authority for this program."

Besides Meadows, signatories on the May 16 letter were Congressmen Bill Posey, Brian Mast, Ron DeSantis and Matt Gaetz.

Sunshine State News on Tuesday was unable to reach Brightline President and Chief Operating Officer Patrick Goddard, who was a primary speaker during the April hearing in Washington, to comment on Meadows' letter.

Ali Soule, Brightline's public affairs and media relations director, provided two letters the company believes get to the heart of Meadows' still-unanswered questions: one from Myles Tobin, general counsel for All Aboard Florida; and another from John Mica, who says he was involved in the drafting and adoption of language in the 2005 transportation authorization bill at issue.  Tobin's letter is too long to place in an attachment on this page.

"... Let me say it was our clear intent to establish eligibility for transportation projects which have a public benefit by providing this incentive to the private sector in order to assist in the funding of these projects," Mica writes.  His letter is available in the blue "Download" attachment below.

Martin and Indian River counties filed a federal lawsuit in February in an effort to block the bond sale, arguing that the Brightline does not qualify for the bonds. The suit also alleges federal officials either ignored or failed to consider the impacts the company’s trains could have on the environment, public safety and maritime traffic.

The April 19 review of PABs was made at the request of Florida GOP Congressman Brian Mast in a Feb. 15 letter to Chairman Meadows. Mast, who has been entirely supportive of his beleaguered coastal constituency affected by the railroad's plans, said in his letter, “Brightline is continuing their deceptive business practices, seeking public financing for this expansion by claiming that their passenger rail train is actually a 'highway' because they fail to qualify for public financing under the statutory definition of high-speed rail.”

Besides PABs, the April 19 hearing also focused on the financial burden AAF is imposing on counties that will have to pay for the costs of maintaining the necessary safety improvements in perpetuity. Martin County has 27 at-grade crossings, Indian River County has 31.

In his testimony, Indian River County Attorney Dylan Reingold stated that, “An initial calculation performed by Indian River County estimates that these long-term maintenance costs will be $8.2 million through 2030 for our community alone -- a significant sum for our small county.”

I believe the purpose of this

Permalink Submitted by Rosemary Levin on May 29, 2018 - 11:24am
I believe the purpose of this rail line is obvious. It's to allow tourists from cruise ships to get to the Orlando theme parks easily, and visa-versa. There's little benefit for most Florida residents, save a few who live near the few stops it makes. It does move quickly through the crossings, so it's impact on road traffic is not too great. The biggest problem comes with it's impact on maritime traffic. The railroad bridges are slow and must open quite a while before the train arrives. In Ft. Lauderdale, they built the station very close to the bridge that crosses the New River. There isn't enough room to construct a higher bridge, which would be necessary to eliminate the blocking of marine traffic on that busy river. The value of the large marine facilities that currently exist west of the bridge, as well as all the homes on the many canals that exist there, will be seeing a precipitous drop in their value. All this to fund tourists from out of state.

If the tracks used were CSX

Permalink Submitted by Rob Rozzi on May 27, 2018 - 10:22am
If the tracks used were CSX which travel west of the major populated Treasure Coast and Indian River areas and then on to Orlando it would solve the problem? It could be a win win for all except for the tax burden of Florida residents. This entire area had no stops planned by Brightline so no revenue is affected.

Hmm. Why was I under the

Permalink Submitted by Lynn Siebert on May 25, 2018 - 7:56am
Hmm. Why was I under the impression that this Brightline project was privately funded? I don't remember reading anything in the news re: taxpayer money being used for this project. I was sure this would be another boondoggle like AmTrak and the fast train project in California. However, if no tax payer money was involved, why not go for it, right? What a joke...on us, the taxpayers. Finally, we have a few leaders in Congress who are demanding accountability before rubber stamping partial or full funding of State Projects. We must send more such leaders to Congress this coming November.

The end result of train

Permalink Submitted by RICHARD RIKER on May 23, 2018 - 3:18pm
The end result of train travel is everyone pays for it whether or not they wish to or can use it. It's very socialistic. Haven't people already learned what a waste of money it is, just look at Sun Rail.

Permalink Submitted by C Breeze on May 22, 2018 - 4:56pm
FINALLY !.... Someone with common sense (Congressman Mark Meadows R-NC) comes along, questioning this "All Aboard Florida" bottomless, black hole, MONEY PIT...! SAVE US FROM THIS "POLITICAL PORK" DEBACLE...! ("Passenger" trains can ONLY function in the "debt base" that they all exist in..! Can you spell A-M-T-R-A-K ? (the BIGGEST "train debacle" ever foisted upon taxpaying Citizens)... and the DEBT is "endless" for just as long as these "trains" roll...

It is strange to see

Permalink Submitted by Julian Rogers on May 22, 2018 - 8:53pm
It is strange to see Republicans attack a private property and capitalistic solution to a transportation problem and demand that only a asphalt- based, government solution is allowed.