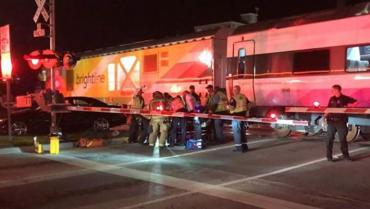 Finally Treasure Coast citizens and their representatives who have been fighting a high-speed rail line they say will diminish the region's quality of life, will get their chance to testify at a hearing in the nation's capital.

Dylan Reingold, Indian River County attorney; Dan Wouters, division chief, Martin County Fire Rescue; and Bob Crandall, CARE FL Steering Committee member will appear at 10 a.m. Thursday before the House Oversight and Government Reform Subcommittee on Government Operations. They will be speaking their minds on the U.S. Department of Transportation’s decision to issue PABs to finance the All Aboard Florida (AAF) rail project.

The review of the PABs was made at the request of Florida GOP Congressman Brian Mast in a letter to Chairman Meadows. Mast, who has been entirely supportive of his beleaguered coastal constituency affected by the railroad's plans, said in his letter, “Brightline is continuing their deceptive business practices, seeking public financing for this expansion by claiming that their passenger rail train is actually a 'highway' because they fail to qualify for public financing under the statutory definition of high-speed rail.”

Brightline currently runs in Florida from Fort Lauderdale to West Palm Beach, and during its short life has been involved in six accidents in which people died. The company is planning to expand from Miami to Orlando, making no stops on the Treasure Coast, but increasing trains on the route, including more freight trains.

At Mast’s request, the United States Coast Guard conducted a survey, completed Feb. 28, to collect information about waterway use near the St. Lucie and Loxahatchee River railroad bridges. The survey is analyzing the potential impact that expanded rail traffic, including as a result of Brightline, would have on Treasure Coast boat traffic and could impact the extent to which Brightline is permitted to expand on the Treasure Coast.

To stream the committee hearing live, click here. Note that the video will not appear until the hearing begins.

AAF & Brightline is a junk

Permalink Submitted by Alan Schlossberg on May 29, 2018 - 12:55pm
AAF & Brightline is a junk bond operation that is a very risky project The previous 70 billion owner & hedge fund, Fortress investment refused to fund their LLC because they knew what a poor risk it was The financial community including Bank America ,Etc did an assessment of the credit worthiness of Brightline & determined that this was a very risky project,as documented in their scathing report This company never before ran a railroad & the concern is that bondholders would loose their money & Brightline would look to be bailed out by the State or the Feds,as none of these rail projects are ever profitable What is needed & supported by the public is a real passenger service like Trirail running along the FEC tracks & serving towns from Miami to Jupitor which also would eliminate the need for Brightline

Permalink Submitted by jadebenn on June 12, 2018 - 9:10pm
Fortress still owns Brightline. They're not a "previous owner."

The snobs opposed should

Permalink Submitted by Progressive Pas... on April 19, 2018 - 8:10am
The snobs opposed should choke on the cake they would insist we eat first. CHOOOO CHOOOO if you can't take the heat, get out of the peninsula! Take a car, private airplane, yacht or horse, don't care how! The train of progress is pulling into South Florida!

Don't believe for a minute

Permalink Submitted by Carla Gianetti on April 18, 2018 - 8:55pm
Don't believe for a minute that the taxpayers won't have to pay for this boondoggle! Look at the cost increases to the California hi speed rail system. And why disturb the quality of life of those living near the rail line. The increased number of rumbling trains & high decibel horns are disruptive to the sleep of all those near the tracks, not to mention the patients in nearby hospitals. I am urging those in Congress to not support Brightline & their lobbyists. We will take note of those that vote for it.

Apparently, the cost of clout

Permalink Submitted by Rail Provocateur on April 18, 2018 - 5:33pm
Apparently, the cost of clout has no limits, even when the intent is to so overtly impair mobility and economic development for those who do not reside behind the iron gates and cul de sacs of the Treasure Coast. This issue has no pertinent reason to be before Congress other than for the lobbyists fronting for CARE FL to bring their campaign donations. Brightline is a very well conceived intercity rail project that will explicitly serve the needs of the state as all weather transport for commuters, travel and leisure, and business; without requiring more interstate lanes to be built. Who could possibly be against such an idea as it even is now taking hold in California, but for those intra-state airlines, bus firms, auto rental firms, oil and tire companies, etc? Makes one regret that we did not go into the lobbyist business...

Let me contest the phrase

Permalink Submitted by Ill Conceved on May 18, 2018 - 9:40am
Let me contest the phrase "very well conceived intercity rail project" for the following reasons 1) It does not serve the communities between Palm Beach and Orlando while creating a nuisance. 2) Putting high speed trains on existing antique infrastructure creates a deadly hazard. 3) Restricting access to hospitals, and slowing response times for first responders. 4) Restricting access to recreational and commercial vessels using the Okeechobee waterway. 5) Putting high speed trains on the same tracks as freight trains carrying compressed natural gas is a recipe for a major exposion. 6) No passenger railroad in the US is profitable. Cost of clout, you have to be paid by Brightline for such statements.

Will Brightline impose the

Permalink Submitted by Barry Rashkin on April 18, 2018 - 3:37pm
Will Brightline impose the quiet zones at all Treasure Coast grade crossing and will it include the FEC freight trains? Will they be installing the additional safety precautions at all grade crossings? Thank You for your continued fight to prevent this train service

The answer is build more

Permalink Submitted by Julian Rogers on April 18, 2018 - 12:55pm
The answer is build more roads, tolerate more traffic, learn to accept gridlock and air pollution. Good Americans drive everywhere in their own car with the taxpayer footing the entire bill for the cost of the road system. It worked for California; we can do the same thing here. We deserve it. "Democracy is based on the premise that the general public knows what they want and they deserve to get it good and hard". H. Mehnken

There are not commuter rail

Permalink Submitted by RepublicanConscience on April 18, 2018 - 7:01am
There are not any commuter rail lines that can operate without public funded subsidies. They are not profitable. I am for all the rail systems as long as taxpayers don't subsidize them. It should be a user pay and if it can't be profitable let it go out of business. The U. S. Post Office seems to have turned itself around in the face of extinction, by teaming up with profitable partners like FedEx and UPS. Profit motive is the key to success.