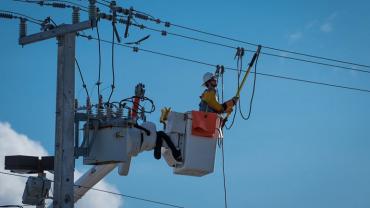 Florida Power & Light is the latest company to reap the benefits of President Donald Trump’s signature tax reform package, giving consumers more jingle in their pocket as the power company uses extra funding to recoup the cost of restoring power after Hurricane Irma.

On Tuesday, Florida Power & Light announced it would be using the money from the new federal tax overhaul to avoid billing its customers for the $1.3 billion cost of restoring power after the storm swept through the state in September.

In October, FPL said it planned on charging its 4.9 million customers to pay the $1 billion price tag from Hurricane Irma damage. Billing was expected to begin in March, but ultimately will not come to fruition after Congress and President Trump approved the $1.5 trillion tax overhaul late last year.

FPL may be able to use future federal tax savings to continue operating under the current base rate agreement beyond the initial term, which covers through 2020, for up to two additional years.

According to FPL, each FPL customer will save an average of $250.

FPL said the timing of the tax reform on the heels of the most expensive hurricane in Florida history created an “unusual and unprecedented opportunity.”

“We believe the plan we’ve outlined is the fastest way to begin passing tax savings along to our customers and the most appropriate approach to keeping rates low and stable for years to come,” said FPL chief executive officer Eric Silagy.

FPL isn’t the only organization to see the benefits of the new tax policy. Companies like Walmart and Comcast have already announced pay raises and bonuses as a result of the tax reform

Walmart employees will also be eligible for a $1,000 bonus based on their tenure with the company.

“Thanks to federal tax savings, your rates won’t go up to pay for Hurricane Irma restoration,” FPL wrote on Twitter. “We hope to use these tax savings to keep your rates low and stable for years to come.”