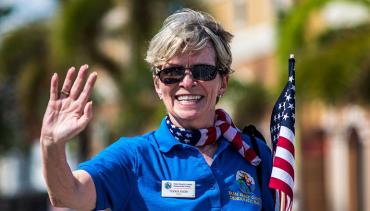 Rizzo took nearly three-quarters of the vote, with 890 votes to her opponent Stacey Patel’s 291 votes.

Three women initially vied for the top position in the FDP, which was vacated last month when former chairman Stephen Bittel resigned amidst allegations he had made inappropriate comments and gazes to female staffers and consultants, creating an “unprofessional” and “creepy” work environment for women.

Rizzo was widely expected to win and led the pack among the possible contenders against Hillsborough County Democratic activist Alma Gonzalez and Brevard Democratic executive committee chair Stacey Patel, but the race eventually turned into a two-person battle after Gonzalez dropped out and announced she would instead support Rizzo for chair.

Service Employees International Union (SEIU) Florida President Monica Russo was also pondering a bid for the job, but Russo technically wasn’t eligible since she isn’t a party chair or a state committeewoman. Russo ultimately threw her weight behind Patel after backing out of the race this week.

FDP spokeswoman Johanna Cervone said Rizzo’s election would help continue the momentum the party, disgruntled over the 2016 election, has been building since President Donald Trump took office earlier this year.

"Democrats around the country are resisting Donald Trump and the Republican party’s disastrous policies that only serve the wealthy few while leaving working families behind,” she said. “Florida Democrats are organized, energized and taking on Donald Trump, Rick Scott and the GOP.”

Rizzo, who has served as head of the Palm Beach Democratic Party since 2012, nabbed the endorsements of several elected officials this week, some of whom carried significant weight in the chair voting process.

U.S. Sen. Bill Nelson announced he’d back Rizzo’s nomination on Friday and would throw his 42 votes her way.

“I’m honored to receive the endorsement from such a diverse group of electors,” Rizzo said at the time.

Statewide Democratic candidates expressed the hope that Rizzo would be a strong leader for a party which has largely fallen behind and been severely outnumbered by Republicans in Tallahassee for the last 20 years.

“Florida Democrats have a big task ahead of us in 2018: re-electing Senator Nelson, putting Democrats in the Governor’s Mansion and the Cabinet, and fighting for seats up and down the ballot,” said Tallahassee Mayor and Democratic gubernatorial candidate Andrew Gillum. “I know that Chairwoman Rizzo will bring the energy and excitement we need, and I’m excited to work with her.”

“Under her steady leadership, I believe our party is in a stronger position this cycle to continue to build on our incredible successes this year and help sustain outreach and organizing efforts in 2018 and in the years to come,” said Miami Beach Mayor and Democratic gubernatorial candidate Philip Levine.

Cervone also said to expect a surge of “blue” in a purple state next year with Rizzo at the helm.

“Under Chairwoman Rizzo's new leadership, FDP is ready to flip Florida blue in 2018 and begin creating an economy that works for everyone, not just those at the top,” she said.

Now that the court has undone

Permalink Submitted by Diane on December 11, 2017 - 1:02pm
Now that the court has undone the Republican's illegal gerrymandering, Democrats are winning again!!!

Permalink Submitted by army op's vet on December 9, 2017 - 8:16pm
Ha....you going top have Better Chair of demo's IF you think you going to Take Back FL...or DC....you can thank Crime Wave Jerry Demings as Sheriff in Orlando for that ...Maybe Corrine Brown will Donate some Wisdom from Prison,want be no Money donation cause she is Broke Now...

C Breeze - You just locked in

Permalink Submitted by Daniel on December 10, 2017 - 1:13am
Don't you mean "locked up"? A bunch of Democrats are going to prison!!! Starting with Hildabeast. Hahahaahahaha!!!!!

Daniel, Repubs have been

Permalink Submitted by Daniel, Repugs ... on December 11, 2017 - 1:00pm
Daniel, Repubs have been saying that for a couple of decades but never come up with proof Clinton has violated any law. Keep dreaming!

If you're waiting to see

Permalink Submitted by C Breeze on December 9, 2017 - 4:06pm
If you're waiting to see Trump leave the "Oval Office",.. you'll have to wait until the end of 2024 ! signed// a recovering Democrat ! (NOTHING in this stale, "circling the drain" Democrat Party: neither Federal, State, nor Local can hope to recover over, at least, the next twenty years ! )

Very succinct. Thank you. And

Permalink Submitted by Daniel on December 10, 2017 - 1:14am
Very succinct. Thank you. And I wholeheartedly agree.