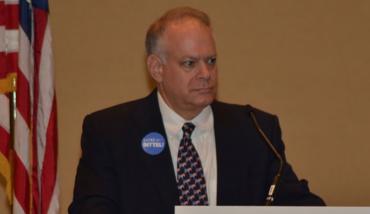 The chairman of the Florida Democratic Party — who has held the job for less than a year — is apologizing after facing allegations of “creepy” behavior which six former Democratic Party staffers and consultants said made them seriously uncomfortable.

The women, who contacted Politico Florida, said chairman Stephen Bittel repeatedly made “inappropriate comments,” gazing at young women and even inviting some to live the high life and hop onboard his private jet.

Between the comments, leering and invites to sail the skies with Bittel, the women say the FDP chair had created an unprofessional work environment.

Though the women said they were never touched inappropriately, fears of the possibility still existed. The women told Politico they did not want to be alone with Bittel.

Bittel’s body language and remarks, they said, did the talking for them.

And that’s not to mention the breast-shaped squeeze ball Bittel has been known to keep on his desk.

“There was a lot of boob stuff in his office,” said a former Democratic fundraiser. “I was told by other women not to go into his bathroom. I was warned.”

Other women said they found Bittel “demeaning,” saying he had a reputation among party loyalists and staffers who all knew what might happen if a woman was left alone in his company.

Bittel didn’t deny the allegations and offered an apology.

“Every person, regardless of their gender, race, age or sexuality should be treated with respect and valued for their hard work and contributions to our community and if any of my comments or actions did not reflect that belief I am deeply sorry,” Bittel told Politico. “I have much to learn, but my goal is and has always been to make sure every member of our party has a safe environment in which to succeed. It seems I’ve not been successful in that goal, and I will do better."

A real estate investor, Bittel has some serious jingle in his pocket and was well-known for being a prominent donor to the party before he decided he wanted to become chair.

Bittel’s term has not been without controversy, though. In June, he was ready to tender his resignation after he made racially-tinged criticisms about the state legislative black caucus over the summer.

The night’s schedule had fallen behind and Bittel was trying to speed up the speakers. Two Democrats — Senate Minority Leader Oscar Braynon (who is black) and House Minority Leader Janet Cruz — were cut from the program as a result.

The black legislative caucus was unhappy about Braynon being axed from the event, to which Bittel said “the black caucus members were acting like three-year-olds and childish.”

The accusations of inappropriate behavior come at a time when all eyes are scrutinizing the private lives of political officials and state lawmakers.

Last month, one of Bittel’s own — Sen. Jeff Clemens — resigned from office after reports broke of an extramarital affair with a Tallahassee lobbyist.

Republicans, too, have not been exempt from the accusations. State Sen. Jack Latvala is currently facing an investigation over allegations from six different women who say he sexually harassed them and groped them on multiple occasions.

Bittel and the FDP have been unusually quiet about the Latvala controversy, perhaps due to Bittel’s own problems.

Calls for the chairman’s resignation began coming in Friday morning, with more possibly on the way as the day goes on.

“These courageous women came forward with disturbing stories of harassment, and it’s our duty to stand in the gap for them and others in these situations,” Gillum said in a statement. “Although these allegations are not criminal, they clearly paint a picture of a hostile working environment for women.”

"No one should have to work in an uncomfortable environment," Graham said. "Bittel's behavior and the atmosphere he has created is unacceptable. He must resign."

"I have zero tolerance for harassment in politics or the workplace. It’s time to change the culture and it must start at the top," said Levine. "I hope Chairman Bittel does the right thing and steps down as Chairman. No individual should feel less than safe and comfortable in their workplace."

“The breadth and depth of these allegations speak to a larger problem with the environment in Tallahassee and more generally in our politics," King said in a statement. "The culture is not endemic to either party, and has gone unaddressed for too long. It’s time to match the courage of the women who spoke out and look at ourselves and the culture we’ve created and change it. The people of Florida need and deserve a fresh approach to our politics and leadership. I must now call for the resignation of Stephen Bittel.”

Even former FDP chair Allison Tant was calling for Bittel to step down Friday.

“These are young women who cannot trust their boss with their solitary presence,” Tant said. “They need other eyes to keep them safe while they work? It’s unacceptable.”

Accusations are the new

Permalink Submitted by Daniel on November 17, 2017 - 1:08pm
Accusations are the new evidence. But Bittel did admit it all. Al Franken also has but we don't see these same national Dems demanding Franken to resign, and he actually molested women!! However, those claiming that they did not assault any women should be believed until actual evidence comes against them. Using besmirching campaigns should be unlawful. Special hearings should be mandatory if all but murder allegations come out for up to one year before an election. This would prevent unsubstantiated rumors and false accusations from popping up, unless the hearing judge approved its release to the public based upon probable cause evidence.

Some women are afraid of

Permalink Submitted by C Breeze on November 17, 2017 - 11:56am
Some women are afraid of Santa Clause, Clowns, and even "old men" (even though they have NEVER been approached, touched, or even "propositioned" sexually (or otherwise):...... GET OVER YOURSELVES LADIES ! Sign up for some psychological counselling ... Take off your "Birkenstocks", about 20 lbs., and your "I Hate Men" button pins; the "Feminist Movement" got old & died for lack of facts... FACE IT,..there ARE MEN in the world, and they are NOT responsible for funding your IRA's with litigious 'settlements' to keep you and your cats in lifetime "food & litter".

I ain't had this much fun

Permalink Submitted by The Trapper on November 17, 2017 - 11:33am
I ain't had this much fun since the hogs et grandma! Since you evidently don't have to prove anything, I think he is guilty because he is a Demorat. Should resign immediately. On the other hand I just sent $100 to Roy out in Alabama. Roy is exactly the guy kind of guy we need in the Senate!

You are clearly a deranged

Permalink Submitted by Florida Woman on November 17, 2017 - 12:10pm
You are clearly a deranged pedophile. How long before you contribute to the "Latvala Groper Funds?"

Bittel seems to be a bit of a

Permalink Submitted by Tampaguy on November 17, 2017 - 11:22am
Bittel seems to be a bit of a "Bad Boy" with misogyny high one his list of "FEELS GOOD TO ME". Men in positions of power seem to feel "justified" with this sort of behavior --- especially the Socialist ones. Wonder if Debbie whats-her-name reversed this List with "Comey-esk" activities?

I find this article sketchy.

Permalink Submitted by Angie Roberts on November 17, 2017 - 11:13am
I find this article sketchy. No names of victims. Not one woman willing to give their name. Creepy? That's a personal definition. I think Bernie supporters are creepy, he writes papers on Women enjoying rape and 3 ways, yet they still support him.#independentleadersarenotdems. I have always found Stephen hardworking for our Party . I can bet Stephen provides restrooms for his staff other than his private toilet. Which is where I keep my pin up photos. I support Stephen in this case, not proven.