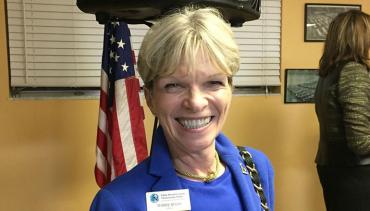 The race to become the next chair of the Florida Democratic Party continues to heat up, with one of the candidates -- Terrie Rizzo of Palm Beach -- announcing a slew of supporters endorsing her to take over next weekend.

On Tuesday, Rizzo announced the endorsements of 51 of the 182 electors who will cast their ballots in Orlando Saturday.

Rizzo’s lengthy and growing list of endorsements currently puts her in the lead in the four-woman race for FDP chair. Under the party’s weighted vote system, there are 1,237 votes possible in the race.

Rizzo has said she is confident in her chances at taking over the reins of the party, explaining she has 70 percent of the weighted votes needed to win.

Rizzo has received the endorsements of some of the top names in Florida Democratic circles, including South Florida U.S. Reps. Ted Deutch, Lois Frankel and Alcee Hastings.

Other local endorsements have flooded in all the way from Democratic strongholds like Orange County to smaller counties like Polk County.

Rizzo has served as the chair of the Palm Beach County Democratic Party since 2012 and is joined in the race by three other women from around the state who have also said they want in, though some of them have not officially declared their candidacies just yet.

Gonzalez currently works at the Hillsborough County Civil Service Board and is allegedly receiving the backing of FDP First Vice Chair Judy Mount, who said she wanted to run for the job but dropped out after Sunshine State News uncovered her unusual cart-before-the-horse declaration she was interim party chair — which she was not.

Stacey Patel from Brevard County has also said she’ll run for the seat next week. Brevard County recently sent the highest amount of delegates to the FDP’s conference in Orlando this year and won the “Golden Gavel” award for knocking on the most doors to get Florida Dems to the polls.

One of those women, Service Employees International Union (SEIU) Florida President Monica Russo also a possible candidate for the job, but Russo isn’t technically eligible since she isn’t a party chair or a state committeewoman.

That hasn’t seemed to dampen Russo’s ambitions, though, since the FDP has frequently been lax with its entry rules and could potentially open up the race to any candidates wanting to run.

The job was freshly vacated by chair Stephen Bittel, who was accused by several Democratic party staffers and consultants of inappropriate sexual comments and for creating a "creepy" and “unprofessional” work environment.

Electors will vote electronically for the next FDP chair Friday. The official FDP meeting will be held at the Rosen hotel in Orlando Saturday.

Four Women Prepare for Showdown to Become Next FDP Chair

Permalink Submitted by C Breeze on December 6, 2017 - 10:06am
"Feminism" continues to rear its ugly head.... ("What goes around always comes around.." and the "political climate" is ripe AGAIN for "momism" (Look it up "angry people"!)