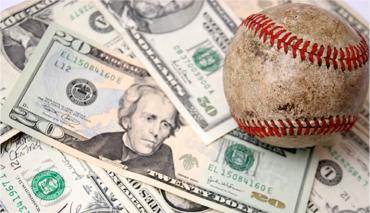 New Jersey won a landmark ruling from the U.S. Supreme Court Monday that means sports betting could begin in New Jersey in as little as two weeks, and in many other states lead to votes that could legalize betting on college and professional sports.

The justices ruled 7-2 that a 25-year-old federal law that has effectively prohibited sports betting outside Nevada by forcing states to keep prohibitions on the books is unconstitutional. The ruling could set the stage for other states to expand legalized gambling as a source of government revenue.

It was a victory for Chris Christie, former governor of the Garden State. Christie had challenged the Professional and Amateur Sports Protection Act, passed by Congress in 1992 to preserve the integrity of the nation's most popular sports. He and other proponents sought the ruling in order to help the state's ailing casinos and racetracks.

"Congress can regulate sports gambling directly, but if it elects not to do so, each state is free to act on its own," Alito said. "Our job is to interpret the law Congress has enacted and decide whether it is consistent with the Constitution. PASPA is not."

The president and CEO of the American Gaming Association, Geoff Freeman, predicted the demise of the sports betting ban during the Southern Gaming Summit two weeks ago in Biloxi, Miss.

"I can promise you," Freeman told the audience, "the days are numbered for the sports betting ban. And we have a 45-day window (before the Supreme Court decision) to get ready." But justices made and rendered their decision sooner rather than later.

The court's action could jump-start action in Congress to pass legislation calling for federal regulation of sports betting -- something the sports leagues would prefer over separate rules from state to state.

Congress passed the 1992 law to preserve what lawmakers at the time felt was the integrity of the games. But New Jersey and its allies argued that it ran afoul of the 10th Amendment, which reserves for the states all powers not delegated to the federal government.

Alito and six colleagues agreed, though Justice Stephen Breyer said the whole federal law should not have been declared unconstitutional. Ginsburg said the law should stand.

"The court wields an ax to cut down (the law) instead of using a scalpel to trim the statute," she said. "It does so apparently in the mistaken assumption that private sports-gambling schemes would become lawful in the wake of its decision."

Christie, who left office in January, signed the state's first law legalizing sports betting in 2012 after voters in 2011 overwhelmingly approved an amendment to the state Constitution to allow it.

Twenty states have bills ready to go to legalize sports betting. Florida isn't one of them.

On Sports Gambling, the Supreme Court Should Bet on Federalism

Does this mean Pete Rose will

All well and good,.. unless

Permalink Submitted by C Breeze on May 14, 2018 - 5:18pm
All well and good,.. unless you have kids in high school preparing for college; In that case, do them (and yourself) a favor and DON'T send them to a "sports addicted" college, the distractions are many, debilitating, and contrary to the reasons for a college education after all: "STUDY" and a "four year, or less, graduation goal" (unless you're an alumni [of a particular school] and into small-time "hero worship").

What we really need is

Permalink Submitted by EMS on May 14, 2018 - 1:11pm
What we really need is betting on college sports so that college athletes can supplement their income shaving points and throwing games!