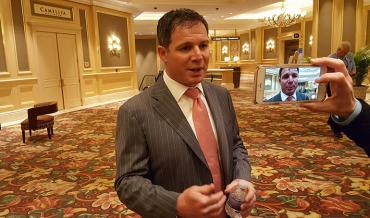 The Gaming Industry's biggest cheerleader has to be its boyish-faced leader, and right now he's cheering hard for an end to the ban on sports betting.

When Geoff Freeman, the 44-year-old president and CEO of the American Gaming Association, makes a case for "the good things" -- for example, the opportunities that lie ahead for states that embrace sports betting, you see lights shining in the eyes of his audience.

Speaking to the Southern Gaming Summit Thursday at the Beau Rivage Hotel and Casino in Biloxi, Miss., Freeman had his audience on the edge of their seats: "Repeal the sports betting ban at the national level and let states decide whether sports betting is appropriate in their jurisdictions" was his message and his hope.

Freeman outlined why Congress should act to reverse the ban, but warned that without proper tax rates and regulation, even legal sports betting could fail.

The decision of the U.S. Supreme Court on the New Jersey challenge to the national sports betting ban will have big implications for the gaming industry. That decision is due by June 30. "Either way," said Freeman, "it’s likely Congress will address the issue to prevent billions of dollars being poured into illegal sports betting annually."

Freeman explained how sports betting got before the high court.

For years, voters in the state of New Jersey have been trying to challenge the federal Professional Amateur Sports Protection Act of 1992 (PASPA) and allow sports betting in its racetracks and casinos. Residents voted in 2011 and 2014 to approve sports betting there. Then-Gov. Chris Christie signed a bill in 2014 attempting to make it legal under state law.

Major sports leagues like the NCAA, NFL, NBA, MLB and the NHL sued in 2012 and again in 2014 to stop it, and successfully argued that the PASPA law prohibits the Garden State from allowing sports betting.

The Department of Justice got involved and New Jersey lost decisions at every level. In 2016 a federal appeals court agreed that PASPA prohibited states from allowing sports betting.

But the Supreme Court took notice of the case and agreed to consider New Jersey's claim that the law is unconstitutional. If it rules in favor of sports betting in Atlantic City, the decision could pave the way for wagering nationwide.

"I see three potential outcomes," Freeman predicted. "Two of those are good, varying degrees of good. I think the least-likely outcome at this point is that the Supreme Court simply concurs with the lower courts and tells them they’ve done a great job. That’s not what the Supreme Court’s in the business of doing. It’s possible, but I think it’s the least likely. I give that one a 10 percent chance."

He gave a 30 percent chance to the second outcome, simply declaring the Professional and Amateur Sports Protection Act unconstitutional. That would instantaneously turn this thing over to the states, to regulate sports betting the same way they choose or choose not to regulate as other forms of casino-style gaming.

He gave a more nuanced position a 60 percent shot -- a position that sides with New Jersey, and throws the ball back into Congress’ court, to address the issue once and for all.

"The reason we see that as probably a more likely outcome is because this industry is well positioned to address it, due to the great work we’ve been doing as an industry over the past several years."

What the industry has to fight against is Congress or the states limiting where sports bets can be placed. "They're going to want to tell us, 'you can only bet by physically going into a casino,'" he said. "If you think that's going to be good for your business, you're wrong. The illegal sports betting industry will love you for it because they're still in business. You have to serve the customer, you have to make it easy for him to place his bet where that bet is taxed and regulated."

Since sports betting was banned everywhere but in Nevada in 1992, a lot has changed, Freeman said. Bills have been filed in 20 state legislatures (Florida isn't one of them) to accommodate sports betting.

"In 1992, we weren't trusted. The public's perception of our industry was so different," he said. "Today look at the technology we have to support us, today nine in 10 Americans have a favorable view of gaming. It produces $240 billion in revenue, creates jobs and supports community activities. We're a good neighbor."

Plus, Freeman pointed out, the partnership between the leagues and the industry is strong. Fan Duel and Draft Kings opened their eyes to what could be in terms of expanding their fan base. The average fantasy league player, for example, is 32 years old, college educated and makes $75,000 a year.

"The United Kingdom has shown us the power of a regulated sports betting market," Freeman says, "and that all the product needs is good policy."

The role of the gaming industry is to be a partner, to make sure integrity exists. The industry has to unify, and make its No. 1 goal putting the illegal market out of business.

"I can promise you," he told the audience, "the days are numbered for the sports betting ban. And we have a 45-day window (before the Supreme Court decision) to get ready."

During a break in the meeting Freeman told Sunshine State News he realized Florida was way behind, it's gaming picture "is a mess," but he's convinced the state will see the opportunities and seize them.

The Seminole Tribe and the Walt Disney Company have joined forces in an attempt to limit the expansion of gaming in Florida.

The two entertainment giants are financially supporting the efforts of the No Casinos initiative, according to news reports. By the close of 2017, the tribe and Disney Worldwide Services, a Disney subsidiary, had contributed a total $700,000 to the effort that put a state constitutional amendment on the November ballot.

The amendment would require voter approval for any new casinos in the state. It would not affect the tribe or its operations.

"Under Amendment 3, in order for a form of casino gambling to be authorized in the state, it must be approved by Florida voters through statewide voter initiative," No Casinos has said.

Maybe if we agree to only

Permalink Submitted by Eye See on May 7, 2018 - 6:40am
Maybe if we agree to only allow it at Trump casinos , as well as a roulette table or two along with a couple of Storm Daniels in Playboy bunny cocktail waitress outfits serving visitors to the White House ( hey , at least they could help pay for those ‘free tours’) , then we can flip the metrics and get the conservatives to support it and all of the ‘anything goes’ liberal socialists will be protesting against it - solely because they think they should resist any and everything Trump even smiles at .

Permalink Submitted by Mifer on May 6, 2018 - 9:35pm
If anybody here is interested in learning how to trade working from home I can suggest a website to you that I recently found and become a member to. The name of the website is Emini S&P Trading Secret, I believe you can find them on Google. Right now they are running a special too, they didn't have that special when I purchased. I never traded before in my life and now I love doing it thanks to Emini S&P Trading Secret, their way of teaching how to trade made it very easy for me to learn.

Permalink Submitted by Floridian on May 5, 2018 - 10:05am
Fascinating reading. Something you won’t find anywhere else. Why I follow this page.