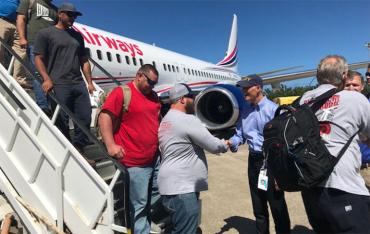 Hurricane Maria hit Puerto Rico five months ago, but Florida isn't ready to let up on recovery efforts just yet. On Monday, Gov. Rick Scott made another trip to the island, where nearly 450,000 people are still without power.

Scott arrived in Puerto Rico Monday morning and squeezed in several meetings throughout the day, holding a roundtable with Puerto Rican faith leaders as well as the Army Corps of Engineers, which have been working to speed up restoration efforts on the island since September.

The governor also met with Florida utility workers who are still on the island attempting to restore electricity to the hundreds of thousands of Puerto Ricans who have been living in the dark.

Earlier this month, the Florida Power and Light Company sent 140 workers to Puerto Rico to attempt to rebuild the island’s power grid, which was badly damaged after the Category 4 storm ripped through Puerto Rico in September.

The task has been monumentally difficult on account of downed power lines and trees which have made power restoration a time consuming process.

Other problems have plagued Puerto Rico since September, including the sale of the island’s private electric company, the Puerto Rico Electric Power Authority (PREPA).

PREPA promised to restore power to most of the island’s 3.4 million residents by December, but many were still without electricity as 2017 wound to a close.

Puerto Rico Gov. Ricardo Rosselló announced the sale at the end of January.

The problems haven’t ended there -- confusion over supply restoration has caused controversy in recent weeks. Last week, the Federal Emergency Management Agency told NPR  it would be ending disaster aid to the U.S. territory, cutting off food and water supplies it had been providing for the last few months.

FEMA said it was time to cut off aid since only one percent of Puerto Ricans need the it and said the agency would hand over the remaining food and water supplies to Puerto Rican officials for distribution.

Florida has seen an influx of Puerto Ricans coming to the state since September and over 215,000 Puerto Ricans have fled to the Sunshine State following the storm.

The number is only anticipated to grow -- Gov. Rick Scott said he expected more than 230,000 Puerto Ricans would settle in Florida by the end of 2018.

“As Puerto Rico rebuilds, Florida remains committed to doing everything we can to help the families impacted by Hurricane Maria and aid in the recovery process,” Scott said.

As Marie Antonette once said

Permalink Submitted by C Breeze on February 6, 2018 - 12:33pm
As Marie Antonette once said "Let them eat cake!" (Instead of allowing them to eat our precious bread). Send them home to Puerto Rico to clean up the mess the have ( for decades) been complicit in the "making"! "MOVE 'EM OUT ! HEAD 'EM NORTH !...GET ALONG LITTLE DOGGIES HEYAAAH!!!

So just what is Scott doing

Permalink Submitted by jerry on February 6, 2018 - 6:32am
So just what is Scott doing for them, nothing. A that won't be lost on them come election time.