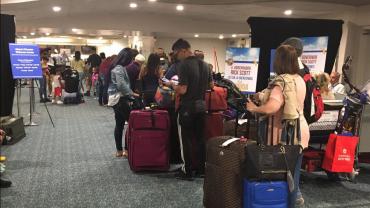 Florida will be receiving millions of dollars from the federal government as part of a grant program to help Puerto Ricans dislocated by Hurricanes Irma and Maria find work in the U.S.

On Thursday, U.S. Rep. Val Demings, D-Orlando, announced the Secretary of Labor had awarded the Sunshine State with $13 million for the National Dislocated Worker Grant, which gives states extra money to respond to large layoffs and an increased number of unemployed workers.

The grant will apply to post-hurricane evacuees from both Puerto Rico and the U.S. Virgin Islands, which were devastated by the two storms which struck back-to-back late last year. The Florida Department of Economic Opportunity will implement the grant statewide.

Over $4.3 million will be released initially to help evacuees get back on their feet. Nearly 300,000 Puerto Ricans have arrived in Florida since the storms.

Rep. Demings, whose district has seen an influx in evacuees coming to the area, welcomed people from Puerto Rico and the U.S. Virgin Islands to Florida and said she hoped the grant would help them find work.

“This is an important step towards restoring stability for thousands of Americans displaced by this year’s devastating hurricanes,” Demings, a founding member of Congressional Task Force on Puerto Rico Arrivals, said of the grant. “I want to say to every evacuee in my district: you are welcome here, and if you choose to stay, we will do everything in our power to help you prosper.”

The federal grant comes on the heels of an announcement earlier this month from Gov. Rick Scott, who pledged $1 million for an “investment” for 12 state workforce development agencies to help Puerto Ricans who relocated due to the storm.

Jobs development agency CareerSource will work in tandem with both the federal grant and Scott’s proposal to distribute the money from the grant and the statewide investment.

Much of the funding for the grant and Scott’s investment will be funneled to Central Florida and South Florida, where displaced evacuees have fled to following the storms.

“As families continue to move to Central Florida, the announcement of this much-needed grant comes as incredibly good news to all of us who are partnering to provide new and accessible opportunities to this new workforce,” said CareerSource Central Florida president and CEO Pam Nabors.

According to Scott’s office, nearly 8,000 people from Puerto Rico have sought career assistance services since being displaced from the U.S. territory last year.

“This investment will connect even more individuals with great jobs,” Scott said in a statement earlier this month.

Demings agreed on helping Puerto Ricans and Virgin Islanders who needed assistance in the workforce.

“Our post-hurricane effort should focus on two goals: first, we should ensure that every Puerto Rican and Virgin Islander who wants to stay in Florida can find prosperity and security here,” she said. “Second, we should give displaced families from Puerto Rico and the U.S. Virgin Islands the opportunity to return to reconstructed and thriving homes...I will continue to keep this issue front and center in the coming months.”

The reality is that the 13

Permalink Submitted by Ellen on January 27, 2018 - 3:58pm
The reality is that the 13 million will go to line the pockets of the usual suspects and not the Puerto Rican people. Follow the money. At best Puerto Ricans will be sent to useless high cost training programs that will in the end do very little; a big waste of time and money for the Puerto Ricans while those implementing and providing training will take a big chunk of the grant funds. It's the usual game.

Just give 'em airfare BACK to

These people will never go

Permalink Submitted by The Trapper on January 25, 2018 - 8:47am
These people will never go home. And we will never stop paying for them.

We the people of Puerto Rico

Permalink Submitted by Victoria on January 26, 2018 - 6:31am
We the people of Puerto Rico are American. We are home any where in the U.S.A. we choose to settle.