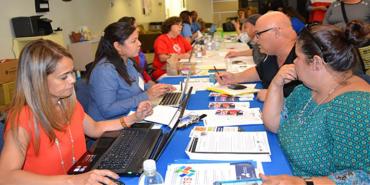 Florida was preparing for an influx of some 100,000 Puerto Rican refugees after Hurricane Maria. But two months after the monster storm paralyzed virtually anything normal about life on the island, Puerto Rican arrivals in the Sunshine State have already exceeded 200,000 -- and the surge is continuing.

Maria isn't the only force responsible.

While President Trump was scorched by the press for mentioning it, the island’s budgetary crisis has long been a reality. A steady tide of transplants has been pouring into Florida in recent years because of economic conditions on the island. Maria only exacerbated the exodus. The impact on the state of Florida is direct, and immediate.

In the days following the storm’s impact, Gov. Rick Scott began lending aid to the island. He also commenced setting up programs and set aside funding for assisting the arrivals. Those efforts will need expansion, as the Florida Division Of Emergency Management has estimated 208,000 residents have passed through airports in Miami, Orlando, and Tampa, just since October.

The Governor’s Office tabulated 8,500 students have enrolled in state schools from Puerto Rico and the Virgin Islands. The Department of Education and other agencies are moving quickly to implement programs that will ease the burden on the state system. For example, a lengthy list of state universities has waived out-of-state tuition and enrollment fees for new students displaced by the hurricane.

Scott declared a state of emergency in the state of Florida to specifically deal with the influx of the arrivals. There has already been a reallocation of state surplus funds, and in his new budget proposal he called for money to help both Florida residents needing storm aid, and programs dealing with the new Puerto Rican residents.

The largest fiscal question mark concerns federal assistance. Congress is already dealing with how much financial and infrastructure aid it will allocate for the recent rash of natural disasters. Florida has been designated over $600 million in relief to damaged regions. The state will receive a portion of the more than $7 billion in relief to go out to areas affected by storms in Texas, Puerto Rico, and the Virgin Islands, as well as sections of California dealing with massive wildfires in 2017.

Given that estimates of transplanted residents have already doubled since the state budget first was discussed publicly, expect a recalibration of the outlay for storm assistance to dominate the 2018 legislative session. How much, and where those funds will come from, are likely to be a continuing challenge.

I'll answer the question. If

Permalink Submitted by Karen on February 10, 2018 - 8:41pm
I'll answer the question. If Florida was wiped out, then I'd retire and move to someplace where housing is cheaper. Hopefully, I'd get insurance money for my home and I'd buy a much smaller home in Maine or New Hampshire. That's what I'm planning to do anyway when I retire. I hope I would be treated with more compassion and dignity than some of the people here feel for the Americans who have been displaced from Puerto Rico. We'd all have to go somewhere else and start over. Truthfully, I can't wait to leave Florida. The traffic is so bad, getting around anyplace is a major ordeal, and I just can't take the heat and humidity of the summers anymore. i love the multi-cultural vibe in Central Florida, as I love talking and getting to know people from different places, and I love the opportunity for so many cultural events, but I won't be sorry to say goodbye to Florida. I've lived here for 39 years, graduated from college here, worked as a guidance counselor in schools here for 31 years so far, but I don't think it's ever been "home." Most people feel that way about the place they came from. Most of the Puerto Rican's and the Venezuelans would return home in a minute if things were different. I cannot believe the bitterness and hatred I've seen posted here and it makes me sad.

Poverty has been a problem in

Permalink Submitted by Roger on December 6, 2017 - 12:42pm
Poverty has been a problem in Puerto Rico for generations and it won't be solved until the people themselves are willing to do the hard work it will take. It hasn't helped that they have repeatedly voted against statehood.

Permalink Submitted by P. onder on December 5, 2017 - 8:04pm
Hmmm I’d like to know where the hurricane relief is for Florida victims because I know several long term full time residents that still have not had one penny nor one finger of help with there destruction. How is it so readily available for these refugees? Why do they take precedence over fl state taxpayers??

Permalink Submitted by Mathew on December 4, 2017 - 3:10pm
As a resident, what would you do if Florida got wiped out as did Peurto Rico? My intent is for an honest thought out answer, non political

Permalink Submitted by Mathew on December 4, 2017 - 3:10pm
As a resident, what would you do if Florida got wiped out as did Peurto Rico? My intent is for an honest thought out answer, non political

Permalink Submitted by Pac on December 4, 2017 - 3:06pm
As a resident, what would you do if Florida got wiped out as did Peurto Rico?

Permalink Submitted by C Breeze on December 4, 2017 - 3:24pm
Move to Puerto Rico: Plenty of cheap property; Federal Taxpayer monies to help rebuild (and get rid of, and clean out the "packing crate" boxes former residents actually lived in; and NO FEDERAL TAXES for Island residents, etc.... DEFINITELY wouldn't move to South Florida (Way too many Puerto Ricans there !). I just might start a corporation in P.R. that manufactures and sells burglar alarms;...I hear there was a strong need for them and Iron grate fences & gates, before "Irma solved the imminent problem"...

I suppose it is too late to

Permalink Submitted by The Trapper on December 4, 2017 - 2:33pm
I suppose it is too late to put a $25,000 impact fee on everyone that wants to come here? Would not cover the costs taxpayers are expected to pay but be something. Only ones that don't have to pay are members of Congress. They have a secret slush fund the rest of us don't have. Ever look at where the Puerto Ricans live? Hovels is an upscale term. Based on tattoo's, they have plenty of money. Selling their food stamps for fifty cents on the dollar.

You can't say that I didn't

Permalink Submitted by C Breeze on December 4, 2017 - 1:47pm
You can't say that I didn't warn you this was going to happen:.... "Separatist" PR's "shot up" the Halls of Congress in 1947 to RESIST "Statehood"; They have "trashed" Puerto Rico ever since, "trashed" their "taxfree existence" in PR and ABANDONED PRico when their obviously "self-soiled existence history" was made untenable BY THEMSELVES. (Is it time AGAIN to suggest a "two State System" for Florida?!?) These "gypsy Puerto Ricans" historically "Krap-where-they eat" and then merely "change location and repeat" (They've been doing it to New York for over 70 years....and feel that they can freely "trash & move on" simply because they are 'classified' as "U.S. citizens"...but obviously not "good ones"). FLORIDA: These "gypsies" left their substandard hovels in Puerto Rico "while the getting was good"....and there's no apparent reason to believe that they won't recreate their "hovel existence" HERE !

Permalink Submitted by Anonymous on December 4, 2017 - 9:47am
Medicaid recipients in PR, which was 50% of the population, automatically qualified for Medicaid here for up to 1 year. We are in trouble.

Exactly what we expected.

Permalink Submitted by The Trapper on December 4, 2017 - 8:45am
Exactly what we expected. They have no job skills. They will not find work, or at least not easily and certainly not high paying jobs. They won't have to since they all qualify for welfare. They will need money for housing. Food. Medical, particularly natal care since they all have kids and most of the women are pregnant. They don't speak English. We don't want them anymore than we want MS-13 gang members. And we have plenty of them. How many new school busses do we need? Where are the kids going to go to school? Oh, don't worry, we will build new ones. Need more teachers. More teachers that speak Spanish. What's a few billion more? The only thing that they bring to the mix is that EVERY ONE of them will vote Democrat. Shift the political landscape of the state. The Florida we grew up in is about gone. This ought to put a few more nails in the coffin.

The Florida I grew up in is

Permalink Submitted by Anonymous on December 4, 2017 - 12:03pm
The Florida I grew up in is gone because of greedy land speculators and developers! ......not because of Puerto Ricans (no I am not Puerto Rican)

"Your" Florida is gone"

Permalink Submitted by C Breeze on December 4, 2017 - 2:06pm
"Your" Florida is gone" simply because of your politicians (and "YES", they ARE greedy), as well as your "election choices". (You can well add "Visit Florida" to that "destructive list"..!