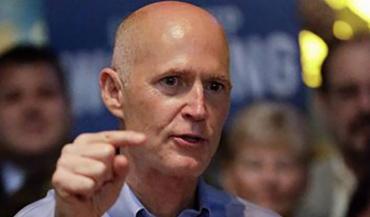 Rick Scott, two-time governor of Florida facing his term-limit year, has submitted his final state budget. And what a striking departure from his previous annual spending proposals it is. This time Scott is calling for a budget increase of $2.4 billion over 2017's.

That means, if he were to get his way on everything -- and be honest, he won't -- Florida would spend a record $87.4 billion.

Nevertheless, this may seem a baffling proposal from the man who has angered many on the opposite side of the aisle over the years for his aggressive spending and tax cuts. Even members of the state GOP -- the legislators who actually write the final budget --  have frequently been at odds with the governor's stark cuts. In his first year in office, remember, he pledged to slash $5 billion cut from the budget.

That forceful spending discipline was in a struggling economy when the state was operating with deficits. Since then, year over year, economic recovery has reigned, increasing state revenues. This year property values are on the increase, and those rising property taxes are a contributor to the flush new budget.

The main factor, however, has less to do with this being a lame-duck final year in office than it is on Scott’s aspirations going forward.

The governor is expected to challenge Democrat Bill Nelson for his U.S. Senate seat next year. Many pundits predict he will run unchallenged in the Republican primary, and that is usually where conservative spending policies rise to the top of campaign platforms. Without a competitor, Scott appears to be positioning himself for a centrist appeal.

The spending increases look at appealing to a broad demographic and attracting the attention of special interest groups. Those property tax revenues gave Scott the opportunity to call for more school spending and pay increases for teachers. Additionally he wants to increase the number of state workers, as well as bump up first responders' pay.

Hurricane Irma has also been a driving force in the expenditure increases. To go along with recovery efforts, housing programs are called for to help those victimized by the storm. Also, he has been eager to lend support to displaced Puerto Ricans flooding into the state after Hurricane Maria ravaged their island.

Scott is not alone in a possible softening of rigid budgetary standards based on future considerations. House Speaker Richard Corcoran, though a fellow Republican, has been a combative force over Scott’s prior budgets. The speaker has not been afraid to forcefully denounce any particular budget proposal from the governor.

But this year Corcoran has 2018 designs on the governor’s mansion. This may explain why, in the face of Scott's broad spending increase, he has so far been silent about the proposed record budget. Corcoran will need to tread carefully to appeal to his conservative base while being mindful of those line items moderates and others whose votes he covets watch like hawks.

For Scott, it's a clever move. He's already established himself as a strong fiscal conservative. By proposing spending increases in key areas -- even if a zealous Legislature chops them to smithereens -- he still impresses the fence-sitters because he tried.

exactly right, he is