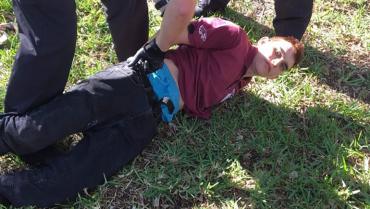 Nikolas Cruz, apprehended after he killed 17

The Broward Sheriff’s Office Union continues to push for change in Broward County’s PROMISE Program following last month’s mass shooting in Parkland -- even though for the most part, the Sheriff's Office itself and Broward County Schools are keeping mum on the controversial program some say results in "see something, say little or nothing."

Lawyers for the parents of two injured students, both 15, have sent letters of intent to file lawsuits against the agencies.

The PROMISE program was praised by the Obama administration and the Broward school district was awarded $54 million in grants from the $4 billion 'Race to the Top' initiative.

On Feb. 28 Sunshine State News reported possible ways the school system's PROMISE Program, and the aims behind it, may have stopped confessed shooter Nikolas Cruz from being arrested well before he killed 14 students and three teachers at Marjory Stoneman Douglas High School -- despite numerous allegations of criminal behavior. The PROMISE Program’s goal is to reduce the number of students arrested for minor infractions. But the pursuit of that goal may have stopped Cruz from entering the criminal justice system before carrying out the massacre on Valentine’s Day.

A Broward County Public Schools spokeswoman has since released a statement to SSN, saying “the District has no record of Nikolas Cruz committing a PROMISE-eligible infraction or being assigned the PROMISE while in high school.”

That would appear to close the door on the Cruz-PROMISE link, but it actually raises more questions for BSO Union head Jeff Bell.

Taking BCPS’s statement at face value, Bell says, “There’s no documented report that he was ever enrolled into the PROMISE Program. But that doesn’t mean he wasn’t confronted with something and just let go.”

In our previous reporting on the PROMISE Program, we provided a link to the formal agreement between Broward County Public Schools and several law enforcement agencies. Page seven of that document shows several possible actions a school can take prior to formal enrollment in the PROMISE Program. Following an allegation, administrators may choose to speak to the student’s parents or even just issue a warning.

According to Bell, lesser punishments such as those may have not been recorded, making BCPS’s statements technically true. But the goals of the PROMISE program -- keeping students out of the criminal justice system when possible -- would have motivated school officials to issue a warning or suspension rather than involve BSO or another law enforcement agency.

There are several reported examples of Cruz committing alleged crimes while a student at Stoneman Douglas. In a Buzzfeed report,  students say Cruz was involved in a number of fights on school grounds. They also say he sent several online messages threatening violence, and students say they told school administrators about the threats.

Cruz brought a backpack with bullets to school, which got him banned from bringing a backpack to school in the future. He told a fellow student, "I'm going to go there [the high school] and shoot it up." Local police made at least 18 visits to the Cruz home because of his actions, including holding a gun to a relative's head.

The Miami Herald has detailed it here and here: Last November the police got a tip that Cruz "could be a school shooter in the making," but deputies did not even write up a report on that warning. And the FBI has admitted that it received at least two tips, one warning that Cruz was a possible violent threat. But the Florida Department of Children and Families determined that Cruz was not a threat to himself or others at the time of their investigation because he was in therapy.

Enea Sabadini, who was involved in those fights with Cruz, says one of them resulted in a suspension for both students. Cruz was also eventually expelled from Stoneman Douglas and transferred to another school. It’s not as though Cruz was never punished. But at this point, it appears law enforcement was never contacted.

As stated in SSN's earlier story, any misdemeanor hearing that resulted in court-mandated mental health counseling could have denied Cruz access to weapons. In addition, he could have been charged with federal cyberstalking for allegedly sending threats to his classmates. Broward County requires those released on bond for felony stalking charges to surrender all weapons.

Those are abject system failures, contend many authorities -- and it was only those failures -- that made it possible for Cruz to buy his assault rifle legally.

Though Broward Schools denies a PROMISE-Cruz link, SSN has reached out to clarify whether that program or any other stopped Cruz from being arrested for alleged threats or violence prior to the shooting. No response is yet forthcoming. Broward County School Superintendent Robert Runcie, who first instituted the PROMISE Program, has also yet to comment publicly on why Cruz was never referred to law enforcement.

BSO Union President Bell maintains support for the PROMISE Program and the civil citation program but wants officers to have more authority to make arrests. He says that would allow the school system to accomplish its goals while allowing law enforcement to deal more effectively with problem students.

In the statement Broward County Schools sent to Sunshine State News, it says “there is no intent to limit or tie the hands of law enforcement in doing their jobs or addressing school safety.” No matter the intention, Bell maintains his deputies’ hands are indeed tied and changes need to be made. And many in the community, including Douglas High students, are asking if it wasn’t the PROMISE Program that shielded Cruz from arrest, what did?

The program is not the

Permalink Submitted by Timekeeper on March 22, 2018 - 10:04am
The program is not the problem but rather the school administration for a lack of response to the incidents. Having spent 40 years in law enforcement and 8 years as an Asst. Superintendent of a Juvenile Detention Center I can tell you that these programs can save a kid and redirect but it first has to be implemented by those responsible when the situation presents it self. The fact that there were numerous occasions that Cruz met the criteria and he was not dealt with through the program says a lot. It is easy for people to be critical but before they open their mouth they should know what they are talking about.

Perfect response of a

Permalink Submitted by Truth on April 4, 2018 - 9:36pm
Perfect response of a government worker. Nothing.

School said Cruz had no

Permalink Submitted by Hock145lisa on March 22, 2018 - 12:02am
School said Cruz had no Promise Program incidents. What BS. How is making threats, saying he wanted to be a school shooter, & stalking not be quailed as severe enough incidents? It makes me terrified what else these libtarded social justice morons are letting go.

Utter nonsense is the correct

Permalink Submitted by Melissa Griggs on March 19, 2018 - 10:01am
Utter nonsense is the correct name for Promise Program. Hopefully Sen. Rubio can get his bill thru the "do nothing Senate" to defund this nonsense that is leaving teenaged hoodlums running free on our nation's streets.

The "Promise Program" IS, WAS

Permalink Submitted by C Breeze on March 10, 2018 - 4:39pm
The "Promise Program" IS, WAS, AND WILL CONTINUE TO BE" utter nonsense foisted upon us by the phony "social experiments" of the seriously flawed "Obama Era", unless logic & common sense is returned to the forefront of our American Republic.