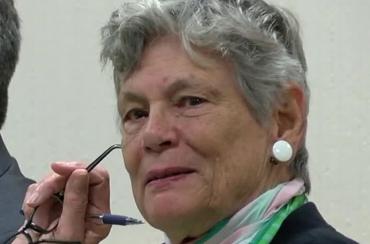 Environmental activist Maggy Hurchalla's appeal of a $4.3 million judgment by a Martin County jury on Feb. 14 has not gone well for her. At least, not until now.

Now Hurchalla, a former longtime county commissioner and one of Martin County's most prominent citizens, says she has evidence the jury foreman in the Lake Point Restoration tortious interference case against her was not a Martin County resident, as required by law -- grounds for a mistrial.

The Fourth District Court of Appeal has denied or dismissed most of Hurchalla's motions, including a previous request for a new trial, in a case she lost in Martin County Circuit Court.

Lake Point claimed Hurchalla had lied to county commissioners about destroying wetlands on their property in western Martin County to convince the county to end its contract with SFWMD. After an eight-day trial, the jury agreed Lake Point's business had been damaged by Hurchalla's actions.

The appellate court motion filed June 18 actually is Hurchalla's third request for a new trial. She asked Circuit Court Judge William Roby during the first day of testimony in February's civil trial either to recuse himself or to declare a mistrial, based on her claim the judge was biased. Roby denied her request.

Hurchalla asked again for a new trial when the case reached the appellate court in March, a motion that also was denied; however, she now may get that new trial after all.

In her newest motion, Hurchalla asks the appellate court to relinquish their jurisdiction to the Martin County Circuit Court so she can present evidence of alleged juror misconduct. She claims the jury foreman in the civil court trial, Steven Hursh, was actually a resident of Highlands Ranch, Colo., at the time.

If Roby finds her claims credible, he could declare a mistrial, rendering the jury's judgment moot and ending Lake Point's garnishment of Hurchalla's approximately $2 million in financial assets. A trial to determine which assets are exempt from garnishment was set for July 31.

According to the appellate court filing, Hursh owns a family business, SteamPro Inc., in Highlands Ranch. The new evidence was allegedly revealed in a personal letter brought to Hurchalla's attention by an informant.

The letter was received by an home owner's association (HOA), in which Hursh reportedly compared the HOA officers to the allegedly fraudulent actions of Hurchalla.

In addition to misrepresenting his Martin County residency to the court during the vetting of jurors, according to Hurchalla's motion, Hursh also allegedly failed to reveal two misdemeanors for spearfishing four Florida spiny lobsters in 2006, for which he was fined and banned from Monroe County waters during a probationary period. Hurchalla claims Hursh's convictions would result in bias toward environmentalists.

Neither the Lake Point attorneys nor Lake Point partners could be reached for comment on whether they will renew their lawsuit against Hurchalla if a mistrial is declared.

Hurchalla stood at the defense table in the Martin County courtroom on Valentine's Day wearing a slight smile as the jury's verdict was read. The jury had taken only 90 minutes to find Hurchalla, sister of former U.S. Attorney General Janet Reno, responsible for interfering five years earlier in Lake Point's contracts between the county and the South Florida Water Management District.

Even after the amount of the damages was read -- $4,391,708 -- Hurchalla's smile remained, although her eyes cast downward to the table top on which her fingertips rested.

The Appeal Is Filed

Although the jury's decision was rendered Feb. 14, the judgment was not officially filed in court records until March 7, due to a delay caused by Sherlock's motion to dismiss a non-existent count.

Coincidentally, court records revealed that new signature cards for Hurchalla's Bank of America checking accounts totaling around $60,000 were issued March 6, the day prior to the entry of the final judgment, to establish shared ownership of Hurchalla's accounts with her husband, James.

Ovelman asked the court to hear a writ of prohibition to reverse the lower court's denial of Hurchalla's motion to disqualify Roby, who presided at the Lake Point trial.

Hurchalla had accused the judge of bias and had asked him during the second day of the trial either to recuse himself or declare a mistrial on motions by her attorney, Virginia Sherlock. Roby denied both motions.

Ovelman also asked the appellate court to stop the hearing scheduled before Roby in Martin County Circuit Court on May 10 to levy sanctions against Hurchalla and Sherlock for delaying entry of the final order, which also was denied. At the May 10 hearing, sanctions that totaled around $7,000 in fees, interest and costs were levied in response to the delay. The judge ordered that the amount be split between Sherlock and Hurchalla.

Ovelman also filed a petition for a writ of mandamus to force the judge to turn over an apology letter that Hurchalla alleges had been offered to her by Roby to end the Lake Point litigation, along with a request for an emergency hearing. Roby contested Sherlock's claim that he wrote an apology for Hurchalla to sign.

The emergency hearing was denied, the court adding that the case will be heard in the normal course of business. The writ of mandamus also was denied but with the option to refile it, which Hurchalla did last week.

Ovelman also asked the appellate court to review Roby's ruling that an amended civil complaint does not include previous counts, unless carried forward in the new complaint, the basis of the court's sanctions on Hurchalla and Sherlock for deliberately delaying imposition of the jury's verdict.

Sherlock insisted that one of Lake Point's first counts, which had been dismissed, had nonetheless not been properly disposed, thus it required a post-judgment hearing. Roby disagreed.

The appellate court kicked back Hurchalla's initial appeal for procedural errors, then after the complaint was refiled, questioned why her attorneys had not asked for a final appeal of the jury's decision.

Sherlock requested a final appeal on April 20, in conjunction with Ovelman's earlier filings.

No hearing date has been set for Hurchalla's June 18 motion.

Barbara Clowdus, editor and publisher of Martin County Currents, has been covering the Lake Point story since the last quarter of 2012.

Ruling in Hurchalla Lake Point Case Delayed by Yet Another Hearing

Permalink Submitted by yessir on June 22, 2018 - 4:54pm
that whole Martin County group is as dirty as they come, none more so than Lake Point...

Well, I'm guilty but I cry

No mistrial. She had plenty