Ruling in Hurchalla Lake Point Case Delayed by Yet Another Hearing 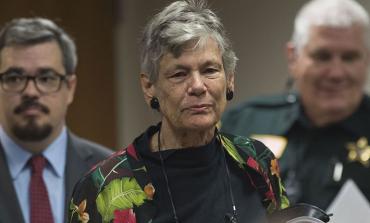 Hurchalla filed a procedural complaint against the western Martin County rock mine, and also asked the court to consider a filing made nearly five years ago in the Lake Point case. The hearing is Wednesday, Feb. 28, at the Martin County Courthouse before Judge William Roby.

Hurchalla asked for Roby's recusal in the SFWMD case based on Hurchalla's perception of political bias during her own jury trial Feb. 5-14, in which she lost. The motion was denied Feb. 22 based on Florida's rules of judicial administration with no comment from the court.

It was the second time Hurchalla charged Roby with bias, and the second judge that Hurchalla demanded be recused in the civil case that has spanned more than five years. Filed by Lake Point Restoration in February 2013, the 2,200-acre rock mine and water restoration project in western Martin County charged that Hurchalla had misrepresented its project to Martin County commissioners and others in an attempt to cancel the county's contract with Lake Point and the SFWMD.

Sherlock's motions, delaying the Valentine's Day verdict against Hurchalla for interfering in Lake Point's contracts, objected to two things: First, that Lake Point attorney Ethan Loeb had not submitted the proposed order to Sherlock for approval of the language prior to forwarding it to the judge to sign, and second that Lake Point's count for injunctive relief against Hurchalla, which had been dismissed in October 2013, be heard again.

Lake Point charged that Hurchalla's motive was to delay imposition of the jury's verdict and to re-frame the trial's outcome by having one count of Lake Point's complaint dismissed, although it had not been heard during Hurchalla's trial, according to court records.

At the time of the initial ruling in October 2013 asking for the injunction, Circuit Court Judge Thomas McCann ruled that the damage to Lake Point's business as the result of Hurchalla's alleged interference had already been done, so filing an injunction to stop her from causing further damage would be a moot point, according to court records. His ruling left the door open (without prejudice) for Lake Point to rewrite and resubmit its complaint to the court within 20 days.

Lake Point chose not to rewrite that count.

Now Sherlock has asked for the additional hearing to rule the count be dismissed with prejudice as part of her objection to submission of the final order, which she says violates the rules of civil procedure as currently written.

Sherlock herself broke some rules of civil procedure early in the Hurchalla trial, according to court records, prior even to opening arguments, when she submitted an order to the judge for his signature without Lake Point's prior approval of its wording.

In that instance, the court's order was to prohibit Lake Point from introducing into evidence against Hurchalla the results of the arbitration of its public records case against Martin County that Lake Point won, of mentioning the delay in receiving public records from the county, or the pending criminal charges against county commissioners.

The prevailing side in a court hearing often writes the formal order for the judge to sign, which both sides review and usually jointly approve prior to submitting it for the judge's signature. Sherlock submitted the order banning arbitration results to the judge as the courtroom was being set up for opening argument's in Hurchalla's trial.

Sherlock had added to the order, however, that none of the evidence used in the public records case could be used in Lake Point's case against Hurchalla.

“This goes way, way, way, way beyond your order,” said Lake Point attorney Ethan Loeb, who told the judge that the evidence in the public records case lay at the heart of Lake Point's case against Hurchalla.

The judge agreed that he had never ordered that the same evidence could not be used; only the outcome of the case that resulted in Martin County having to pay $502,000 in sanctions for violating public records laws through the actions of three of its commissioners. He struck the sentences that Sherlock had added to his order.

In addition, during submission of evidence during the trial, the judge admonished Sherlock's partner, Howard Heims, for not following Roby's pretrial rules for objections, which had been agreed upon in advance.

Sherlock's charge of bias was the result of events on the first day of trial testimony, prior to the jury's return to the courtroom after a lunch break. Hurchalla and her defense team conferred with the judge at the bench to ask Roby for an immediate recusal or to declare a mistrial.

They had met privately with the judge earlier in the day, following the trial's opening arguments, at the judge's invitation to seek a settlement after observing the jury's reaction to opening arguments, particularly after hearing the county's apology letter to Lake Point. The judge had prepared a sample of an apology that Hurchalla might offer to Lake Point that might end the proceedings; however, Hurchalla had said that such a settlement was one-sided and unfair, according to court testimony.

Sherlock remarked that the judge had insisted Hurchalla sign a letter of apology.

“Ma'am, I never suggested she sign anything,” said Roby, in court testimony. “I don't know why you're making that representation.”

Sherlock also claimed that the judge's demeanor had changed toward her defendant following their early morning meeting. Hurchalla testified that she could see the judge's facial expressions – rolled eyeballs during Heim's cross-examination of witnesses – although Loeb demonstrated by sitting in Hurchalla's chair at the defense table that the giant TV screen that dominated the center of the courtroom also completely blocked Hurchalla's view of the bench.

Loeb asked her, “Are you testifying to the court that when you're sitting in that chair, that you can see what the judge is doing from that chair?” Hurchalla said, “Yes.”

Although happy with her defense counsel and with the jury, which Hurchalla admitted would decide the case based on the evidence, Hurchalla said her concern in getting a fair trial lay only with the judge's rulings of law.

The hearing will begin at 9 a.m. in Roby's courtroom Wednesday, Feb. 28.