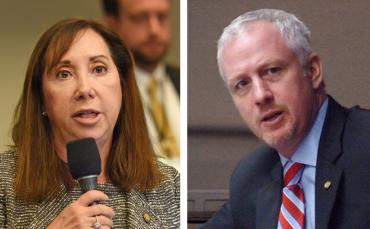 State Rep. Lori Berman will be resigning from her post in the Florida House of Representatives and making a run for an open Palm Beach County Senate seat, Berman announced Tuesday. The Lantana Democrat tendered her resignation in an official letter sent to Secretary of State Ken Detzner on Tuesday. Berman’s resignation will be effective April 9 of next year.

"I hope to continue working on behalf of the people of Palm Beach County, fighting for women's rights, seniors, public schools, gun violence prevention, and boosting economy opportunity for all Floridians," Berman wrote.

Berman confirmed she would be running in a special election for the Senate District 31 last month. SD31 covers Lake Worth, Boynton Beach, Delray Beach and Greenacres.
The seat was vacated last month after a POLITICO Florida report published details of an extramarital affair between former Sen. Jeff Clemens and Tallahassee lobbyist Devon West.
Hours later, Clemens resigned.
He had served in the Florida Senate since 2012 and held the coveted position of incoming Senate Minority Leader.
Berman's resignation seals her run for the Senate seat and will force Gov. Rick Scott to call yet another special election to replace her in the Florida House. Berman has represented Florida's 90th District since 2012 and previously represented the state's 86th District from 2010 to 2012. Berman's Resignation. Click to enlarge
Last month, Berman said she hoped her campaign would help women get on an even playing field in a field where men dominate.
“We’re in the midst of a watershed moment in the struggle for women’s rights across this country and one of the key motivators in my decision to do this is our state’s need for a champion on issues ranging from pay equity to healthcare and reproductive rights to freedom from sexual harassment and workplace discrimination,” Berman said. “My message is simple: now more than ever, women need a strong voice in the Florida Senate.”
Berman isn’t the only one with her eyes on the seat, though. Former Democratic state Rep. Irv Slosberg also said he was going to run for the seat as well.
Slosberg has extensive history in Tallahassee, serving on and off in the Florida House of Representatives from 2002-2016.
Slosberg has had his sights set on the Florida Senate for years. He’s made two different bids for the title of “state senator,” running in 2006 and in 2016.
His  latest attempt for a Senate seat was last year but he was defeated in the primary election, taking 32 percent of the vote compared to Clemens’ 52 percent.
Another slew of contenders is possible from the Palm Beach County Commission -- County Commission representatives  Dave Kerner and Mack Bernard’s names have also been tossed around as possibilities, though neither has explicitly said they intend to run.
Delray Beach Mayor Cary Glickstein is also rumored to be contemplating jumping into the race.
A special primary election will be held for the SD31 seat January 30, 2018 and a special general election will be held on April 10, 2018, which means the district will go the entire 2018 legislative session without representation.

Permalink Submitted by C Breeze on November 23, 2017 - 12:20pm
Berman, "..hoped her campaign would help women get on an even playing field in a field where men dominate.." (Has Berman NOT read the 19th Amendment to our Republic's Constitution [ratified in 1920]??? EQUALITY IS THE LAW OF THE LAND Ms. Berman; BUT YOUR rhetoric is simply that: RHETORIC that you "hope" (will propel you to a higher position on the "government mammary")... Doesn't seem like you deserve it though.... {VOTERS: Ms. Berman's rhetorical statement above, SAYS IT ALL about her 'plans' for HERSELF !} One MUST "work" to enjoy the benefits provided by our U.S. CONSTITUTION,..and "gratitude" expressed for those solely "American" benefits is a "MUST". "Political Rhetoric" is a pandering ploy: Witness the worthless and duplicitous "hope & change" false rhetoric employed by B. Hussein Obama.