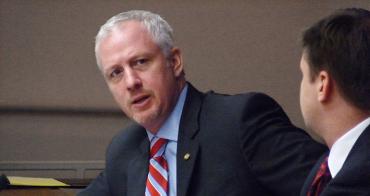 In a whirlwind 24 hour timespan, incoming Senate Minority Leader Jeff Clemens, D-Lake Worth, resigned from office Friday after reports swirled he had been caught in an extramarital affair with a Tallahassee lobbyist.

"I have made mistakes I ashamed of, and for the past six months I have been focused on becoming a better person,’’ Clemens said in a statement. “But it is clear to me that task is impossible to finish while in elected office. ... Though they have been aware for some time now, I apologize again to my wife, my family and anyone and everyone that I have treated poorly in the past for putting you through this in such a public way.’’

POLITICO first reported about the scandal on Friday. By mid-morning, Clemens had gone dark on social media, deleting his Twitter account as the headlines went out about his private life.

He admitted and apologized for having an affair with lobbyist Devon West, who was recently tapped to work for the Broward County Board of County Commissioners.

“I used poor judgment and hurt people that I care about, and for that I apologized long ago,” Clemens told Politico. “But I also owe my constituents and colleagues an apology and I intend to do just that.”

According to the report, the affair became public after West obtained Clemens’ laptop computer. West allegedly rummaged through the laptop, gaining access to all of Clemens’ contacts and personal information and informed Clemens’ wife of the affair.

Politico wrote that Clemens then went to Senate Budget Chief Jack Latvala, R-Clearwater, about the affair and asked him for help.

Latvala enlisted Sen. Oscar Braynon, D-Miami, to do damage control because he lived in the same apartment building as West. West left Clemens’ laptop with the concierge of the Tennyson condominium complex for Braynon to pick up.

Clemens apologized for the incident repeatedly and said he would be “seeking forgiveness” for the affair.

Clemens was set to take the reins of the Senate Democratic Party in 2019 and has represented parts of Palm Beach County in Tallahassee since 2012. He had recently been credited for the first glimpse of success the Florida Democrats had seen in quite some time when he led Annette Taddeo's campaign against former Rep. Jose Felix Diaz in a Miami special election earlier this year.

Taddeo narrowly defeated Diaz and now represents Florida's 40th Senate District, which was formerly represented by Frank Artiles, who also resigned from office this year after making racially-charged comments at a black lawmaker.

Prior to his stint as a Florida senator, Clemens served one term in the Florida House of Representatives.

Gov. Rick Scott will now call a special election to replace Clemens, who handily won his elections each time he ran for office.

Sunshine State News contacted both Sen. Clemens and Sen. Braynon’s office for further comment but had not received a response at the time of this story’s release.

This is a developing story. Check back for updates.

I met Jeff Sessions at the

Permalink Submitted by Cindy on October 31, 2017 - 5:11pm
I met Jeff Sessions at the Boynton Beach City Hall and My stomach turned. I didn't know about his cheating affair till the other day but that sure explains the illness in my stomach. A LIAR AND A CHEAT this was the person representing us the American People. I did NOT vote for him and he DID NOT represent me as a citizen. Lies, Deceits, Traitor to his wife and family and to the American People. The only place that He will find redemption is in Jesus Christ for He is the Redeemer. There are consequences and I am sure he is dealing with them now.

what did he think would

Permalink Submitted by surprise on October 30, 2017 - 9:38am
what did he think would happen? with a lobbyist who is playing on both sides of the fence and sleeping on both sides as well...just desserts.

Yes, he is gone now but there

Permalink Submitted by The Trapper on October 28, 2017 - 10:58am
Yes, he is gone now but there are plenty more hiding in sewers and under rotting piles of campaign signs. And of course he is "ashamed" of his behavior. Does that mean he got kinky with this poor woman? Besides being a pondscum sucking politician, is he also a sexual deviant? Did he make her DO things? Since she is a political operative in Broward I suspect there is little she wouldn't do. Still, being a rabid sexist I am inclined to forgive her.

So Clemens goes to SENATOR

Permalink Submitted by Charlotte Greenbarg on October 28, 2017 - 7:52am
So Clemens goes to SENATOR LATVALA for damage control? The same LATVALA who would be Governor? You can’t make this stuff up!

No you cannot make this stuff

Permalink Submitted by Tallywally on October 30, 2017 - 10:23am
No you cannot make this stuff up. The Approps Chair is an experienced hand in Human Resources. (eyeroll) Latvala should just raise money for Ed Hooper and be done with this silliness of running for Governor. There is probably way more there than just this. He would get slaughtered if he stayed in the race. Some people are so out of touch with reality.

When a person declares "I'm a

Permalink Submitted by RepublicanConscience on October 28, 2017 - 6:28am
When a person declares "I'm a Democrat" they are warning everyone that, they think laws, ethics, and morality do not apply to them. BTW - Corine Brown is still not in jail. She should have been marched into jail when found guilty.

The Democrats must have

Permalink Submitted by Lynn on October 27, 2017 - 7:39pm
The Democrats must have knocked him to the pavement.

Why would the mistress inform

Permalink Submitted by littlebee on October 27, 2017 - 7:05pm
Why would the mistress inform the wife of the affair?

My guess is the mistress

Permalink Submitted by Curious one on October 27, 2017 - 9:22pm
My guess is the mistress found out she was not the lone mistress.

Permalink Submitted by Tampaguy on October 27, 2017 - 6:49pm
GREAT NEWS! Another democRAT crawls away from the Florida Swamp...