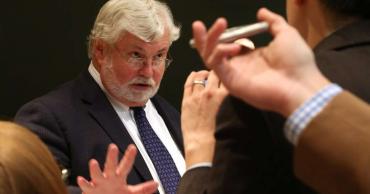 Florida Democrats are finally weighing in on Jack Latvala’s sexual harassment scandal rocking the Florida Capitol, calling on the Clearwater Republican to leave Tallahassee for good and resign.

Latvala was accused by six different women in a POLITICO Florida article of making inappropriate comments and groping them, prompting the former Senate Budget Chief to launch an all-out offensive against the accusers and the allegations he had acted improperly.

On Tuesday, the Florida Democratic Party said Latvala’s behavior was “unacceptable,” claiming there was “no place for it” in government or in Florida.

"Using a position of power to harass, touch, demean and pressure women—or anyone else— is wrong, plain and simple,” said FDP spokeswoman Johanna Cervone.

Cervone and the FDP pounced on what some have deemed a “smear campaign” against Senate staffer Rachel Perrin Rogers, who is the only woman to publicly identify herself in the allegations.

Latvala and his team of attorneys have been making calls to media outlets in recent weeks, leaking hundreds of text messages which they imply convey a chummy relationship between Rogers and the senator.

Fearing for her safety, Rogers has asked for armed security to accompany her around the Capitol, where she works as a senior aide to future Senate President Wilton Simpson, R-Trilby.

“He must resign,” Cervone said, then taking a shot at Senate President Joe Negron. “Instead of taking steps to discourage this behavior, Joe Negron's mishandling of the complaint filed against Latvala has resulted in an environment where women continue to feel unsafe and afraid to come forward.”

The FDP’s statement comes over a month after the first story about the accusations against Latvala was released -- and also on the heels of a dark chapter in the FDP’s history.

Just a few weeks ago, FDP chair Stephen Bittel announced he would be stepping down as the head of the party after several Democratic staffers and consultants said he made inappropriate comments and gazes at them, creating an “unprofessional” and “creepy” work environment.

It didn’t take long for other Democrats to chime in, perhaps feeling emboldened by their party’s statement.

“It’s time for Senator Latvala to resign from the Senate,” Gillum said in a statement Tuesday. “His intimidation of a sexual harassment victim is repulsive and disgusting, as is his alleged behavior. I believe these women, and we need Florida’s Capitol to be a welcoming place for all people — not a place where sexual harassment victims need police protection.”

Former U.S. Rep Gwen Graham and other Democratic gubernatorial candidates, too, called for Latvala to resign.

"Of course, Jack Latvala should resign,” she said. “It's insulting that he hasn't yet. It's equally infuriating that he has been allowed to abuse his political power to cowardly intimidate his victims. By continuing to harass those he attacked, he is doubling down on his unethical behavior and undermining the investigation. Enough is enough. The Senate should vote to expel him.”

“Our state needs to be focused on moving forward,” said Miami Beach Mayor and Democratic gubernatorial candidate Philip Levine. “Employee intimidation and workplace harassment can never be tolerated—in our legislature or anywhere else! Jack Latvala must resign.”

Democrats aren’t the only ones who have gotten vocal on the accusations.

GOP senators, too, made their opinions known about the allegations on Tuesday, condemning Latvala’s behavior in recent weeks.

“This highly respected and regarded establishment is being burnt to the ground and I feel Senator Latvala is running around with the Napalm and the matches,” state Sen. Travis Hutson, R-St. Augustine, told Politico Florida.

The investigation against Latvala is ongoing.

Fighting back in the "Old

Permalink Submitted by RGB on December 6, 2017 - 10:19am
Fighting back in the "Old Ways" will not help his case. Immediate resignation is seen as admitting guilt or the lynch mob scared the villain away. Keeping his mouth shut, nose clean, and letting the process run it's course may serve ALL parties better than what we're seeing now.

Permalink Submitted by C Breeze on December 6, 2017 - 9:27am
"Step back Jack !" Time to go. Public opinion is "stacked against you"; "Evidence be damned",..You've been condemned by a "show of hands"; and your alleged "friends" are all "fair weather types" who will never "stand in the stirrups and cut the rope used to hang you"....

Permalink Submitted by John Pru on December 6, 2017 - 12:49am
Not defending bad behavior - but let the process play out! Be patient - the truth will prevail! People in the process should settle down - a cultural shift is happening and a lot of folks participated in the "playful" culture that has existed in the halls of power for decade. Folks calling for resignation need to make sure they've lived perfect lives because in the world of politics - quick judgments will come back to haunt. Patience!!! Again, not defending bad behavior but there are a lot of glass houses! Look cautiously on those throwing the rocks! Just saying!

This is all getting boring

Permalink Submitted by Lynn Anderson on December 5, 2017 - 6:28pm
This is all getting boring and full of BULL. Sure the Democrats want him out of there. As far as Bittel is concerned, he shouldn't have been forced out. Some women complained that he leered at them. What a bunch of hogwash. All these sexual harassment allegations are out of control.