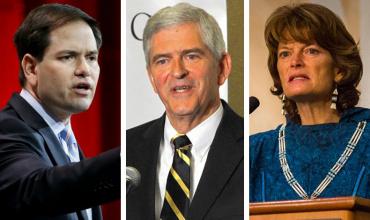 At the end of last week, U.S. Sen. Marco Rubio, R-Fla., and U.S. Sen. Lisa Murkowski, R-Alaska, announced they would champion in the Senate U.S. Rep. Dan Webster’s, R-Fla., proposal for the  U.S. Commerce Department to increase regulation on the international shark trade.

Last month, Webster, who is the vice chairman on the U.S. House Water Power and Oceans Subcommittee, unveiled the “Sustainable Shark and Fisheries Trade Act” which modifies the High Seas Driftnet Fishing Moratorium Protection Act. The proposal has support from both sides of the aisle with three members of the Florida delegation--Republican U.S. Reps. Gus Bilirakis and Bill Posey and Democrat U.S. Rep. Darren Soto--as original cosponsors of the proposal. Since then, four Florida Republicans--U.S. Reps. Mario Diaz-Balart, Neal Dunn, Tom Rooney and Ted Yoho--have thrown their support to the bill as cosponsors.

Rubio announced that he would sponsor the bill in the Senate.

“Sharks play an important role in maintaining the health of the ocean ecosystems for which Florida is known for,” said Rubio. “Sharks are already sustainably and humanely harvested in federal waters per U.S. law, providing sustained economic benefits to coastal communities through fishing, trade, and tourism. This bill will help promote those same standards for sustainable and humane shark harvesting among our global trade partners as well. This bill protects international shark populations as well as the fishermen in Florida and throughout the U.S. who continue to fish by the rules.”

“While the practice of shark finning is already banned in U.S. waters, we do have a small population of fishermen who legally harvest whole sharks for their meat, oil, and other products,” said Murkowski. “This legislation sets a strong policy example for global nations that wish to prevent shark finning in their waters, while respecting the cultures of communities that rely on subsistence, protecting the rights of American fisherman that operate in the legal shark fisheries, and supporting the efforts of shark conservationists. Together, we can find solutions to protect our fisheries, our communities, and our marine ecosystems, worldwide.”

Webster welcomed the support of the senators.

“Fishing is a long-standing profession and treasured American pastime,” said Webster. “We must pursue conservation, while balancing the needs of the industry and recreation. This bill recognizes the sacrifices American fishermen have made to rebuild and sustain our shark populations. It encourages other nations wishing to export shark products to the United States to adhere to the same high standards for conservation and management.”

Webster’s office noted “the bill preserves U.S. commercial fishing jobs, a key component of our state and nation’s economy" and, taking a page from the World Trade Organization’s process for certifying importing shrimp, would have the U.S. Secretary of Commerce establish a three year certifying process for nations exporting shark products to the U.S.

Another Rubio story? It's

Permalink Submitted by RICHARD RIKER on May 1, 2018 - 11:47am
Another Rubio story? It's beginning to look like the Sunshine News is supporting this John McCain protegee. I don't know what party he should belong to but this RINO is no conservative Republican and certainly not a asset to the people he's suppose to be representing.

We appreciate your support

Permalink Submitted by Garden State Se... on May 1, 2018 - 10:39am
We appreciate your support and your commitment to conservation and US fishing families. Greg DiDomenico Executive Director Garden State Seafood Association

ANYONE prepared to "champion"