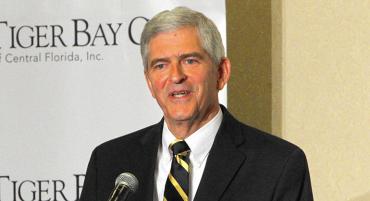 U.S. Rep. Dan Webster, R-Fla., is leading three other members of the Florida delegation in wanting the U.S. Commerce Department to increase regulation on the international shark trade.

Last week, Webster, who is the vice chairman on the U.S. House Water Power and Oceans Subcommittee, unveiled the “Sustainable Shark and Fisheries Trade Act” which modifies the High Seas Driftnet Fishing Moratorium Protection Act. The proposal has support from both sides of the aisle with three members of the Florida delegation--Republican U.S. Reps. Gus Bilirakis and Bill Posey and Democrat U.S. Rep. Darren Soto--cosponsoring the proposal.

Webster’s office noted “the bill preserves U.S. commercial fishing jobs, a key component of our state and nation’s economy" and, taking a page from the World Trade Organization’s process for certifying importing shrimp, would have the U.S. Secretary of Commerce establish a three year certifying process for nations exporting shark products to the U.S.

“Fishing is a long-standing profession and treasured American pastime,” Webster said when he brought out the bill last week.  “Our responsibility is to balance the needs of the industry with conservation. This bill recognizes the sacrifices American fishermen have made to rebuild and sustain our shark populations. It encourages other nations wishing to export shark products to the United States to adhere to the same high standards for conservation and management.”

The bill was sent to the U.S. House Natural Resources and the U.S. Ways and Means Committees. So far, there is no companion bill over in the U.S. Senate.

We are in full support of

Permalink Submitted by Greg DiDomenico on March 21, 2018 - 5:31pm
We are in full support of this legislation and thank all those who are working hard to achieve meaningful shark conservation while keeping US fishing families working. Thank you. Greg DiDomenico Executive Director Garden State Seafood Association