Backroom Briefing: Patronis Plays It Close to the Vest 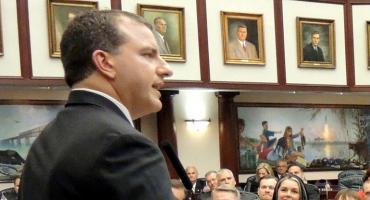 But with the postponement of a Cabinet meeting scheduled for Tuesday, Patronis’ public outing of what has put Breakspear’s job on the line will have to wait until a meeting in mid-June.

Gov. Rick Scott, Agriculture Commissioner Adam Putnam and Attorney General Pam Bondi have expressed, through spokespeople, that they will wait until the Cabinet meeting to discuss the future of Breakspear, commissioner of the state Office of Financial Regulation.

Patronis has been playing close to the vest what led him last week to announce a loss of confidence in Breakspear, who has been on the job since October 2011.

Patronis didn’t give a specific reason, broadly noting in a May 3 letter that from his personal experiences with the office and Breakspear there is a “lack of leadership at the top.”

Not included in statements May 3 from the chief financial officer and Office of Financial Regulation was a request from Breakspear to Patronis to meet that day or the next “as I would like to have the opportunity to discuss this with you?”

In a cordial reply the same day, Patronis rejected the face-to-face request.

“I do not want you to serve, deliberately or inadvertently, as a conduit with another member of the commission prior to the Cabinet meeting,” Patronis said in an email to Breakspear. “In order to ensure a transparent process conducted in the sunshine, I will discuss my concerns during your assessment review.”

This is not the first time Breakspear has faced the possibility of being let go by Scott and Cabinet members, who serve as the Florida Financial Services Commission.

In 2015, Scott went after Breakspear, along with a couple of other agency heads. But the effort was blocked by then-Chief Financial Officer Jeff Atwater as Cabinet members questioned the involvement of Scott’s office in the controversial exit of longtime Florida Department of Law Enforcement Commissioner Gerald Bailey.

VOTE FOR ME OR I’LL SUE

Progressive Tim Canova is still fuming about his 13-percentage point loss in a Democratic primary in 2016 to U.S. Rep. Debbie Wasserman Schultz and --- more so --- that the Broward County Supervisor of Elections office destroyed paper ballots from the contest.

Now, Canova is launching a new bid against Wasserman Schultz, this time without a party affiliation. The move allows the Bernie Sanders ally to take on the former Democratic National Committee chairwoman in November when all voters, not just party faithful, will decide.

Canova is also preparing to challenge the results. At least, if he doesn’t win.

“We are prepared to bring a lawsuit even if we lose the race by one vote or by 10,000,” Canova said Friday while in Tallahassee after qualifying to run for the office.

Canova, a Nova Southeastern University law professor, contends his field numbers in 2016 showed “a very good result for us,” but because of the margin of the results he didn’t file a challenge within a 10-day post-election window.

Since then, he’s read about foreign interference in the U.S. voting process and that electronic voting machines may not be as secure as officials claim. Then came an order last September by Broward County Supervisor of Elections Brenda Snipes to destroy boxes of vote-by-mail certificates and early-voting ballots --- after scanning and storing electronic copies of the ballots --- as Canova sued for access to paper ballots from the primary.

“We’ve lost confidence in the integrity of the election system in the Broward County in light of the ballot destruction,” Canova said. “I’ve got folks saying, you should challenge even if you win --- I don’t think we’ll challenge if we win. But considering what happened in the last race, I think we’d be foolish not to be prepared to challenge an election result that goes against us.”

TRUMP UP, YET STILL UPSIDE DOWN

President Donald Trump’s approval ratings among Florida voters are still upside down, according to a new survey from the Florida Atlantic University Business and Economics Polling Initiative.

Forty-five percent of registered voters polled in early May had a negative view of Trump, while 43 percent approved of the president.

The FAU pollsters said the approval rate was a high mark for Trump since they began polling after he took office. It represents a significant improvement since the president bottomed out with a 35 percent approval rating in June 2017.

But the kicker in the poll is that while Trump’s numbers are showing some improvement, more Florida voters would rather have Barack Obama as president. About 49 percent of the voters favored Obama, with 43 percent backing Trump.

The survey also showed that one of most significant accomplishments of Trump’s administration, a major tax cut, is not resonating with Florida voters. Only 29 percent told the FAU pollsters that the tax cut is helping them financially, while 19 percent said it has hurt them and 52 percent said it has made no difference.

DOCTORS IN THE GARDINER HOUSE

Former Senate President Andy Gardiner, R-Orlando, and his wife, Camille, will receive honorary doctorates this weekend from Beacon College during commencement exercises in Mount Dora for their work to help people with “unique abilities.”

The Gardiners have a son with Down syndrome, and the former Senate president “flexed his political muscle” --- according to the school --- to drive measures that create job options for people with unique abilities and that provide educational aid and higher-education opportunities through what is called the “Gardiner Scholarship Program” to families whose children have developmental disabilities.

Beacon is a private non-profit that markets itself as the first accredited institution of higher learning to award bachelor's degrees “primarily to students who learn differently.”

TWEET OF THE WEEK: “Really?! After all the attacks we endured while he used his position as a bully pulpit for his gubernatorial platform? Wawawa” --- Orlando Democratic Rep. Amy Mercado (@AmyMercado) as House Speaker Richard Corcoran, R-Land O’ Lakes announced Wednesday he would not run for governor.

Permalink Submitted by Floriduh on May 11, 2018 - 8:43am
more business as usual BS cronyism from Scott and his buddies...