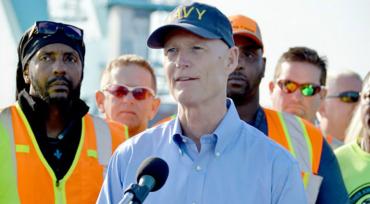 Friday marked the onset of the 2018 hurricane season, but the political squalls are already brewing throughout the Sunshine State, with the August primary and November general elections on the horizon.

At the top of the ticket, U.S. Sen. Bill Nelson and his challenger, Gov. Rick Scott, have been duking it out, with Scott taking a day off from storming the state to travel to Puerto Rico --- in his official capacity as governor --- as he continues to court Hispanic voters.

The Puerto Rican visit --- Scott’s sixth to the U.S. territory since Hurricane Maria devastated the island in September --- came two days after The New England Journal of Medicine published a Harvard study concluding that more than 4,600 people lost their lives in Puerto Rico due to the storm, magnitudes greater than the official death toll of 64.

Nelson took to social media to mock Scott’s visit to the hurricane-ravaged island, where some residents remain without power long after Maria left almost all of Puerto Rico in the dark.

“I don’t know what I would do differently,” Scott told reporters in Puerto Rico on Thursday.

“Rick Scott just said: "I don't know what I would do differently" in Puerto Rico. REALLY? Nine months after the hurricane and people still do not have electricity, water, and jobs! Rick Scott does not understand that people are hurting and in need,” Nelson tweeted.

But Senate candidates aren’t the only ones wooing Boricuas.

The day before Scott met with Puerto Rican government leaders on their turf, Democratic National Committee Chairman Tom Perez traveled to Central Florida to announce the state Democratic Party had received a $100,000 grant to “make sure that we are listening to Puerto Ricans and we are organizing in the Puerto Rican community.”

POLITICS OF POT, PART ONE

While Scott and Nelson seek the blessing of Puerto Rican voters, they’re far apart on what one political rainmaker predicts will be a critical issue for voters: whether Florida patients should be able to smoke medical marijuana.

Orlando lawyer John Morgan drew attention to the issue this week when he called on Scott to back down from an appeal of a judge’s order that said a state law banning smokable marijuana is unconstitutional.

The state Department of Health, an executive branch agency controlled by the governor, immediately appealed the ruling, a move that put Gievers’ order on hold. Gievers will have a hearing Monday morning on a request by the plaintiffs to lift the automatic stay.

Morgan, who largely bankrolled the 2016 constitutional amendment, warned Scott that the fight to keep patients from smoking pot could spark a “political wildfire” that will cost the Republican votes in his battle to unseat Nelson.

“This is a message today for Gov. Scott. I believe that your decision to allow this to go on could have serious, serious ramifications in your election against Bill Nelson,” Morgan, a major political fundraiser who supported Democratic presidential candidate Hillary Clinton in 2016, told reporters during a press conference Tuesday.

Asked to respond to Morgan’s demand that the governor drop the appeal, Scott’s communications staff directed a reporter to a statement issued last week by the health department after Gievers’ decision: “This ruling goes against what the Legislature outlined when they wrote and approved Florida’s law to implement the constitutional amendment that was approved by an overwhelmingly bipartisan majority. The department has appealed the ruling, and this imposes an automatic stay.”

Scott’s opposition to smoking pot “could really hurt him in his election for Senate,” Morgan told The News Service of Florida in a telephone interview.

“Pure and simple --- politics. I think he’ll lose the election over it,” said Morgan, who toyed with running for governor this year as a Democrat or as an independent before abandoning the idea.

When asked if Nelson supports allowing patients to smoke medical marijuana, a campaign spokeswoman said the senator "supports medical marijuana ordered by a physician, voted for the constitutional amendment and believes Floridians should have access to the medication recommended by their doctor."

The Democratic senator gave a more direct answer later in the week during a stop in St. Petersburg.

"Of course," Nelson said, when asked if he backs allowing patients to smoke pot. "That's what the constitutional amendment was."

The tangle over pot won’t just affect the top of the ticket, according to Morgan, who spent at least $7 million of his own money to help legalize medical marijuana.

Support for legalizing recreational marijuana is a make-or-break issue for the Democratic candidates vying to replace Scott in the governor’s mansion, Morgan said.

Former Congresswoman Gwen Graham, meanwhile, has endorsed a plan to decriminalize marijuana for personal use, saying she doesn’t believe people should be locked up for possessing small amounts of pot.

That won’t cut it, at least in Morgan’s view.

“A Democrat who doesn’t call for the full legalization of marijuana I do not believe can win the Democratic primary,” Morgan said in an interview.

Graham, who has been criticized by some Democrats for being too conservative during her two-year stint in Congress, is the only candidate to stop short of endorsing flat-out legalization. Some states, counties and cities have used decriminalization as a way to allow people to get citations for possessing small amounts of pot, removing the possibility that they will be arrested on criminal charges.

Graham included decriminalization of personal possession of marijuana in a criminal-justice reform package released Thursday. She also wants to reduce sentences for nonviolent drug possession and called for a review of all mandatory-minimum sentencing laws.

“Florida should embrace the principle that no young person should go to jail or have their lives ruined over an incident of marijuana use --- we can and should decriminalize," she said in a statement last year.

But Morgan said the only way “people won’t be arrested, detained, ticketed or stopped” is the full legalization of marijuana.

“Gwen is playing a general election game assuming that she’s going to be the nominee, and that is the most dangerous game a politician can play, because it reeks of arrogance and it assumes that the Democratic Party is going to give her a pass on an issue they’re passionate about,” he said. “I would never vote for her in a million years with that position. And I think I speak for almost 100 percent of the Democratic Party. It’s an outrage.”

STORY OF THE WEEK: The battle over whether patients should be allowed to smoke medical marijuana continued to flare, after plaintiffs in the case asked a Tallahassee judge to lift an automatic stay sparked by an appeal by the Department of Health. Leon County Circuit Judge Karen Gievers, who ruled on May 25 that a state law banning smokable medical marijuana is unconstitutional, will hold a hearing Monday on lifting the stay.

QUOTE OF THE WEEK: “I really don’t want my visits or anyone’s visits to be taken. … Why would you even take them away? I mean, they’re already having a bad enough time in prison. Why would you make it worse? Please. I need to see my dad on the weekends.” --- Eleven-year-old Cody Calhoun, pleading with prison officials to abandon a proposed rule that could cut inmate visitation in half.

How can Scott travel on the

Permalink Submitted by how the hell on June 4, 2018 - 11:02am
How can Scott travel on the tax payer dime pandering for votes, all while still under the guise of being Governor? only in Floriduh... How can alcohol be legal and marijuana not? The age old repub double standard...

Permalink Submitted by RGB on June 4, 2018 - 8:42am
Issue: Pot - Legalize it and take advantage of the tax benefits to address infrastructure projects......One at a time! This will add jobs to the economy and address identified needs. Don't put the money to bottomless pits of any sorts infrastructure or social. Issue: Puerto Rico - The $100,000 the dems have granted the state is to sway voters to the dems side. It does nothing to address issues in Puerto Rico. Both Scott and Nelson have made trips to the island and neither of them have any constructive recommendations to make that would help the island or the image of the problem. They are making it a POLITICAL ISSUE. Keep your Darn noses out of the business of Puerto Rico and get your noses back to the issues of this state!

Permalink Submitted by Dean Franklin on June 2, 2018 - 9:53am
Scott and Bondi need to quit using our tax dollars to fight against Medical Cannabis. They are violating the state Constitution. Scott's handpicked blivet Bax needs to quit violating state law and the Constitution by dragging out the program. He's in clear violation of the law and should be removed. None of them should ever be allowed to have anything to do with any government position. How can we trust them to obey the law and protect the Constitution ever again

If it's slippery and slithers

Permalink Submitted by Ocean Joe on June 2, 2018 - 8:22am
If it's slippery and slithers to Puerto Rico to pander for votes and then to Texas to beg for oil money, it's Ricky.