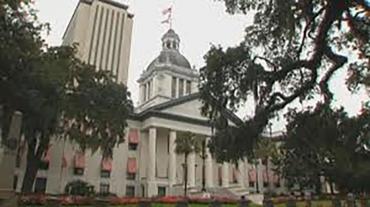 That was the drama that dominated Washington, D.C. this week as Democrats backed impeachment proceedings against President Donald Trump.

But in the nation’s largest swing state, Florida Republicans’ support of the president remained unwavering, with some GOP officials using the unfolding events to raise money.

Gov. Ron DeSantis, whose 2018 election can be greatly attributed to an endorsement from Trump, was among the Republicans who sent out blast fundraising emails, asking supporters to contribute money to help defend the president.

On the day the governor sent the email on behalf of the Republican Party of Florida, he also told reporters the impeachment proceedings were a “charade” and wished Democrats would “focus on issues that really matter.”

Scott said the impeachment proceedings are Democrats’ “entire legislative agenda” and that Democrats can’t “get over” the fact they lost to Trump in 2016.

Meanwhile, Rubio tweeted Friday morning that he intends to “avoid hysteria, red herrings & straw men” and will “learn the facts before forming opinions.”

After a special master recommended the Florida Senate reinstate suspended Broward County Sheriff Scott Israel, DeSantis said he hopes senators will hold Israel accountable for his “incompetence” and that the issue is a “very, very clear choice.”

The recommendation by Special Master Dudley Goodlette was a stunning blow to the governor, whose decision to suspend Israel was one of his first acts after taking office in January.

But Goodlette, a former Republican lawmaker appointed special master by Senate President Bill Galvano, R-Bradenton, found the governor failed to prove allegations of neglect of duty and incompetence connected to the school massacre and another mass shooting at Fort Lauderdale-Hollywood International Airport..

“Overall, the evidence presented to me suggests it was individual failures that plagued the Stoneman Douglas response, not neglect or incompetence by Sheriff Israel,” Goodlette wrote in a 34-page report.

The Senate has the authority to remove or reinstate Israel, who was elected to the post in Broward County. Galvano ordered a special session of the Senate to be held from Oct. 21 to Oct. 25 to decide the suspended sheriff’s fate..

In one of his earliest --- and most far-reaching --- actions as the state’s chief executive, DeSantis reshaped the Florida Supreme Court, with the appointment of three justices who have cemented a decidedly conservative majority.

And now, DeSantis has delivered the same brand of conservative jurisprudence to an administrative court system that has been a go-to place for citizens and businesses to redress grievances against state agencies.

MacIver is head of the local chapter of The Federalist Society, a prominent conservative legal organization in Florida and nationally.

Before he was chosen by DeSantis and the Republican Cabinet members, MacIver said his goal was to hire administrative law judges “who have the correct judicial philosophy.” Agriculture Commissioner Nikki Fried, a Democrat, was the lone Cabinet holdout on the appointment, saying MacIver lacks experience to hold the post.

In his new role, MacIver will have the ability to hire and fire administrative law judges and assign cases. The division handles cases ranging from big-money fights involving gambling operators and medical-marijuana companies to a dispute about bakers who refused to make a pastry with an anti-gay slogan.

TROUBLE IN THE TRANSPORTATION WORLD

A former executive director of a state transportation commission has filed a lawsuit alleging she was forced to resign in retaliation for exposing a $5.5 billion budget “irregularity” proposed by the Florida Department of Transportation.

Pitts resigned as executive director of the commission in January after working for the state for nearly 30 years, starting as a mail clerk at the Department of Transportation and later holding staff positions in the Legislature.

While working for the commission, Pitts “identified and reported defendants’ violations of one or more law (sic), rules, regulations and/or malfeasance, misfeasance, and/or gross misconduct, and thereafter was subject to retaliation by defendants,” the lawsuit, filed by Tallahassee attorney Marie Mattox, alleges.

The lawsuit accuses commission members Ronald Howse and Jay Trumbull, as well as former Department of Transportation Secretary Mike Dew and his chief of staff, Shannan Schuessler, of retaliating against Pitts and accuses Howse of sexual harassment.

QUOTE OF THE WEEK: “Looks like the governor’s mansion will have to stay baby-proofed for a little while longer.” --- Gov. Ron DeSantis on announcing First Lady Casey DeSantis is pregnant with their third child.

Permalink Submitted by Thelma Pickard on September 30, 2019 - 1:29pm
Seriously, democRATs can impeach President Trump and then immediately impeach him again and then repeat and repeat for his entire eight years as president. Big deal...

Permalink Submitted by VoteDem2020 on September 30, 2019 - 11:18am
GOPs "heart"Trump - Dems hate Trump. The election of 2020 will be a referendum on whether this country is mostly deplorable or mostly normal. It'll be up to the Independents.

If only democRATs were normal

Permalink Submitted by Anonymous on September 30, 2019 - 1:31pm
If only democRATs were normal, but they're not.

I hope they all go down with

President Trump is doing an

Permalink Submitted by Lora Harber on September 30, 2019 - 10:31am
President Trump is doing an excellent job for the American people - keeping unemployment low and the economy buzzing. Great job!

Permalink Submitted by VoteDem2020 on September 30, 2019 - 11:20am
The racism, draft-dodging, lying, cheating and adultery, childish name-calling and petulent p*ss*ness don't bother you??? Are you really paying attention?

Let's all back the most

Permalink Submitted by Jerry on September 28, 2019 - 8:39am
Let's all back the most fiscally and morally bankrupt president ever!!s……….He sold us out to the Russians, the Saudis and took a great economy and saddled it with $3T more debt but with worse GDP, immigration, other numbers than Obama...…Ran off our customers with Tariffs while getting nothing in return….....Once tariffs come off the customers already have new suppliers...…...Now he wants Ukraine to make up dirt in Biden to get military aid when it has been obvious to everyone as it had already been looked into, there was nothing there but Trump's obsession …………..The really sad thing is Biden would have never won the nomination anyway so the whole effort is moot except Trump, others with him broke many laws....….;^0...............Those that enabled Trump will find out everything, everyone he touches turns to cra-............Has all his life screwed everyone, was the largest bankruptcy ever for a person, and you expected differently?...............Now he screws the repub party as he takes it down with him............Can't say you were not warned.

Trump is a two-bit mafia boss

Permalink Submitted by VoteDem2020 on September 30, 2019 - 11:22am
Trump is a two-bit mafia boss wannabe. And, he's as demented and as perverted as most of that group is.

I guess you get paid by the

Permalink Submitted by Charlotte Greenbarg on September 28, 2019 - 8:52am
I guess you get paid by the word for trolling for the far left Democrats and their Antifa thugs.

I know you are an idiot or

Permalink Submitted by Jerry on September 28, 2019 - 3:02pm
I know you are an idiot or Russian bot from your post. ………That you think I'm far left only shows you to be so far right you can't even see the middle……….I'm a fiscal conservative and progressive what all real conservatives should be is obvious from my posts...………......The problem is why repubs are no longer fiscally or morally conservative but fiscally and morally bankrupt?...…….What happened to your party?

The DemocRAT party has

You obviously have NO CLUE as

Permalink Submitted by VoteDem2020 on September 30, 2019 - 11:24am
You obviously have NO CLUE as to the actual definition of "fascism". Look it up. You might learn something ... and see that Donito Trumpolini and his cult fit the bill to a 'T'.

Not all democrats are

Permalink Submitted by Anonymous on September 30, 2019 - 4:25pm
Not all democrats are fascists, but all fascists are democrats.

I guess the Florida heat,

Permalink Submitted by BobH on September 28, 2019 - 8:09am
I guess the Florida heat, does have an affect on intelligence.

Apparently, it's the climate

Permalink Submitted by Anonymous on September 30, 2019 - 11:25am
Apparently, it's the climate change effect all around, not just in Florida!