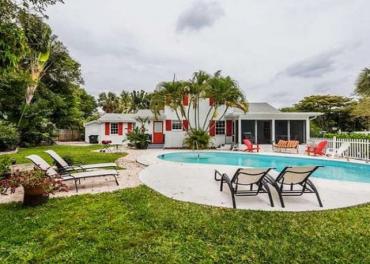 But since rescinding that policy -- and receiving a nod of appreciation from DeSantis in Jerusalem in May -- Airbnb has been on a winning streak in the Sunshine State, especially in court.

Circuit Judge Edward Nicholas of Florida’s 12th Judicial Circuit Court last week dismissed a lawsuit by Manatee County Tax Collector Ken Burton, who wanted to make Airbnb responsible for tax money potentially not being paid to the county by vacation rental homeowners who rent out their properties through their sites.

Nicholas ruled since home-sharing digital platforms, such as Airbnb, HomeAway and MisterB&B, do not actually own the properties that owners rent on their sites, they should not be responsible for paying state and local sales and lodging taxes.

Airbnb “does not exercise the taxable rental privilege any more than a credit card company or other payment processor would, and its receipt of the vacationer’s payment does not amount to the collection of rent, but rather to compensate them for their online services,” Nicholas wrote. “Ultimately, it is the property owner who collects the rent and is therefore obligated to remit the” tourist development tax.

In a 2015 agreement with the state’s Department of Revenue, Airbnb arranges to collect taxes voluntarily in pacts with individual counties. It has such agreements with 41 of Florida’s 67 counties.

Airbnb does not have a tax-collection agreement with Manatee County, where Burton argued it was acting like a “dealer” and should register as one and remit taxes accordingly.

Nicholas said the “dealer” argument was “well-pled” but better pled before the Florida Legislature than in a court.

“It is the Legislature that is obligated to make that determination, not the courts,” Nicholas wrote. “Said another way, if the defendant here, as a provider of support services to property owners who choose to rent their homes and who pass the funds along to said homeowner, is a ‘dealer’ for purposes of the statute, the Legislature, in this court’s opinion, will have to make that call.”

“We are pleased that Judge Nicholas granted our Motion for Dismissal based on the ruling in Palm Beach County earlier this year on the same topic and we remain willing to work with Manatee County on an agreement to voluntarily collect bed taxes on behalf of our hosts, as we do for 41 counties across Florida, including Hillsborough and Sarasota,” Airbnb said in a statement.

In July, Airbnb said it collected $89.5 million in state and local tax remissions to local governments in 2018 through its voluntary agreements, while paying $810 million in vacation rental home income for 45,000 Florida host properties visited by approximately 4.5 million guests.

In April, State Administrative Judge Robert Telfer III ruled the Asian American Hotel Owners Association (AAHOA) failed to show its members had been harmed by the Airbnb’s 2015 deal with the Florida Division of Revenue.

The AAHOA and 1,100 members had petitioned for an administrative hearing in February to vet their claim that the 2015 agreement, updated in 2018, was negotiated in secret without sufficient accountability and should be voided.

Meanwhile, on Oct. 7, 11th Circuit Court Judge Michael Hanzman struck down Miami Beach's 2016 short-term rental ordinances, including its ban on short-term home-sharing and fines that exceed limits set in state law, such as $1,000 per day fines for the first code infraction and $5K per day for repeat code violations.

Airbnb had challenged the city of Miami Beach’s 2016 ordinances that featured some of the nation’s stiffest penalties against home-sharing, with short-term rental fines between $500 and $1,500 for multifamily and single-family homes, up to $20,000 with each subsequent violation to increase by $20,000.

The city will appeal, Mayor Dan Gelber said in a statement.

John Haughey is the Florida contributor to The Center Square.

Permalink Submitted by rolem on March 29, 2020 - 12:39am
[ USA PEOPLE COME HERE ONLY ] For dads and moms who prefer to stay home to take care of their family, or rest of individuals hoping to find a way to earn some extra income in their free time on a regular basis here is a remarkable thing to explore...Thanks A lot Find out more here>> w­­w­­w­­.­­Bonanzu.comℬ The Word " ℬ " is not with web address.

Permalink Submitted by Anonymous on March 27, 2020 - 4:34am
[ USA ONLY ] Getting paid every month easily more than $15k just by doing simple job online. Last month i have exactly received $16839 from this online job just by giving this 2 hrs a day online. Now everybody on this earth can get this job and start earning more cash online just by follow instructions here........for more info visit any tab this site Thanks a lot Copy Here.........>> ↓↓↓↓ ↓↓↓↓ www.Wikitrender.com

Permalink Submitted by rolem on March 27, 2020 - 2:08am
[ USA PEOPLE COME HERE ONLY ] ●Earning money online is very easy nowdays. Eanrs every month online more than $17k by doing very easy home based job in part time. Last month i have made $19754 from this job just in my spare time which is only 2 hrs a day. Very easy work to do and earning from this are awesome. Everybody can get this right now and start earning cash online by follow instructions on this webpage............. Thanks A lot GOOD LUCK ↓↓↓↓ COPY THIS SITE ↓↓↓↓ ↠↠↠ w­­w­­w­­.­­Bonanzu.com℠ The Word "(℠)" is not with web address.

Permalink Submitted by MariaWhittemore on March 26, 2020 - 9:10am
I am now getting paid $15k or more by just doing easy job online. I am now a good online earner and doing this job 2 hrs daily online and last month i have made $18596 from this online job. This online job is just amazing and its earnings are much better than other 9 to 5 office jobs. Every person can now get this job and start earning right now by follow details on this website.......www.Neway9.com

Permalink Submitted by garibi on March 19, 2020 - 7:11am
I get over $15k a month working part time. I kept hearing other people tell me how much money they can make online so I decided to look into it. Well, it was all true and has totally changed my life... Go Here............ WikiTrender.com

Permalink Submitted by jokhaa on February 23, 2020 - 1:34am
Start your home business right now. Spend more time with your family and earn.Start bringing 55$/hour just on a computer. Very easy way to make your life happy and earning continuously.         Ⓡwww.richfly2.ℂℴℳⓇ please don't copy"Ⓡ" In Url Thanks

Our product are Highly

This is good news for the

Permalink Submitted by Barbara Davis on November 1, 2019 - 6:13pm
This is good news for the little guy that needs to bring in some extra cash.