Unemployment Remains at 3.9 Percent in Florida 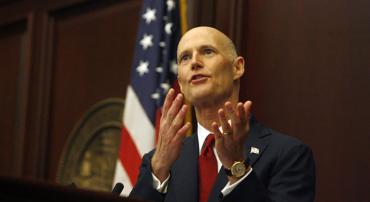 The unemployment rate in Florida stayed at 3.9 percent in March, right below the national average of 4.1 percent, as 13,800 new jobs--12,500 of them in the private sector--were added in the Sunshine State.

Gov. Rick Scott announced the news at VOXX International which moved a facility to Orlando in 2015.

“When I took office, I made it my number one mission to make Florida the best place in the world for job creation,” Scott said. I’m proud to announce today that Florida has achieved another incredible milestone – 1.5 million private-sector jobs have been created since December 2010. This incredible turnaround should serve as a blueprint for the rest of the country. If you cut taxes, eliminate burdensome regulation and invest in the priorities that matter most to families, like education, job creators respond by growing and creating jobs. Congratulations to every business who has chosen Florida as the best place to create jobs.”

In the past year, more than 173,000 jobs have been created in Florida with  professional and business services leading the way with 38,100 new jobs, The leisure and hospitality sector has seen 32,300 news jobs while there have been 31,600 jobs created in construction, 21,200 in financial activities, 15,600 in financial activities, 15,200 in  trade, transportation, and utilities and 10,000 in manufacturing. The information sector is the only field losing jobs with a drop of 1,700 jobs over the past year.

Cissy Proctor, the executive Director of the Florida Department of Economic Opportunity, pointed to job growth since Scott took over in Tallahassee.

“Since December 2010, businesses have created more than 1.5 million jobs for Floridians and their families,” she said. “This tremendous growth demonstrates Florida businesses’ confidence in our economy and our talented workforce.”

Okaloosa and St. Johns Counties had the lowest unemployment rate with both counties having 3 percent unemployment followed by Monroe County at 3.1 percent and Franklin, Orange, Seminole, and Walton counties which all stood at 3.2 percent.

Sumter County had the highest unemployment rate at 5.4 percent followed by Citrus County at 5.2 percent and Hendry County at 5.1 percent.

If you care about your state

Permalink Submitted by Lynn Siebert on April 21, 2018 - 8:36am
If you care about your state and your country, vote Republican in November. It is a no brainer this go-around. Get out and VOTE to keep our country's economic momentum moving in a positive direction. We are already seeing more tax money going into government which means more money available for social programs that you may want to support.

FLORIDA STAY UNIQUE, AND DO

Permalink Submitted by ORC on April 20, 2018 - 11:46am
FLORIDA STAY UNIQUE, AND DO NOT FOLLOW THE STUPIDITY OF SOME PLACES LIKE NEW YORK, CALIFORNIA, AND I CAN NAME A MANY OTHERS TOO!!! EACH PERSON BE THE BEST FOR HIMSELF AND HERSELF, AND EACH PERSON WANTING TO BE THE BEST, CAN ONLY MEAN FLORIDA SHALL HAVE A BETTER QUALITY OF LIFE, AND FLORIDA RANKING AND TAKING THE LEAD. IF EVERYONE IN FLORIDA WOULD HAVE AN EXTREME DESIRE TO FOLLOW THE TEN COMMANDMENTS THEN FLORIDA CAN NEVER LOOSE, IMAGINE FOR THE REST OF THE PLANET. LET NOT GREED BE INCORPORATED IN COMPETITION, BUT THE AMBITION TO BE THE BEST FOR ONE'S SELF, WHICH RESULTS IN THE CONSIDERATION FOR OTHERS. EVEN IF A PERSON IS A TRASH COLLECTOR IN FLORIDA, THEY CAN BE JUST AS PROUD OF WHAT THEY DO, AS ANYONE WITH A PhD, AND BE AND ARE JUST AS MEANINGFUL. IT IS UP TO US TO PROTECT AND CARE FOR THE HOME OUR HEAVENLY FATHER YAHVEH HAS GIVEN TO US, LET FLORIDA BE THAT EXAMPLE.