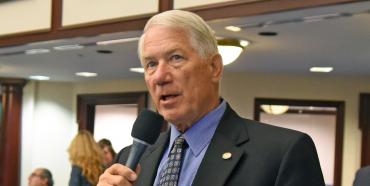 Hahnfeldt was first elected to the Florida House of Representatives in 2016 after a lengthy career in the U.S. Navy, where he served for 32 years as a nuclear submarine commander of the Pacific Fleet's Strategic Submarine Squadron.

Before entering Tallahassee politics, Hahnfeldt was involved in local politics and was elected to the Sumter County Commission in 2012.

The cause of death is currently unknown, but Hahnfeldt’s fellow legislators mourned the loss of their friend and colleague on Monday.

“The entire Florida House mourns the loss of our colleague and friend, Representative Don Hahnfeldt,” Corcoran wrote. “We honor and remember his service to our Country and our State. Please pray for his family in this difficult time.”

Legislators recalled a stellar lawmaker and an even better friend in the political process.

“His life was impressive,” said Rep. Joe Gruters, R-Sarasota, who roomed with Hahnfeldt in Tallahassee. “He was committed to always doing the right thing for his community and for Florida...this guy was a real superstar.”

“My wife Ann and I are saddened by the news of Representative Don Hahnfeldt’s passing,” Scott said. “Our thoughts and prayers are with his family during this difficult time.”

Hahnfeldt represented House District 33, which covers parts of Central Florida including portions of Inverness and The Villages. He made headlines recently when he filed legislation to raise the legal buying age for tobacco from 18 to 21.

“Our whole Florida House family is saddened by the passing of our colleague Rep. Don Hahnfeldt,” said Rep. Chris Sprowls, R-Palm Harbor. “Our hearts go out to his wife, his children and his grandchildren..as well as all their friends and neighbors.”

Other state representatives said they were “heartbroken” over the news, which spread through the political airwaves Christmas Day.

“He was such an incredible man who was loved by so many,” said Rep. Amber Mariano, R-Hudson.

Rest in peace Commodore. I

Permalink Submitted by Conrad Donahue on January 4, 2018 - 7:02pm
Rest in peace Commodore. I will always remember you for the outstanding leadership that you provided to me and my fellow SSBN Commanding Officers while serving as Commander Submarine Squadron 11. I enjoyed hosting you aboard my ship and was honored to have you as the host for my change of command. Was surprised to see you showing off your putting skills for a The Villages advertisement a few years ago. Many condolences to your family.

Permalink Submitted by Mark Bradford on December 31, 2017 - 4:47pm
Commander Hahnfeldt was my Weapons Officer while we served on the USS Hammerhead SSN 663 during the Cold War. He was fair, he was great in tactics and a great submarine sailor. We always felt secure and in good hands when Commander Hahnfeldt had the Deck. I never respected an officer more he was the real deal and II will miss him.

Sorry to hear of his passing,

Permalink Submitted by Harry Heyman Kolbert on December 27, 2017 - 9:14pm
Sorry to hear of his passing, he was a fraternity brother, Sigma Chi, University of Pittsburgh, he was an accomplished man.

Sorry to hear of his passing,

Permalink Submitted by Harry Heyman Kolbert on December 27, 2017 - 9:13pm
Sorry to hear of his passing, he was a fraternity brother, Sigma Chi, University of Pittsburgh, he was an accomplished man.