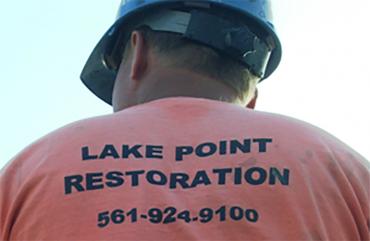 The South Florida Water Management District -- caught up in a legal tangle that involved 2012 Martin County commissioners and Martin environmental activist Maggy Hurchalla who advised them -- approved a settlement Wednesday with the owners of the Lake Point Restoration project in western Martin County.

"This settlement gets a solid environmental project back on track," said SFWMD Governing Board Chairman Dan O'Keefe.

It means the SFWMD will receive full ownership of the mined property and will be able to build a storage project that could hold 3,000 to 4,000 acre-feet of Lake Okeechobee water that otherwise would be bound for the St. Lucie Estuary.

According to the District's press statement, the settlement also allows SFWMD to buy needed rock for infrastructure maintenance purposes at a fair market price.

The Lake Point Restoration project is a public-private partnership approved by both the SFWMD in 2008 and Martin County in 2009 on land initially slated for residential development.

Lake Point Ranches was approved as 20-acre lots for an equestrian residential development on the Port Mayaca property off State Road 76 near Lake Okeechobee in 2007, but the equestrian community was never built.

Jud Laird, Harry Rusbridge, George Lindemann, Jr. and George Lindemann, Sr. bought the property in 2008 for more than $50 million, then converted the project to a rock mining operation under a land acquisition and development agreement with SFWMD, which entered into a separate agreement with Martin County to allow the rockpit to operate with mining permits issued by state and federal agencies.

The Lake Point venture was set up so that the 2,200-acre property would be donated to the District for environmental and water management purposes.

A 150-acre recreation area was to be given to Martin County. Storm water treatment areas were to be created from excavated areas to divert water from the C-44, clean it of phosphorous and send it back to the C-44 as clean water. Lake Point and the District said the project was a critical part of Everglades restoration efforts.

Lake Point attempted to generate additional revenue by conveying water from ​the C-44 through its property to the City of West Palm Beach and other municipalities south of Martin County for sale to utility customers. There never were any takers.

Lake Point and SFWMD had entered into negotiations to add the water supply ​​component to their plans for environmental restoration, connecting the C-44 at the north end of the Lake Point property to the L-8 canal to the south.

Owners of the rock mine claim Hurchalla lied about their project to county commissioners. And because of her reputation as an authority on environmental matters in the area, the commission changed from unanimously supporting the project in 2008 to taking steps to shut down the operation in ​2013, in part by denying Lake Point's request to revoke the housing development order per their agreement. ​In legal terms, those actions are called “tortious interference” with existing contracts.

When Martin County commissioners asked Growth Management Director Nicki van Vonno to investigate whether wetlands were being destroyed on the Lake Point project, as Hurchalla claimed, she answered "No. The area (being referred to by Hurchalla) is a cornfield.” In addition, no wetlands anywhere on the property had been destroyed, van Vonno continued, and in fact, several wetlands had been fully restored.

Lake Point asked Hurchalla to correct her misstatements about their project, and she refused. The lawsuit against the District and Martin County was filed in February 2013, claiming both failed to keep promises made in the agreements.

In the middle of all this, Lake Point filed a higher-profile lawsuit against Martin County commissioners alleging public records violations. The second time, the case went to arbitration. Ultimately, three commissioners -- Sarah Heard, Ed Fielding and Anne Scott -- were caught in a web of lies, denying they conducted public business on private email accounts, hiding, allegedly even attempting to destroy records to which the public is entitled.

In his February 2017 order, mediator Howard Googe found that “... a pattern and practice of non-compliance and lack of diligence by the county and certain county commissioners in preserving and protecting public records … ” as required by the state's public records law, entitled Lake Point to attorney fees and costs -- excluding those associated with Lake Point's appeal -- thus awarding Lake Point its fees as of Dec. 31, 2016, in the amount of $371,801.75.

He said the settlement could lead to another one: between Lake Point and Martin County.

Accardo told the newspaper the SFWMD settlement "'creates a path where the county can own this land. Under the original agreement, the land ownership would come into the hands of the district. Under this settlement, it's basically an opportunity for the county to take over this land if the county will accept it as part of a settlement with Lake Point.'"

Hurchalla, who would have had to pay $​1,111.11 a day to participate in the mediation, has opted against settlement and will take her chances in court. She is represented by attorney Virginia Sherlock.

Reach Nancy Smith at nsmith@sunshinestatenews.com or at 228-282-2423. Twitter: @NancyLBSmith. Barbara Clowdus, editor and publisher of Martin County Currents, contributed to this story.

Venezuela is a 'Humanitarian and Political Crisis'

Maggy, Sarah, Ed and Anne are

Permalink Submitted by Ted Guy on August 24, 2017 - 5:01pm
Maggy, Sarah, Ed and Anne are on the wrong side of this ridiculous dispute! What could they have been thinking?

Permalink Submitted by Jose Quinon on August 24, 2017 - 2:20pm
Martin County Commissioners - you guys need a talented lawyer capable of getting you off the hook for such stupid dealings. Keep you mouth shut and call me. Look me up - i have gotten many corrupt officials clear on technicalities. Doesn't matter if you are straight out guilty. The law is there to use in your favor. Next time, leave the soppy left wing enviro-wacko's to their own devices. Soros and the rest of the cabal can take care of themselves. This is about your money. be clear, be focused. Forget the feel good stuff for Chris' sake. So call me Martin Commissioners - the way this reads - you need a good lawyer badly. Again - doesn't matter what you did - it matters only if you win. Jose