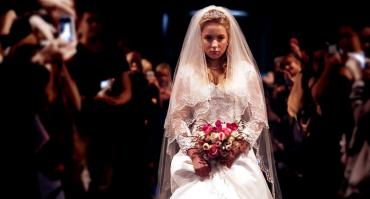 Believe it or not, child marriage is technically still legal in Florida -- but a new bill weaving its way through the Florida Legislature this session would increase the age requirement to get married in the Sunshine State, effectively ending child marriages altogether.

Florida law currently allows people as young as 16 to get married, but a new measure, SB 140, would prohibit anyone under the age of 18 from tying the knot.

If passed, Floridians hoping to wed would be required to provide their Social Security numbers to the county or circuit court who would then verify whether the parties were of legal age.

An amendment to the measure would whack violators of the bill with a misdemeanor if they issued marriage licenses to underage children.

Benacquisto pointed to the case of Sherry Johnson, an 11 year-old from Tampa who was married by a Pinellas County Clerk to a 20 year-old member of her church who raped and impregnated her.

As child welfare authorities investigated, church officials decided the best way to “clean up” the controversy and decided Johnson and her rapist should get married.

Officials in Pinellas County were aware of Johnson’s age at the time and issued the license anyway.

Johnson told the committee she “couldn’t get out” of the marriage with her abuser, with whom she had six children.

The U.S. Department of Health considers a marriage under the age of 18 a “human rights abuse,” though child marriages still happen nationwide.

Over 1,800 marriage licenses were issued to minors in Florida from 2012 to 2016, a statistic supporters of the measure said was a surprise.

“It’s really shocking to us that child marriage Is still legal in all 50 U.S. states at this moment,” said Heather Barr, senior researcher on women’s rights with Human Rights Watch.

A reflective Johnson told the Rules Committee it was now up to them to change thousands of children’s lives in Florida.

“It takes a village to raise a child,” Johnson said. “We are that village.”

The bill passed unanimously and with three committee stops out of the way now heads to the Senate floor.

Supporters of the measure said they were glad the archaic practice was finally close to coming to an end in Florida.

“I worked in the legislature for a decade, and have worked in the process for 23 years, and like many others was unaware of the problem of child marriage in Florida,” said Gus Corbella, a lobbyist who works with women's advocacy group Tahiri Justice Center. “We’ve worked hard this session to bring this practice to an end, and are very close to doing so.”

The Senate Rules Committee unanimously passed the measure Thursday by a vote of 11-0.

Permalink Submitted by The Trapper on January 12, 2018 - 11:22am
Heather Barr. Senior researcher for womens rights. Works for Human Rights Watch. Heather might be a great old gal. (She IS described as "senior") But suspect she and the whole organization could go POOF and disappear, never to be heard of again. And no one and nothing would miss a beat.

If you can quit school at 16

Permalink Submitted by The Trapper on January 12, 2018 - 11:12am
If you can quit school at 16 why can't you get married at 16? Prolly already knocked up, might even know who baby daddy is. We have bigger problems for the pondscum sucking politicians to waste their time and our money on. Heck, lets talk bout miscegenation. So we have two married polticians. She is caucasion, he is negroid. Both married. All piled up in a wad like a couple fishworms. (I stole that from "Spencers Mountain" so we spend Christ knows how much money sending them on a fact finding mission to....drumroll.......Boston.