Gov. Rick Scott announced today that the Florida Department of Health (DOH) has identified 10 additional people in Florida with the Zika virus who likely contracted it through a mosquito bite.

This brings the total number of people with locally transmitted Zika to 14. DOH believes that active transmissions of the Zika virus are still only occurring in the one small area in Miami-Dade County, just north of downtown, that was announced on Friday (see map below).

This remains the only area of the state where DOH has confirmed there are ongoing local transmissions of Zika. Among the 10 new individuals announced today, six are asymptomatic and were identified from the door-to-door community survey that DOH is conducting.

Following today’s announcement in St. Petersburg, Scott called upon the Centers for Disease Control and Prevention (CDC) to activate a CDC Emergency Response Team (CERT) to assist the Florida Department of Health and other partners in their investigation, sample collection, and mosquito control efforts.

Said the governor in a written release, “Following today’s announcement, I have requested that the CDC activate their Emergency Response Team to assist DOH in their investigation, research and sample collection efforts. Their team will consist of public health experts whose role is to augment our response efforts to confirmed local transmissions of the Zika virus.

“While we continue to learn more about this virus each day, we know that it is most harmful to pregnant women and their babies. For women who live or work in the impacted area and are either pregnant or thinking of becoming pregnant, I urge you to contact your OB/GYN for guidance and to receive a Zika prevention kit.

“Florida has a proven track record of success when it comes to managing similar mosquito-borne viruses. We will continue to keep our residents and visitors safe utilizing constant surveillance and aggressive strategies, such as increased mosquito spraying, that have allowed our state to fight similar viruses. While I encourage all residents and visitors to continue to use precaution by draining standing water and wearing bug spray, Florida remains safe and open for business. This year, we have already welcomed a record 30 million tourists and we look forward to welcoming more visitors to Florida this summer.”

DOH has conducted testing for the Zika virus for more than 2,300 people statewide. Since DOH began its investigation into possible local transmissions of Zika on July 7, more than 200 individuals in Miami-Dade and Broward counties have been tested for the virus who live or work near the individuals that have already been confirmed with likely mosquito-borne transmissions. Of the 14 individuals identified, two are women and 12 are men.

The CDC has now issued a notice to women who are pregnant or thinking of becoming pregnant to avoid unnecessary travel to the impacted area that is just north of downtown Miami (see map below of the one square mile area). As directed by Governor Scott last week, DOH has activated the Joint Information Center (JIC) within the State Emergency Operations Center to ensure the impacted area has coordinated access to information and resources. DOH has also begun the process to contract with commercial pest control companies to enhance and expand mosquito mitigation and abatement, including increased spraying, in the impacted area.

On Feb. 12 Scott directed the state surgeon general to activate a Zika virus information hotline for current Florida residents and visitors, as well as anyone planning on traveling to Florida in the near future. The hotline number is 1-855-622-6735.

The exact location of where DOH believes there are active transmissions of the Zika virus is within the boundaries of the following area: NW 5th Avenue to the west, US 1 to the east, NW/NE 38th Street to the north and NW/NE 20th Street to the south. This area is about one square mile and a map is below to detail the area. 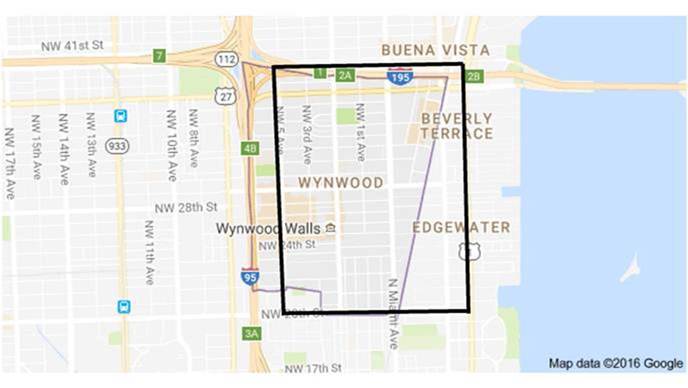