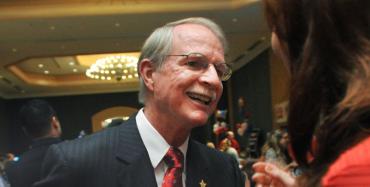 Freshman U.S. Rep. John Rutherford, R-Fla., announced this week that he would run for a second term meaning the First Coast congressman should continue to be a major player on homeland security issues.

Rutherford told Florida Politics this week that he was planning to run for another term.

“It is a tremendous honor to serve my fellow Northeast Floridians in Congress,” Rutherford said. “I am proud of all our hard work over the last year fighting for jobs, veterans, a renewed military, and secure borders.”

“But a great deal of work remains ahead and I look forward to seeking re-election to continue this work on behalf of the fine people I am so humbled to serve,” Rutherford added.

Currently representing a secure Republican district, Rutherford should continue to remain a factor when it comes to homeland security. Despite having just wrapped up his first year in Congress, Rutherford has proven to be a factor on the U.S. House Homeland Security Committee.

Rutherford had U.S. Rep. Michael McCaul, R-Texas, the chairman of the House Homeland Security Committee, as a co-sponsor of the bill and they have often worked together during the First Coast Republican’s first year in Congress. They teamed up back in March to unveil the “Reducing Department of Homeland Security Acquisition Cost Growth Act.” According to Rutherford’s office, this legislation would “hold DHS agencies more accountable in administering their major acquisition programs and would give Congress greater oversight of troubled programs to prevent wasteful spending of taxpayer dollars by agencies like the Transportation Security Administration (TSA), Customs and Border Protection, the U.S. Coast Guard, and the Federal Emergency Management Agency (FEMA).” The House passed the bill without opposition towards the end of March. McCaul also put Rutherford on his new Task Force on Denying Terrorists Entry into the United States.

“As terrorists and foreign fighters in Iraq and Syria seek to return home or travel to other regions in the wake of the defeat of ISIS on the battlefield, cooperation among U.S. military, national security, and law enforcement agencies is vital,” Rutherford said when the bill was passed last week. “When these fighters move from the Middle East to the West, information collection and tracking becomes extremely difficult ensuring federal agencies have access to the same critical information. This bill will ensure DHS personnel overseas are better able to combat threats in the fight against terrorism. I thank my colleagues on both sides of the aisle for joining me in taking an important step toward making our citizens safer.”

The bill, which McCaul cosponsored, now heads to the U.S. Senate. So far, there is no sponsor over in the Senate.

The emptiest of the Empty

Permalink Submitted by Jack O'Rourke on January 20, 2018 - 7:38am
The emptiest of the Empty Suit Caucus who they let run non-controversial bills downfield -- and in exchange, he's so far up Trump's ass he bumps in to Sean Hannity during Presidential bowel movements. A fine product of gerrymandering and Citizens' United. Let's hope this non-entity draws a good challenger.