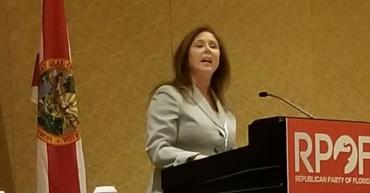 The Republican Party of Florida has selected a new committeewoman to represent Florida on the national Republican stage.

King will replace Sharon Day, who was recently tapped by President Donald Trump to be the U.S. ambassador to Costa Rica.

King, a Manatee County resident, has close ties with party faithful. She formerly served as the party’s Secretary. She faced off against Trump supporter Karen Giorno for the position, ultimately taking the party’s support to represent the Sunshine State in Washington.

Giorno and King both had ties to the president’s political campaign -- Giorno served as Trump’s Florida director and as a senior adviser to the president when he ran for office last year.

King took a critical voting bloc among Trump loyalists to secure a win over Giorno on Saturday. Several of the party’s officials and top Trump organizers said they were confident she would be a strong advocate for Florida at the RNC in the days leading up to the election.

Other party members with close ties to President Trump’s campaign came out in full force to support King, calling her a true believer of the president and thanking her for her steadfast support.

“There is no one that can measure up to Kathleen King,” said former Florida statewide grassroots and coalitions director for the Donald Trump’s presidential campaign, Annie Marie Delgado. “She’s dedicated, she’s put her time in, and she actually voted for Mr. Trump.”

“She’s an amazing lady. She’s very much a go-getter,” said Nathan Wilson, chairman of the Trump campaign’s Osceola County operation. “She’s also one that actually takes care of making sure the needs of those around her are also taken care of...professionally, she is solid.”

Ingoglia reiterated his support for King, expressing confidence she had what it took to move the party forward.

“The RPOF commends King and is certain she will represent the Sunshine State honorably, while helping keep our state party healthy and robust," he said.

She's gotta be a better

Permalink Submitted by C Breeze on January 8, 2018 - 9:50am
She's gotta be a better choice for the Florida Republican Party than that of the Democrat National Party's "pick" of Congressman Keith Ellison, a Muslim and former, (and present?), member of Louis Farrahkan's "Nation of Islam", who thinks ANTIFA is a legitimate and positive social organization for "GOOD" deeds...(How "wrong-headed" can one man be ?!?!??)---(Unless he's nothing more than a "stalking horse"...)