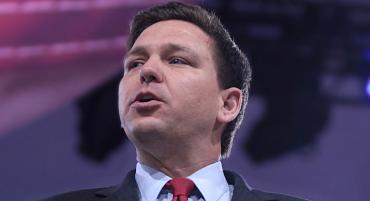 U.S. Rep. Ron DeSantis will officially kick off his campaign for Florida governor in South Florida next week.

DeSantis, who announced his candidacy for the state’s top Cabinet position earlier this month, will launch his statewide campaign at the Embassy Suites hotel in Boca Raton on Jan. 29.

The self-declared “#1 Conservative,” DeSantis has represented Florida’s 6th District in Congress since 2013 but his name widely flew under the radar in the gubernatorial race until recent months when political insiders began speculating he would make a bid for governor.

“Congressman Ron DeSantis is a brilliant young leader, Yale and then Harvard Law, who would make a GREAT Governor of Florida. He loves our Country and is a true FIGHTER!” tweeted Trump.

DeSantis has indicated Trump’s push was part of what encouraged him to run for the job -- and touted the president’s endorsement on his official campaign kickoff flyer and in emails to his supporters.

“The excitement and momentum is squarely behind Ron DeSantis,” the email read. “He has already been endorsed by President Donald Trump, Sean Hannity, and Mark Levin — and we haven’t even kicked off the campaign yet!”

Though he isn’t the first Republican to declare for the position, DeSantis is so far the only other major candidate to run for the job besides Commissioner of Agriculture Adam Putnam and former state Sen. Jack Latvala.

Latvala’s bid, however, is widely speculated to be dead after he resigned from the Florida Senate following an investigation into claims he sexually harassed and groped at least seven women in Tallahassee. An explosive report from the Senate Special Master detailed harrowing experiences from Senate staffers who also alleged the senator exchanged votes for sex.

Putnam has officially been in the race for governor since May of last year and is widely seen as the GOP frontrunner, but recent polls show DeSantis closing in on the Ag Commissioner’s lead.

A recent Florida Chamber of Commerce poll found DeSantis within five points of Putnam, who has raised well over $15 million for his bid. With Trump’s backing and a strong set of donors, DeSantis could prove competitive with Putnam in the race.

DeSantis has also been cruising around conservative news networks, frequently making appearances on Fox News, which appeals to a more conservative voting bloc.

Putnam’s team has criticized DeSantis for being a typical Washington, D.C. insider. Putnam, too, has served in Congress, where he represented Florida’s 12th Congressional District from 2001 to 2011.

“In true Washington insider fashion, Congressman Ron DeSantis announced his latest campaign from an empty TV studio to broadcasters in New York,” Putnam spokeswoman Amanda Bevis said after DeSantis’ announcement. “DeSantis is a typical Washington politician who is focused on nothing more than his next promotion.”

Putnam has remained local since then and has served as Florida’s Agriculture Commissioner since 2011.

The army of Trump supporters

Permalink Submitted by Debbie on January 24, 2018 - 10:53am
The army of Trump supporters is behind DeSantis!!

Permalink Submitted by RepublicanConscience on January 23, 2018 - 6:26am
Wow, Imaging Ron DeSantis on the top of the ticket, and Rick Scott on the next line for Senate. Can't wait for November!