Rick Scott: Dreamers 'Must Be Allowed to Pursue the American Dream' 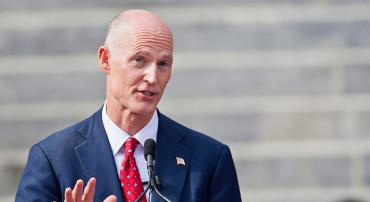 Gov. Rick Scott is urging the Trump administration to hold off on ending an Obama-era program protecting young undocumented immigrants from deportation on Friday.

“These kids must be allowed to pursue the American Dream, and Congress must act on this immediately,” Scott said in a statement released Friday.

Rumors swirled Friday that President Donald Trump would end the Deferred Action for Childhood Arrivals program Tuesday, leaving the futures of millions of undocumented immigrants hanging by a thread.

“I do not favor punishing children for the actions of their parents,” said Scott, taking a stance against ending the program.

The governor said he was “encouraged” by legislation from U.S. Rep. Carlos Curbelo, R-Fla, and U.S. Sen. Thom Tillis, R-NC, which would provide an eventual path to citizenship for the undocumented immigrants.

Curbelo and Tillis’ plan would provide amnesty for around 800,000 undocumented immigrants who received work permits under DACA and could provide green cards for up to 2.5 million young immigrants if they go to college, join the military or keep a job.

Scott also said President Barack Obama was “wrong” to issue the executive order in 2012 which stopped the deportation of undocumented immigrants who entered the United States as children.

“He should have done it in conjunction with Congress, which is how we make laws in our democracy,” Scott said in a statement released Friday.

Some of the undocumented immigrants, called “Dreamers,” then began receiving work permits.

According to the American Immigration Council, there are an estimated 1.8 million immigrants who might be, or might have become “Dreamers” under Obama’s executive order.

“They pledge allegiance to our flag. They are Americans in their hearts, in their minds, in every single way but one: on paper,” President Barack Obama said at the time.

Hundreds of thousands of undocumented immigrants in Florida could be affected by Trump’s decision, since Florida is home to a significant number of Dreamers.

Scott’s statement also symbolized a rare difference in opinion from President Trump, who he has mostly agreed with since he took office earlier this year.

Other Floridians have waded into the fray against ending DACA. Miami billionaire Mike Fernandez has pushed Curbelo to help arrange a meeting with House Speaker Paul Ryan to advocate for the program.

“We love the Dreamers,” Trump told reporters Friday. “We love everybody.”

So I may understand this

Permalink Submitted by June on September 4, 2017 - 11:58pm
So I may understand this issue, can you answer 4 questions. Is it true these "dreamers " are not kids at all, but adults with an average age of 26 years old? Why haven't they applied or already become U S citizens? Are they self sufficient or are they living on government programs? I hope someone can answer my questions, so I may better understand exactly what this is all about... Thank you

I counted 3 the majority are

Permalink Submitted by The Swampfox on September 5, 2017 - 10:20am
I counted 3 the majority are in their 20's & 30's. Whether they've applied for citizenship or not is not the question. They are here illegally plain & simple. If they applied for citizenship (which most haven't) they are in the query. Amensity only puts the 800k at the front of the line and encourages illegal entry into the US. How stupid of our politicians. Yes they receive benefits and here's the kicker. My mom worked for nearly 40 yrs. and gets less of a SSI check than illegals entering into the US! first of all they shouldn't be getting a penny if our money!!! Especially coming here the way they did. This is about votes for the a**hole politicians that support amesty. I'm all for immigrants coming to America, do it the right way.

Gov Scott the children are

Permalink Submitted by The Swampfox on September 4, 2017 - 10:42am
Gov Scott the children are not being punished for their parents mistakes. Herein lies the problem with politicians like yourself looking for a senate seat. The problem is the organization you're affiliated with... the government!! Under no circumstances should anyone be allowed to enter And Stay in thus country without citizenship or established residency, the latter restricting certain privileges like VOTING! You are doing nothing more than watering down Obamas Dreaner Act which BTW is unconstitutional! If you don't have the balls to stand for what's right then once your terms up retire to your mansion and enjoy life for a change.

"Overpopulation in the United

Permalink Submitted by Veritas on September 3, 2017 - 6:00am
"Overpopulation in the United States will become THE single greatest issue facing Americans in the 21st century. We either solve it proactively or nature will solve it brutally for us via water shortages, energy crisis, air pollution, gridlock, species extinction and worse." - Frosty Wooldridge Frosty Wooldridge writes five days a week for Before It's News. Read his articles under Immigration, Environment and Conservative op-eds Florida is overcrowded and our roads are way beyond capacity. Houston is way too crowded and over built. So, when a natural disaster strikes in a low lying area, the results are devastating. The resources are just not there to help people. So overpopulation is a problem. Endless immigration is unsustainable.

Permalink Submitted by C Breeze on September 2, 2017 - 1:07pm
BULLS_ _T ! ! ! Pay ATTENTION Governor !...... Why do you suppose WE want a "wall" on our Southern border...AND .... LEGITIMATE "Citizenship Processing? ? ? [Upon reflection, YOU might not be smart enough to be "Senator"]. 12 million "illegals????..THAT number was static when Obama "took office" in 2008 (but I doubted that with serious reservation even back then), Then our "community-organizer-in-chief" brought in MILLIONS upon MILLIONS MORE ! NO TO DACA; NO TO DREAMERS; NO TO AMNESTY; NO TO FREE TUITION FOR ILLEGALS; and while we're at, NO MORE "ANCHOR BABIES" because they come with too many "anchors" of their own. ENOUGH IS ENOUGH ! ! ! We must solve the "immigration" problems first ("LEGAL" immigration that is)....THEN and ONLY THEN can we discuss "ILLEGAL ALIEN INVADERS"! WE are "stressing out" EVERY public service and private business and charity we have to the point of collapsing these systems ! STOP WASTING OUR TAX MONEY ON "ENTITLEMENT SEEKERS AS A WAY OF LIFE" for people who don't really want to be here, except to exploit America ! THERE, I SAID IT ...(somebody in this destructive "politically correct" environment had to) ! ! !

Permalink Submitted by Kennebec Smitty on September 2, 2017 - 12:43pm
BS!Scott just lost my vote for Senator,those people are here illegally & should be deported!

Scott is daft "“He should

Permalink Submitted by Frank C. on September 2, 2017 - 12:32pm
Scott is daft "“He should have done it in conjunction with Congress, which is how we make laws in our democracy," We are in NO way a democracy. And why is it no politician abides by their oath to office anymore?

That is his Senate race

Permalink Submitted by MMRP on September 2, 2017 - 8:10am
That is his Senate race statement (pretty slick of him). Remember he is for Enterprise Florida & Chamber of Commerce (cheap labor) just like face book, google and big corporations. Nothing to do with anything more than that. Why the hell do we have laws? Oh wait its just for the American citizen. Wake up people this is why our country is in the shape its in!

Permalink Submitted by Citizen Voter on September 2, 2017 - 6:15am
Governor Scott hit the nail on the head. Very concise message from our remarkeable two-term Governor of Florida and hopefully our next U.S. Senator who will continue representing the best interests of Citizens and Floridians.

Permalink Submitted by C Breeze on September 2, 2017 - 1:17pm
"NEXT" Senator?....(No longer a viable option for a Governor pandering to a State & Country's CITIZENS who have NOW "seen behind the curtain"...) I did support him for eight years (Thanks Gov), "But now he has crossed the line"... and now we'll see just how many "illegal alien Invaders" will ILLEGALLY vote for the Gov.... (I won't, he's not to be trusted !

Give them a path to Permanent

Permalink Submitted by RepublicanConscience on September 2, 2017 - 6:06am
Give them a path to Permanent Residence but not Citizenship. Their illegal entry must have a price and that would be never to receive citizenship and thus no right to vote.

I agree with you, NO

Permalink Submitted by Walker on September 2, 2017 - 12:39pm
I agree with you, NO citizenship and NO vote. They are here illegally. If they want to vote, go home, come back legally and apply for citizenship.