Will Weatherford and Allan Bense kicking off "Rebuild 850"

Among all the charities appealing to your spirit of giving this holiday season, you might want to consider putting the Panhandle homeless and still-hurting victims of Hurricane Michael at the top of the list.

Today is the last day of a hurricane season that saved its worst for last, and if ever there was a right time to remember the tens of thousands of souls in Northwest Florida most of us will never see, folks trying their hardest to pick up the pieces and rebuild their lives, their communities, their livelihood -- the time is now.

I hope we didn't forget about them. Certainly the intense 2018 midterm elections created the perfect distraction.

Luckily, two former state House speakers, Will Weatherford and Allan Bense, wouldn't let us forget. As you probably already know, on Nov. 1 they launched a new initiative, "Rebuild 850" -- "850" for the area code of the damaged region -- to keep the continuing needs of Panhandle communities “front and center.” Bense himself, Weatherford's father-in-law, gave $25,000 to kick the effort off.

The idea is to cut through the red tape, address storm victims' needs immediately, don't make them wait any longer than they have to for state and federal government involvement.

“It’s natural after a disaster for immediate help and donations to flow and then ebb, as other news dominates the headlines,” Bense said at the launch. “But North Florida’s recovery will go on for months and even years, and we must keep the focus on helping so many communities through their ongoing needs.”

Weatherford put it in perspective. “Once you see how people in these communities have been forced to live and how they are struggling, you can’t help but be moved,” he said. “We need to continue to tell their stories and keep long-term North Florida recovery in the public eye.”

Let me tell you what I saw in Panama City and Mexico Beach one weekend only days before the election. It was a weekend of contrasts for me.

While candidates were at their peak spending millions of dollars to attack each other, I saw some streets still lined with thick stacks of refuse.

I saw splintered home framing, soggy tangles of insulation, home appliances and tree limbs meshed into one another, still awaiting collection and disposal.

I saw homes -- the ones that weren't flattened -- missing roofs, dormers, balconies, whole walls. Street after street, there was a rancid, musty smell. I was reliving Katrina and I wept to see the survivors, clinging as my neighbors in Mississippi once did to hope, each other and a few tiny bits of nostalgia.

Many who returned since the storm are living in campers, tents or are bunking with neighbors, and even now relying on portable toilets and boxed ready-to-eat meals provided by FEMA, the Red Cross or other volunteers. The schedule for the return of utilities such as electricity, gas and Internet service were being measured in months, not days or weeks, at least when I visited. Many roads are still blocked across the area, so badly damaged are they. Commercial services in places are minimal to none. 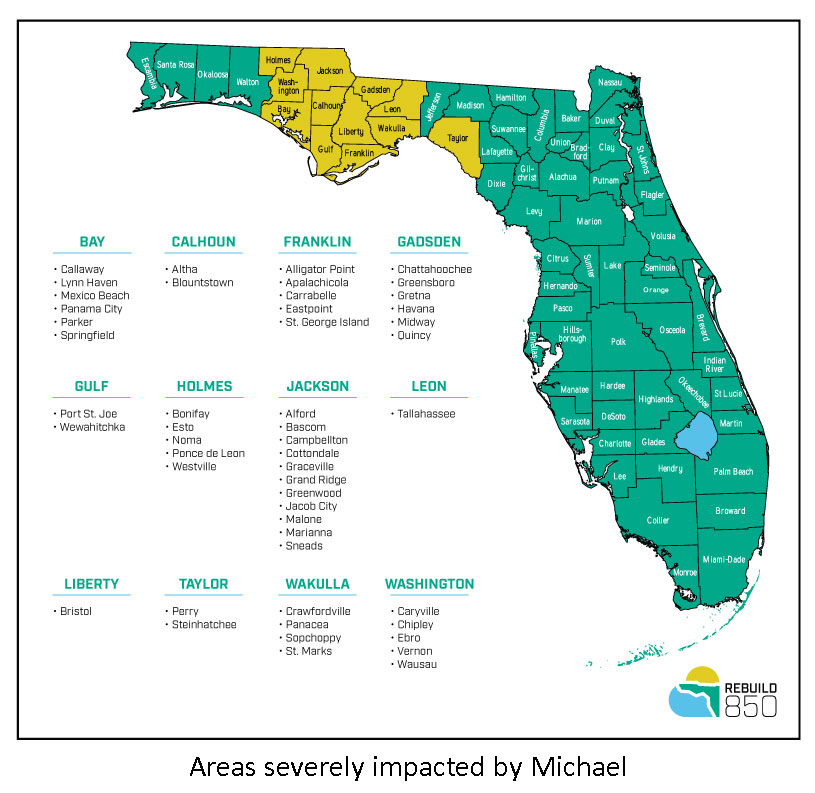 Hurricane Andrew nearly three decades ago devastated Homestead, a Miami suburb. Miami attracts bright lights and cameras and international media. The Panhandle, not really. The people most hurt by Hurricane Michael are not wealthy -- in fact, some are barely sustainably solvent. The roof over their heads and each other are all they have.

Everywhere I saw volunteers. Linemen in buckets repairing power lines, church groups with jackhammers and chain saws. All kinds of groups bringing in food and water and infant supplies. People really were helping people. I met some of the 400 U.S. Army Corps of Engineers personnel who had volunteered to assist residents with debris removal and route clearance, temporary emergency power, temporary roofing and technical monitoring for FEMA's temporary housing mission.

But I fear, as it did on the Mississippi Gulf Coast in 2005, the help will all trickle to an end in a few weeks, when volunteers and workmen return to their lives elsewhere.

This is what makes me appreciate the mission of Rebuild 850. And why I'm giving it a plug to be your charity of choice this season of giving.

The Rebuild 850 campaign has plenty of Christmas spirit, helping it pick up more partners, including the Tallahassee Democrat. Partners of the initiative are calling on individuals, businesses and organizations to donate toys and money by the thousands to brighten the holiday for the families still in need.

Toy donations will be collected at the Tallahassee Democrat from 10 a.m. to 3 p.m.  Dec. 6. The “Fill-A-Truck” toy and funds drive is also sponsored by AMWAT Moving Warehousing & Storage, Prime South Properties, Tallahassee Board of Realtors, Sachs Media Group, Rogers, Gunter, Vaughn Insurance, Junior League of Tallahassee and the Democrat.

“This toy drive is a great opportunity for individuals, businesses, and organizations to step up and help our neighbors find some joy this holiday season,” Bense told the Democrat.

Don't forget the Panhandle. It's not fixed and all better. Not even close. If you're able, remember the resilient residents who live there with something tangible this Christmas. Log onto their website and you'll see how to donate.

The city government of

Permalink Submitted by Voted Blue on November 30, 2018 - 10:50am
The city government of Pensacola has complained bitterly about the poor response by the Scott administration to the city's needs after the storm and Scott's poor response obviously extends throughout the affected area. In cases where there's been near total destruction, the state needs to have a relocation and relocation assistance plan to help victims to quickly and expeditiously move to some other unaffected area of their choice.

"Up to date building

Permalink Submitted by C Breeze on November 30, 2018 - 6:35am
"Up to date building ordinances" will go a very long way towards ameliorating this devastating degree of damage in the future..! New Building construction, never brought "up to date" via regularly improved ordinances for decades and decades, never stood a chance...