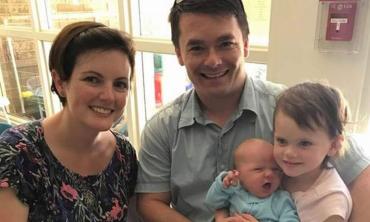 Dean Crouch at home with his family

The sheer absurdity of it ... I'm talking about Dean Crouch. The Tallahassee Academy Sports manager whose selfless action probably saved at least one life -- yet, cost him his job. The story has been exploding on social media since Wednesday, when it first appeared in the Tallahassee Demomcrat, and why wouldn't it?.

It's the world turned upside down. And here's where bad news gets worse: Heroes in the workplace victimized for performing some lifesaving good deed aren't as rare as you might think. In fact, Crouch is actually the second head-spinning employee-done-wrong story to go viral in the last seven days. Wait until you hear what happened to Jeffrey Sumpter in Bridgeport, Conn.

The difference is, Crouch is local. He's ours. What happened to him right here in Florida could have happened to any one of us. To recap:

Crouch, 32, a married father of two, never hesitated when he tackled a man as he tried to run out of the Mahan Drive store with the .40-caliber pistol he'd just stolen. Crouch recovered the gun, a stolen backpack, five boxes of ammunition and two magazines for the Glock. And he held the man in an office until police arrived.

According to court records, the thief, Jason White said he and his family were being threatened by an unknown person and he wanted the gun to “kill him."

“He repeatedly said, ‘I stole and I admit to it’ and ‘I will steal again when I get out of jail,’” officers wrote in their report.

Not only that, but just hours before he was taken into custody at Academy Sports, White stole two handguns from Cash America Pawn on South Adams Street, according to Tallahassee Police. The guns were found in his car.

Dean Crouch was a hero in anybody's book.

But was he celebrated by his employer? Did Academy Sports give him a bonus? A commendation? How about a write-up in the corporate newsletter?

He got a write-up all right. A pink slip. On Tuesday Crouch was fired.

Ryan Hobbs, Crouch's attorney, told the Democrat, “Academy has decided to, instead of treating him like the hero he is, they terminated his employment effective immediately  because he put his hands on Mr. White.”

Academy Sports' corporate spokeswoman Elise Hasbrook told the Democrat she couldn't comment on specific personnel matters or policies. “While the incident ended without injury, actions inconsistent with corporate policies were taken,” she said. “We addressed the matter with the local store and individuals involved.” End of discussion.

Think past this for a minute.

After every mass shooting in this country, every one without fail, we shake our heads, bury the dead and pour over the shooter's background -- what he said, what he did, what clues we had. Sometimes for months. Always this grim post-mortem on how it was we missed the signs there was a killer in our midst.

Yet, here we have a suspect -- no, an unrepentant thief who confessed to stealing a gun so he could go shoot his enemy. I'm no psychiatrist, but White's comments to police later tick every box I've ever seen identifying a dangerously violent, profoundly disturbed individual.

My point here is, because of Dean Crouch, because of his quick action and bravery, for once we caught a potential killer on the FRONT END of the crime. We got him before he could make the big headlines. Before he used a stash of stolen firearms to take the lives of somebody's loved ones, somebody's family members, friends or neighbors perhaps -- in our own community.

There has to be something wrong with a corporate policy so rigid it would take Dean Crouch's livelihood away for such a selfless and, frankly, inspirational action. Academy Sports officials need to ask themselves what message they just sent to the people who work and shop in their stores. Backing up to last week for a moment, consider the horrific plight of another employee, 21-year-old Jeffrey Sumpter of Bridgeport, Conn. Sumpter lost a whole lot more than his job.

Last October the young man was working the night shift at a Dunkin' Donuts in Norwalk when three assailants jumped him on their way to the till. Sumpter was able to stab one of them in the leg, after which they ran out of the store and later were apprehended.

He had fought back, deterred a crime. No one died. Police were able to take criminals off the street, if only briefly. Good for Sumpter, right?

Forget it. On Monday he was sentenced to 18 months in jail. Sumpter -- who was convicted of felony first-degree assault -- also will have to spend three years following his release on probation. If he breaks the law during that time, he could be made to serve all or part of a 42-month prison sentence.

Thank you, Florida Republicans: Under Connecticut law, assault victims cannot use deadly force if they're able to retreat from their attackers. Unlike Florida and 26 other states, ultra-progressive Connecticut has no “Stand Your Ground” law, which entitles citizens to use force in self-defense if there is a reasonable belief of a threat.

"I was defending myself," Sumpter said during his hearing.

Judge John Blawie told Sumpter he believed his version of events, but had to follow the letter of the law.

So, there you are. Case closed.

Sometimes I think as we moved into the 21st Century, social pressure, political pressure and our culture generally evolved into something unhealthy for America. Somehow a whole system crept unseen into place, designed to keep people from being extraordinary. (And there are people who still wonder how Donald Trump was elected president.)

You want more evidence? There are many, but these are the employees I particularly remembered after their stories hit the news: In 2012 Thomas Lopez, 21, a lifeguard on Hallandale Beach, helped save a drowning man. But instead of being praised for his actions, he was fired from his $8.25-per-hour job for venturing outside his assigned patrol area.  "What was I supposed to do? Somebody needed my help ..." Lopez said.

In 2017, Dillon Reagan, 32, was fired from Home Depot in Portland, Oregon, for attempting to foil a  suspected kidnapping in the store's parking lot. Reagan heard a woman scream that a man was kidnapping her child. He called police, followed the suspect and later gave statements before returning to work. But he was rebuked by his manager for intervening, and three weeks later was let go for violating Home Depot's safety policy.

This past January, an Oakland, Calif. grocery store clerk with 17 years on the job was fired for stopping a late-night shoplifter. Residents of the high-crime neighborhood still can’t understand why the employee was punished for trying to do the right thing. The clerk, known to customers as "Tang," followed the shoplifter out of the store. He stayed on his tail long enough for the thief to be identified and caught. That was his crime. A spokesman for the store said it's corporate policy that employees do not engage physically with customers. Customers, meanwhile, fed up with being victims of criminals in their neighborhood, started a #SaveTang movement online.

In the case of all three -- Lopez, Reagan and "Tang" -- the employers ultimately waved a white flag, succumbing to social media pressure. All were offered their jobs back and all refused with some form of "No thank you, I'll hold out for better."

Which is what I hope Dean Crouch will be able to do. Tallahassee is rallying around the Crouches. It won't be long before somebody who appreciates the character of this man, what he did when the chips were down, is going to snap him up and move him into a far better job. I truly believe that.

On the North American

Permalink Submitted by Tampaguy on July 14, 2018 - 2:35pm
On the North American Continent, there existed small Colonies from Freedom seekers. They had no "Government", but ruled locally based on their needs - the "New World" became famous for freedom and self-determination. Their success drew still more "Colonials", and it was not long before "States" were formed... and later the States helping one another. THIS IS HOW THERE HAPPENED TO SHORTLY INSPIRE AMERICAS' FOUNDING FATHERS. The true birth of a new, republic... the United States of America!

The young gentleman is back

Permalink Submitted by Avalon on July 14, 2018 - 11:26am
The young gentleman is back on the job at Academy. Once again the public outcry has been heard and stupidity has been corrected as much as you can correct such a condition. It is often ingrained.

Permalink Submitted by Claude Kirk on July 14, 2018 - 11:18am
Well they re-hired Mr. Crouch but not until the public made such a BIG stink that they had to. How disrespectful to America and his past service for the CEO of Academy Sports (who served in the Army after attending West Point) allowed this lame policy to be in place even 1 hour after he accepted the job of CEO. The CEO of Academy Sports should be dishonorably discharged from his current position and made to sell guns for one full year in the Academy Sports location nearest his home before being given his key back to the "Executive Washroom".

Permalink Submitted by eaglesnester on July 14, 2018 - 10:46am
looks to me like there are pockts of insanity in the us similar to what is going on in the looney bin that Great Britan has become. If this is indeed the case God help us all.

Permalink Submitted by Kap on July 14, 2018 - 10:33am
Demon crats don't want people too think for themselves. Employers don't want employees that act on sound moral judgement because they might get sued if it goes south! Siss on you Pister boss you un American prig! bet they support gun control also. Just like the Obama administration don't make waves make America a pansies country all twisted sisters and Atheists with a backbone like a dog! so he can lick himself!

Permalink Submitted by Larry Lomberto on August 7, 2018 - 12:33pm
'Atheist' and 'Freethinker' are pretty much synonymous terms, my fellow Conservative.

MR. President,... There MUST

Permalink Submitted by C Breeze on July 14, 2018 - 8:06am
MR. President,... There MUST be SOME position for these men who all selflessly 'stood up' for "the right action to take at the right time" (AKA: "The American Way"). Someone please "step up" in the "face of corporate intractability and surrender" and prove to these heroes that "ACTIONS DO MATTER"!

Permalink Submitted by me on July 13, 2018 - 6:00pm
This is insane.. - I know the company has policies but it's time Democraps pull their heads out of the hole and put them back on their shoulders and use their brain.. Better to save someone than to be sued for just standing there - not doing a dang thing.. Well lets see how you fell is you need help some day?

Unfortunate that all of this

Permalink Submitted by KELLY ALDRICH on July 13, 2018 - 5:55pm
Unfortunate that all of this craziness usually was started by some ridiculous lawsuit where a noteworthy amount of money was won by a group of low class lawyers with no dignity

You're just now noticing this