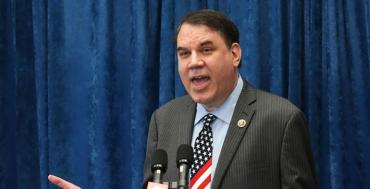 PolitiFact -- a self-proclaimed unbiased fact-checking website aiming to sort out the truth in politics -- made headlines for all the wrong reasons on Thursday when it announced one of its new hires, controversial former Florida Congressman Alan Grayson.

“Big news! Former Florida U.S. Reps. @DavidJollyFL and @AlanGraysonhave agreed to serve as reader advocates for PolitiFact, PolitiFact tweeted. “They'll be critiquing our work and publishing on http://PolitiFact.com. Read why we're doing this, and let us know what you think.”

The site then followed up explaining why they chose Jolly and Grayson in a second tweet.

“We've asked @DavidJollyFL and @AlanGrayson to critique our fact-checks as part of our broader effort to improve trust and credibility in fact-checking. We hope to learn from them, and we hope all our readers learn as well,” the site wrote.

PolitiFact said in a related post on their website that they selected the two former Florida congressmen because they had been subjected to fact-checking while in office.

One of the claims Grayson made (ruled Pants On Fire): that Ted Cruz wasn’t an American citizen.

It wasn’t long before readers -- and journalists alike -- also informed Politifact of the history behind Grayson’s storied political career, which was rife with controversy surrounding his personal life.

Grayson fell from grace in part due to allegations of domestic violence from his wife, Lolita, who said he abused her for 20 years and threatened to kill her.

Even fellow Democrats vocally opposed Grayson when he served in Washington.

"His actions aren't just disgraceful to the Democratic Party, they disgrace the halls of Congress," said former U.S. Senate Minority Leader Harry Reid when Grayson was running for U.S. Senate.

Grayson’s fiery temper also spilled over to journalists, one of whom Grayson threatened to have arrested when he asked about the domestic abuse allegations.

A video of the 2016 incident shows Grayson appearing to nudge POLITICO reporter Edward Isaac-Dovere as the two move throughout the hallways at an event in Philadelphia.

Grayson becomes visibly upset in the video after Dovere asks about the domestic violence incident.

“You know, I’m hoping that somebody comes here and arrests you,” Grayson said at the time. “We’ll see if that happens or not.”

The story made headlines during the 2016 campaign season, when Grayson was running for U.S. Senate, but it wasn’t the first time his explosive temper had gotten the best of him. Grayson has a history of losing his temper, at one point even calling the Tampa Bay Times’ Adam Smith a “shitting robot.”

“Is this a joke?” asked POLITICO's Jake Sherman.

That wasn’t enough for PolitiFact to give him a hard pass at the first go, but the backlash was enough to get Grayson fired before the gig had even begun.

“We called Alan a short while ago and informed him that we would be canceling our agreement for him to write on PolitiFact,” the site tweeted later Thursday afternoon. “We remain committed to this experiment, however, and will be seeking out a Democrat to replace Alan. If you have a good suggestion, please reach out.”

It’s unclear who PolitiFact will put in place of Grayson.

Dan Webster Relishes the Idea of a Rematch With Alan Grayson

Permalink Submitted by RICHARD RIKER on February 2, 2018 - 2:01pm
Democrats Ted Kennedy,Tom Lantos,Bob Matsui,Joe Moakley,or Robert Byrd should be hired as reader advocates for PolitiFact, They would give the most unbiased views. Oh, that's right, they're all dead. Oh well, just hire two Republicans.

Permalink Submitted by RepublicanConscience on February 2, 2018 - 6:45am
The "Fact" that Grason's Resume actually got to a desk in HR, takes the "Fact" out of PolitiFact. It needs to be renamed "PolitiCrap."

your Mom got under the desk..

How did they think it was

Permalink Submitted by George on February 2, 2018 - 6:22am
How did they think it was going to pan out? Grayson also said the Republican plan for health care is they want you to die. He was always good at name calling, deflecting questions and carrying water.