Pariente's Mind Is Made Up on Scott, There's Just Too Much Evidence 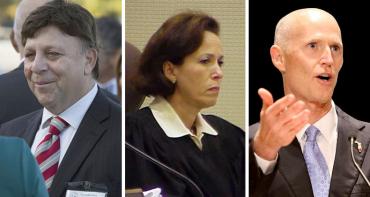 In the pending lawsuit that contends Gov. Rick Scott’s successor should hold the privilege of naming the next three Supreme Court justices, one thing now is obvious: Every current justice who has actively worked against the governor should recuse.

It's the right thing to do. It could go a long way to restore faith in the integrity of the state's highest court.

Florida public record is awash in evidence of judicial activism against Scott -- but none so blatant as Justice Barbara Pariente's.

News stories already have exposed Justice Jorge Labarga's admission of threatening lawyers short and long-term, Justice Pariente's open campaign in 2012 to keep Scott from selecting justices -- exactly what the lawsuit brought by Florida League of Women Voters and Common Cause is meant to decide -- and Labarga and Pariente together attacking members of the state’s Judicial Nominating Commission on an open microphone Nov. 1.

But there is another nearly forgotten story that exposes Pariente as such a virulent Scott opponent in 2013, she was willing to put her money where her mouth is.

In the wake of Scott's appointment of Alan Forst to the Florida 4th District Court of Appeal, Sunshine State News uncovered nearly $30,000 in donations Pariente and Justice Peggy Quince made to the liberal activist group that opposed Forst's candidacy.

A former high-ranking government attorney told SSN at the time, "I believe this is the first time in our history that two sitting Supreme Court justices have diverted campaign cash to a group that used the money to attack a fellow Florida Bar member nominated to the appellate court."

Forst very definitely was the governor's selection. The donations were clearly a statement on Scott.

Contributor records maintained by the Florida Division of Elections show that Pariente and Quince respectively donated $23,000 and $5,922.65 of their leftover campaign monies to Democracy at Stake less than two months after winning retention to the high court in November.

Democracy at Stake was founded with the express purpose of defending the justices and their successful retention campaigns against critics who charged that they (along with Justice R. Fred Lewis) are left-wing judicial activists who do not interpret law according to its original public meaning.

Democracy at Stake had criticized Scott's selection of Forst based on his lack of trial court experience and his self-identification as a conservative. Ironically, none of the three justices for whom Democracy at Stake had campaigned served as a trial court judge prior to his/her appointment to an appeals court; Lewis himself had no judicial experience whatsoever before Gov. Lawton Chiles appointed him to the Supreme Court in 1998.

Scroll through the Democracy at Stake Facebook page here to understand what Pariente's money supported. Then ask yourself if Pariente can render a fair and unbiased opinion in a lawsuit that will decide which governor will choose the next three justices -- Gov. Scott or his successor.

It's probably inconsequential that In April, Pariente was the guest speaker at a meeting of the Palm Beach County League of Women Voters at Atlantis Country Club in Lake Worth. The Palm Beach chapter is arguably the most influential in the Florida League, which is co-petitioner in the pending case.

And there is no proof Pariente and FLWV President Pam Goodman are friends, let alone ever vacationed together during redistricting, as current rumor would have it. "The first and only time I ever spoke to Justice Pariente was when we were introduced at the League of Women Voters of Florida's 85th anniversary," Goodman told SSN Thursday.

But certainly it's clear when you put all the hard evidence together: Barbara Pariente should be disqualified from participating in the pending lawsuit on Gov. Scott's last-day appointment powers.

Nancy, one of your best

Major thankies for the

Permalink Submitted by Ellynrura on November 23, 2017 - 10:57am
Major thankies for the article post Much thanks again Fantastic hzz3dyt4 tumblr com/ Eagon

Im thankful for the forum

Permalink Submitted by Ellynrura on November 22, 2017 - 11:24pm
Im thankful for the forum topic Thanks Again Will read on hzz3dyt4 tumblr com/ Nicolette

The biggest point of this

Permalink Submitted by it is on November 20, 2017 - 11:17am
The biggest point of this whole story and one you failed to make, is there would be no need to recuse herself if Scott did not try to take on a legal requirement to appoint that has never been done prior, and is not his to take... journalism 101...

Just what the hell are JUDGES

Permalink Submitted by C Breeze on November 17, 2017 - 6:13pm
Just what the hell are JUDGES doing "buying favor" with CAMPAIGN CASH???? and just WHERE & WHO do these "clay-footed-referees" buy "political favor" FROM???? Well, I'll tell you Folks: JUDGES ARE IN FACT "POLITICIANS"... of the worst kind; they "first cloak themselves into a judicial robe ALREADY PACKED WITH POWER TO WIELD (just like Superman's cape) ! Where do they get that "power"?...from the very same place they get "campaign funds" [What a joke!!!..."campaign funds for appointees"!] They are "funded" by OTHER lawyers (You know, like the 219 'lawyers' mixed among the 535 Congressional Representatives "screwing up" the Federal government... and scores of them also slinking through Tallahassee... not to mention the untold numbers of them barely making it doing real estate closings, etc. etc....ALL looking for the "Golden Ring" on the "merry-go-round": judicial appointments, government 'seats' or some other legal "power position to enable them to "lord it over" their myriad of JD peers in the "small, but powerful circles, they travel in". WHO "funds" them?...They "fund" each other.... "Quid pro quo" is a necessary "fact of life" among them, and an ultimate anathema to we "little people"... REMEMBER THIS the next time you enter a voting booth and you are asked if you want to 'extend' a Judge's tenure 'on the bench'.....The 'answer' must ALWAYS be "NO"! Let them "run" for that position (using their mysterious "campaign funds") all over again so we can learn of their "clay-footed-decisions" (should they have any...) before we "carry them over". [[[ Years ago, I remember a 'saying' from the adults of my "youth" while still trying to determine what my own future held: "Never encourage your kids to be lawyers." I didn't understand it back then,... but "life" has translated that 'saying' for me over the years...]]]

But she won’t refuse herself.

Permalink Submitted by Corey on November 17, 2017 - 2:33pm
But she won’t refuse herself. She does not care about justice.

Opposing Rick Scott is as

Permalink Submitted by A Non Mouse on November 17, 2017 - 1:01pm
Opposing Rick Scott is as American as apple pie. The man is nothing short of a criminal. This "journalist" attacks justices who are trying to preserve the integrity of the judiciary by keeping Scott's under-qualified political cronies (see, e.g. Eric Eisnaugle) from serving what are essentially career appointments in our state appellate courts. If Scott and his accomplices on the JNC were capable of selecting qualified jurists, this would not be an issue.

You are idiot of the highest

Permalink Submitted by Walker on November 17, 2017 - 7:05pm
You are idiot of the highest degree! You are ignoring the job growth under Scott. You are also ignoring the very, very low unemployment rate. Also ignoring that Scott reduced the budget and lowered taxes. He has done a tremendous job of Governor. You need to open your mind and ook at the facts.

You are an idiot of the

Permalink Submitted by Ruuner on November 17, 2017 - 10:50pm
You are an idiot of the lowest degree. Job growth has nothing to do with justice. Scott was a crook when he became governor and is a crook today. Besides, the majority of jobs created under Scott are at a poverty level wage. My taxes aren't lower under Scott - must prove how idiotic you really are. You need to stop reading Scott and GOP false facts and open your brain to reality.

You better hope you can prove

Permalink Submitted by Daniel on November 29, 2017 - 2:19pm
You better hope you can prove that Governor Scott was, or is, a "crook." You are seriously defaming a public figure, and without evidence. You are wide open for a defamation suit. You're leaking malice.

When I start hearing GARBAGE

Permalink Submitted by Tampaguy on November 17, 2017 - 11:14am
When I start hearing GARBAGE like this... it makes me question the pure ethics of the Florida Bar.

What ethics? They are lawyer

Permalink Submitted by Robert on November 17, 2017 - 12:30pm
What ethics? They are lawyer's first they protect each other. They are worse than politicians. No morals, no ethics, no accountability!

Permalink Submitted by Tampaguy on November 17, 2017 - 11:12am
Absolutely AGREE! JUSTICE is based on LAW --- not Politics! JUDGES: Please shut your mouths!

Permalink Submitted by Looking for Justice on November 17, 2017 - 11:09am
Way to go Nancy! Keep exposing the unethical behavior of Justice Pariente and Justice Labarga. Keep digging, you'll probably find more. They seem to think they are untouchable.

So how come no one has filed

Permalink Submitted by Robert on November 17, 2017 - 9:22am
So how come no one has filed bar complaints against these Anti-American Socialists?

One thing "Judges" should

Permalink Submitted by C Breeze on November 17, 2017 - 9:00am
One thing "Judges" should DEFINITELY do is KEEP THEIR MOUTHS SHUT IN PUBLIC... AND ALSO... IN EFFORTS TO APPEASE "MEDIA INQUIRY" ! ! ! You "judges" can "lord it" over your courtrooms, BUT, when you "open your minds" and spew your "political mush" from deep in your "politicized thought", you destroy ALL respect that people might hold for your "office" (and that you surely think you deserve).... It's lonely up on "Mount Olympus" (where you really can't see "below" you...) BUT from "down here", we proletariats can look right up your "majestic robes".......SO,.. STEP BACK FROM THE EDGE, and THINK, before DEMEANING yourself !

Permalink Submitted by LLM on November 17, 2017 - 8:46am
Incredible reporting Nancy. And thank you for doing this. Justice Pariente must recuse herself. The evidence is overwhelming and embarrassing to the court.