NRCC, DCCC Get Ready for Congressional Elections Across Florida 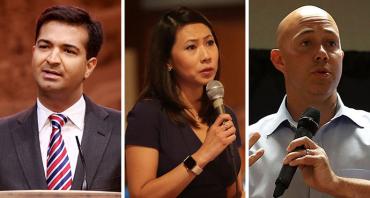 With 27 congressional seats at stake across Florida in November, the two major parties are starting to show their hands as they get ready for the fall campaign.

The Democrats are running candidates in every congressional district in the Sunshine State. Two Democrats in the Florida delegation--U.S. Reps. Kathy Castor and Lois Frankel--have already won reelection as they are facing no opposition whatsoever this year. While U.S. Rep. Val Demings, D-Fla., faces a primary opponent in businessman Wade Davis, the Democrats are assured of keeping that seat in Central Florida since there are no other candidates in the general election. The same goes in CD 24 where whoever wins the primary between U.S. Rep. Frederica Wilson, D-Fla., and businessman Ricardo de la Fuente, who ran for office in California last year, will be elected. Whoever wins the Democratic nod in CD 20, where U.S. Rep. Alcee Hastings, D-Fla., faces a challenge from businesswoman Shelia Cherfilus-McCormick, will face a slightly tougher assignment in November from write in candidate Jay Bonner who ran for Congress before. While 2014 was a good year for Republicans across the nation, Bonner pulled 18 percent against Hastings who took 82 percent in this secure Democratic district.

After qualifying ended on Friday, the Democratic Congressional Campaign Committee (DCCC) weighed in on the races across Florida.

“More than a year ago we laid out the largest battlefield in over a decade and now Democrats across Florida are running strong campaigns that are on track to flip congressional seats,” insisted Cole Leiter, a spokesman for the DCCC. “On top of vying with a hostile national environment, Republican incumbents will have to explain to voters why they’ve spent years in Washington taking their orders from party leadership, repeatedly betraying their community’s best interests when they voted to rip away affordable healthcare and give handouts to big corporations. Needless to say, that is not an easy sell.”

In the meantime, the National Republican Congressional Committee (NRCC) doubled down on its efforts to tie Democrats to U.S. House Minority Leader Nancy Pelosi, D-Calif. The NRCC unveiled a digital ad on Monday reminding voters that Pelosi wants to, once again, be speaker of the House.

“Every day I wake up, I thank my lucky stars that Nancy Pelosi is leading House Democrats,” said Matt Gorman, a spokesman for the NRCC, on Monday. “The NRCC is absolutely thrilled she announced her intention to reclaim the speaker’s gavel next year.”

The GOP has one main target in Florida in U.S. Rep. Stephanie Murphy, D-Fla., but most of the other incumbent Democrats are in secure districts or face Republican challengers who aren’t gaining much traction. Still, there are two incumbent Democrats--U.S. Reps. Al Lawson and Darren Soto--who face major primary challenges. Former Jacksonville Mayor Alvin Brown is taking on Lawson while former U.S. Rep. Alan Grayson, D-Fla., is challenging Soto. Whoever wins the Democratic primaries will be heavy favorites to keep these seats in November.

It is long overdue for once

Permalink Submitted by Yesss on May 8, 2018 - 11:18am
It is long overdue for once in a long time for people to vote for who they think can make a difference for them, not businesses, not special interests, or a stupid party. Who do you think will actually make a difference for you and your family, friends, neighbors... I am also encouraged that a Murphy/Jolly ticket for Gov. could actually occur. Could you imagine for the first time in 20, 30, hell 50 years, we could actually have bi-partisan cooperation in the Gov.'s office. It would literally turn the party idiots and their cronies on their heads... You could really drain some swamp instead of just BS, lies and talking points like this and fake news...

Permalink Submitted by C Breeze on May 8, 2018 - 12:25pm
"Murphy/Jolly"... Sounds like an Irish Carnival "Fun House"..... (There's not a rational brain cell between both of these political "posers". Don't WASTE your VOTES Folks.... Votes are far too valuable nowadays..!

Permalink Submitted by C Breeze on May 8, 2018 - 8:50am
Remember Folks,.... We're STILL IN THE PROCESS of "Draining The Swamp" ! ! ! (America will ONLY FULLY HEAL when "We The People" continue to "dust & clean the HOUSE" at EVERY "opportunity") ! CLEAN OUT the "walking dead", lest they turn us into "Flori-fornia" (where streets become "toilets" & sidewalks become "closets" & cities are transformed into miscreant "Sanctuaries"...) REMEMBER your kids and grandkids; THEY can't do it,.. YOU must do it FOR THEM ! ! !