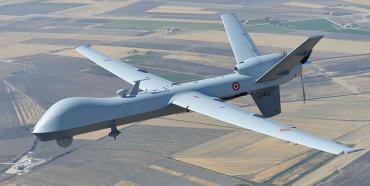 The U.S. Air Force announced on Tuesday that Tyndall Air Force Base in Northwest Florida will host the new MQ-9 Reaper Wing as 24 drones will be based there starting in 2022 though airmen could be there as early as 2020.

The wing will also contain an operations group, including mission control,  maintenance and launch and recovery efforts and will include more than 1,600 airmen. Tyndall beat out locations in California and South Carolina to host the wing.

"We selected Tyndall Air Force Base because it was the best location to meet the unique requirements of the MQ-9 Reaper," U.S. Air Force Sec. Heather Wilson said on Tuesday.

Wilson listed out the advantages of basing the wing at Tyndall including weather and a less crowded air space.

"Remotely Piloted Aircraft and the intelligence capabilities supporting them remain vital to our national security and the security of our allies," Goldfein said. “Equally important is the increasing use of RPAs in defense of the homeland and response to humanitarian disaster as we have seen recently with hurricanes and wildfires. Co-locating this wing with [U.S. Northern Command’s] Air Operations Center and 1st Air Force will bring increased capability to support Gen. Lori Robinson in addition to increasing lethality and giving our other combatant commanders the best trained operators possible."

Back in January, U.S. Sen. Marco Rubio, R-Fla., urged the Air Force to base the wing in Florida and he was happy to hear it would be.

“I have long advocated for the Air Force to base the MQ-9 Reaper unmanned aircraft in Florida, so I am very pleased it decided to do so,” Rubio said. “We look forward to welcoming 24 new aircraft and the more than 1600 airmen and their families who will soon call the Florida panhandle area home. Florida’s military community plays a vital role in defending our nation, and the Reaper system is a key component of the Air Force’s global intelligence, surveillance, and reconnaissance missions.”

WEAR TV reported that Wilson called U.S. Sen. Bill Nelson, D-Fla., to give him the news on Tuesday.

“This is a big win not only for Panama City, but for the entire state of Florida,” Nelson said. “The 1,400 airmen and their families that will soon be heading to the area will provide a tremendous boost to the local economy.”

U.S. Rep. Neal Dunn, R-Fla., had also been encouraging the Air Force to base the wing at Tyndall and met with  General Mike Holmes, Commander of Air Combat Command, and writing Wilson on the matter.

“The Air Force’s decision is a wise one for our national defense, and it will bring a tremendous boost to our region,” Dunn said. “Tyndall is a perfect location for this new wing, and this community will welcome the new airmen and their families who come to live and work here with open arms.”

Dunn thanked the Air Force’s leadership and local leaders for helping bring the wing to Tyndall.

“Tom Neubauer, Glen McDonald, the Bay Defense Alliance, and the entire coalition of military and civilian leaders are owed a great debt of gratitude,” Dunn said. “I thank them for their brilliant efforts on behalf of our region, which will see significant benefits from this basing decision for many years to come. I also wish to thank the Air Force for embarking on a fair, thorough review process that identified the best base to host this new wing.”

The MQ-9 has a range of 1,000 nautical miles and can be armed with various weapons including AGM-114 Hellfire missiles, GBU-12 Paveway II and GBU-38 Joint Direct Attack Munitions.

Mayport Selected as Home Base for Triton Drone Squadron