Thursday morning Michael Ertel was secretary of state, testifying before a legislative committee on election litigation; on Thursday afternoon he was the former secretary, his title and new position gone.

He was in office for less than a month.

"I am submitting my resignation as Florida secretary of state effective immediately. It has been an honor to serve you and the voters of Florida," he wrote in a succinct letter to Gov. Ron DeSantis. 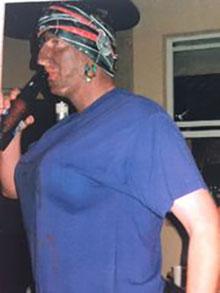 Ertel, 49, had resigned, perhaps at the governor's urging, after photos from a 14-year-old Halloween Party emerged showing the former Seminole County elections supervisor in a less-than-sensitive costume. He was dressed as an African-American woman wearing blackface and red lipstick, earrings and a New Orleans Saints bandana, with falsies under a purple T-shirt that had the words "Katrina victim" written on it.

The Tallahassee Democrat, the media outlet that broke the story, said Ertel identified himself when the newspaper showed him the photos. The Democrat wrote that it shared the photos Thursday with the Governor's Office, which was seeing them for the first time.

DeSantis accepted the resignation without an argument. He told reporters it was best for Ertel to make a quick, clean break, saying, "I want people who can lead and not have any of these things swirling around." 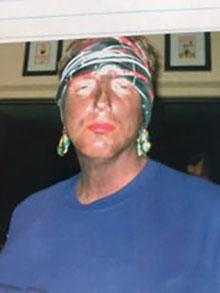 DeSantis did not explain why the photos were not caught during vetting, before Dec. 28, 2018, when Ertel was appointed.

Ertel could not be reached for comment Thursday afternoon.

He was first appointed as Seminole County supervisor by then-Gov. Jeb Bush and then was elected by the voters four times. He replaced Secretary of State Ken Detzner who was paid $142,000 a year.

Ertel had become quickly immersed in moving forward with Amendment 4, the ballot measure passed in November that will automatically restore the voting rights of most felons after they have fulfilled their sentences.

Ertel, who grew up in Seminole County, served eight years with the U.S. Army. His service included a stint as a public-affairs representative, and he was part of Operation Able Sentry in which the Army set up a base in Macedonia to monitor sanctions against Serbia.

After the 2012 presidential election, in which Florida was criticized nationally for long lines and other issues that caused irritation for voters, Ertel defended how the election was conducted.

"We had a good election statewide in Florida; we have to remember this," Ertel told members of the Senate Ethics and Elections Committee in January 2013. As to late-night jokes at the expense of the state, Ertel added, "I don't care what Jay Leno thinks. I care what Florida voters think."

In July 2017, Ertel took to Twitter as privacy concerns mounted about data breaches and identity theft in response to a special commission created by President Donald Trump that sought voter information -- including dates of birth, party affiliation, and the last four digits of Social Security numbers.

Costume was hilarious and

Permalink Submitted by Dave Manning on January 25, 2019 - 9:27pm
Costume was hilarious and funny. Who lives in a below sea level ghetto and doesn't evacuate when a Cat 5 hurricane rolls in? Who? The perpetual victim class in the U.S. The ones with the 80 point IQ average. Genes matter.

Permalink Submitted by JoAnne Morrissey on January 25, 2019 - 10:29am
I know what it is like to have 12 ft of water in my Wayne NJ home in 1968-Shocked to see it is still standing and when this happened there had been no records to be found that this could happen. Moved to Fl 1980's and worked in banking retired the end of 1998. Nothing changes and when those are Brave enough to try and correct the wrongs they are brutally treated and includes their family. I voted for DeSantis & Trump because Bravery is importants to a person who lost their Fathers in WWII on Foreign Soil.

Permalink Submitted by RGB on January 25, 2019 - 8:36am
Unfortunate application of new standards to old situations and no belief that a person could learn and change.

Although that was then and

Permalink Submitted by boc on January 25, 2019 - 6:36am
Although that was then and this is now, satire which reflects on sensitive racial or cultural content has a new litmus test, zero tolerance. Folks should think about this before doing anything that is liable to be captured and preserved and surface at a much later time. In today's world you are accountable for the sins of your past no mater what the vintage of it. The court of public opinion made this an easy end result.

I call BS! Look at what the

Permalink Submitted by ReelEstate on January 25, 2019 - 6:08am
I call BS! Look at what the Clintons did with their Halloween choice of dress! Yup, she gets to be first lady & a senator and slick willey president! Democrats can and do all sorts of disgusting things with no repercussions!

Permalink Submitted by JohnDome on January 24, 2019 - 8:16pm
Please remember this, "Nothing good ever comes from a Halloween party or an April Fool's joke".

What BS!He dressed up for a

Cross-dressing as a black

Permalink Submitted by Jim Spring on January 24, 2019 - 6:44pm
Cross-dressing as a black woman "Hurricane Katrina victim" in blackface 14 years ago was enough for Secretary of State Mike Ertel to get the ax from Governor DeSantis in a forced resignation. Maybe DeSantis will appoint a black Supreme Court Justice. Yeah , sure.

I could easily forgive the

Permalink Submitted by SandraW on January 24, 2019 - 6:43pm
I could easily forgive the blackface, but the hit on hurricane victims, nope! He did the right thing resigning.

I give you credit. At least

Considering the things the

Permalink Submitted by Robert on January 24, 2019 - 6:16pm
Considering the things the Democratic Socialists have been getting away with and not losing their jobs he should have gotten a pass! Just apologize for his poor judgement 14 years ago. He is so qualified he should have stayed!

Picture wrong on many fronts.

Permalink Submitted by Anonymous on January 24, 2019 - 6:03pm
Picture wrong on many fronts.. folks need to held accountable for their actions past and present Feel for him and his family but more so for those he made fun of. Katrina was no joke.."Your doing a great job Brownie" not the reality of that storm and those who died and suffered from it.