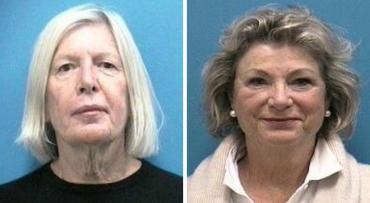 Heard was indicted and booked on two criminal counts of violating public records laws, according to the Martin County Sheriff's Office. She was released on her own recognizance after her fingerprints and mug shot were taken.

Her charges are criminal misdemeanors that could lead to a fine and/or jail time if she's found guilty. She also could be removed from office by the governor.

Thursday's charges were in addition to a previous non-criminal infraction filed by the prosecutor Nov. 27 for not responding to a public records request in January 2013, to which she pleaded not guilty.

A hearing date was set for Feb. 19. The state prosecutor informed Heard's attorney, Barbara Kibbey Wagner, during a December court hearing that five days needed to be set aside for the hearing due to the case's complexity.

Officials close to the case, however, anticipate the additional misdemeanor charges will result in a request for a hearing continuance. Heard also may now ask for a jury trial, if she pleads not guilty.

Heard is up for re-election in August for the District 4 County Commission seat; however, she has not yet filed, according to Martin County Elections Office records.

Former commissioner Scott, of Jupiter Island, also was charged Thursday with two additional criminal misdemeanor counts of violating public records laws. She, too, was booked and released on her own recognizance, according to the Martin County Sheriff's Office.

Scott pleaded not guilty to the two previous criminal misdemeanor charges filed Nov. 27 for public records violations, and a trial date was set for December 2018.

The arbitrator, Howard Googe of Stuart, ruled Feb. 8 that the actions of Martin County Commissioners Heard, Ed Fielding and former commissioner Scott violated public records laws by not turning over or preserving their email correspondence from and to former commissioner Maggy Hurchalla regarding the Lake Point mining and water restoration project, among other findings. The emails are public records, which state law requires to be preserved and protected.

Upheld by the circuit court, the county was ordered to pay Lake Point's attorney fees and costs of $502,000.

Lake Point alleges that Hurchalla interfered with its agreements with the South Florida Water Management District and Martin County. SFWMD and the county both recently settled through mediation Lake Point's lawsuit for breaching their 2008 agreements.

Lake Point attorney Ethan Loeb said in court testimony that the Hurchalla emails from the personal email accounts of Heard, Scott and Fielding were relevant to Lake Point's civil lawsuit against Hurchalla for allegedly interfering in their agreements with the county and SFWMD.

Heard was a commissioner when the agreements were approved unanimously by the Martin County Commission in 2008.

Hurchalla's attorney, Virginia Sherlock, claims Lake Point's lawsuit is a SLAPP suit (Strategic Lawsuit Against Public Participation); however, she sought dismissal four times on those grounds before three different judges, all of whom denied her motion.

Hurchalla and Lake Point will meet in Circuit Court Judge William Roby's courtroom Feb. 5 at the Martin County Courthouse to argue their cases before a jury.

Fielding also was charged Nov. 27 with two criminal misdemeanors for violating public records laws. He received no additional indictments Thursday, according to the sheriff's office. He pleaded not guilty to the charges in December 2017, and his trial was set for December 2018.

Barbara Clowdus is editor and publisher of Martin County Currents. This story is reprinted from a posting Thursday on Currents' Facebook page.

The commissioner needs to go

Permalink Submitted by greg bucolo on January 17, 2018 - 11:49am
The commissioner needs to go also

The commissioners need to pay

Permalink Submitted by Glen Gibellina on January 6, 2018 - 8:15am
The commissioners need to pay for the legal bills out of their own pockets instead of the taxpayer's money Arrogant basters not fit for office

they broke the law they pay

"Wring it out" in Court;

Permalink Submitted by C Breeze on January 6, 2018 - 8:06am
"Wring it out" in Court; where lessons are given on "How to be a respected (and honorable) 'public servant'.."

Where does Donna Meltzer fit

Permalink Submitted by Ed Vossen on January 6, 2018 - 6:58am
Where does Donna Meltzer fit into this scenario?

This type of behavior should

Permalink Submitted by Fae on January 5, 2018 - 3:29pm
This type of behavior should not go unpunished in Martin County; this behavior been happening for years from all levels, they all need to be investigated. Living in a society where they always talking about equal rights, equal rights been out the door long time ago, when judge's, attorneys, police officer's and commissioners use there authority to make money for there own personal gain. Why should they get a pat on there hand's and walk away free why others that sit in Martin County Jail with no probable cause and no evidence then they have you sitting for three years with out any representative which is against the law so where equal rights and proving innocent the same people who created the system is the same ones don't follow any of the laws, but judgment day is coming.

It has been very prevalent

Permalink Submitted by Daniel on January 5, 2018 - 10:12pm
It has been very prevalent over the last few decades, and the governor would likely do something like remove them, but the commissioners know that it is very unlikely that the governor will remove them simply because he would need to remove about 50% around Florida if he started removing them. Way too many renegades. Look at Panama City Beach's city commission. Terrible commissioners indeed!!

I'm pretty sure you meant

The arrogance and pomposity

Permalink Submitted by BocaBoomer on January 5, 2018 - 2:23pm
The arrogance and pomposity these Commissioners have shown,is not only contemptible but constitutes malfeasance in office. The stench that permeates Martin County is the political cesspool these morons created themselves and taking responsibility is not the focus as much as being held accountable to the public trust they willfully violated. Lock them up even if it can only be less than a year for misdemeanors. Time to tell these swamp-dwellers the citizenry will no longer tolerate such disrespectful behavior from elected officials. Lock 'em up!!

The real culprit here is the

Permalink Submitted by Alex Knight on January 5, 2018 - 2:14pm
The real culprit here is the three county commissioners who felt they did not have to abide by the public records laws and ultimately cost Martin County taxpayers millions of dollars. Eric is correct, Sarah and Ed need to resign and end this embarrassment.

The real culprit here is the

Permalink Submitted by Kelly L Aldrich on January 5, 2018 - 11:15am
The real culprit here is the attorneys targeting deep pockets. Look at the number of cases and the settlement sizes simply because of highly overcompensated attorneys ability to drag out cases in order to make it much cheaper just to settle rather than fight for what is right. When the public finally realizes that nearly every dollar paid out in these ridiculous cases comes out of their pocket perhaps they will demand the attorney costs be cut drastically, and the disgusting, advertizing be stopped. Kelly L Aldrich Stuart Fl

It is time for Sarah and Ed

Permalink Submitted by Eric on January 5, 2018 - 9:58am
It is time for Sarah and Ed to do the right thing and step down. We should expect more from our elected officials.

This county and its

Permalink Submitted by Anonymous on January 17, 2018 - 11:46am
This county and its government needs to be changed. These people are making to much money. the county is broke and they keep giving each other raises and perks .Look up how many county employees are making over 100,000 dollars. It will make you sick. It time to get rid of worthless employees doing nothing but to look for ways to raise your taxes. I know I was there.