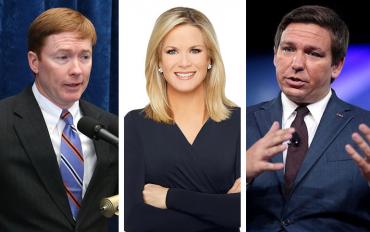 On Thursday night, at a Republican Party of Florida (RPOF) event in Orlando, U.S. Rep. Ron DeSantis, R-Fla., and state Agriculture Commissioner Adam Putnam will square off in this year’s first debate between the GOP gubernatorial hopefuls.

Martha MacCallum from FOX News will be moderating the event and Sunshine State News asked her some questions as she readied for Thursday night.

MacCallum currently serves as the anchor of “The Story with Martha MacCallum” which runs weeknights at 7PM/ET. She joined FOX News Channel (FNC) in January 2004 and is based in New York.  She previously anchored The First 100 Days, which chronicled the beginning of President Donald Trump’s administration and, prior to joining the primetime lineup, she served as co-anchor of America’s Newsroom alongside Bill Hemmer from 2010 to 2017. Before FNC, MacCallum held a variety of positions at NBC from 1997 to 2003. She was co-anchor of CNBC’s Morning Call with Martha MacCallum and Ted David and was the anchor of CNBC’s Checkpoint, an evening news program focusing on the war against terror and the Iraq war. A frequent contributor to MSNBC’s The News with Brian Williams, NBC’s Today, NBC affiliates and CNBC World, MacCallum also created the series Inside the Business for Business Center. In 1997 and 2003, MacCallum was the recipient of the American Women in Radio and Television award for her reporting. Before joining CNBC, MacCallum was an anchor and reporter for WBIS-TV (ION-31), a sports and business network in New York in 1996. Prior to that, she was a business correspondent at Wall Street Journal Television where she anchored The Wall Street Journal Report, World Market Outlook and Business USA from 1991-1996. She began her career as a reporter for Corporate Finance magazine. MacCallum earned a B.A. in political science from St. Lawrence University.

SSN: Most polls show just under half of Florida Republicans remain undecided on the gubernatorial primary. Is the Bill Nelson-Rick Scott Senate race simply overshadowing it or are there other factors in play?

MM: I think on a national level you get a lot of attention on the Senate race and Rick Scott is someone who has been in the spotlight given so many of the difficult events that have happened in Florida over the last years – the hurricanes and the terrible shootings. Overall, I think that is a more high-profile national race that people are watching. Obviously, the Senate races are potentially pivotal for the Senate chamber and that makes them very pivotal. However, I think these governor races are increasingly interesting for people across the country and Florida is such a bellwether state and it is the state that opened everyone’s eyes on election night when President Trump won those 29 electoral votes in Florida – everybody went oh, maybe this is not going to go the way that everybody thinks it’s going to go. So, it makes Florida’s gubernatorial, Senate race everything – just a fascinating microcosm of America to watch.

SSN:  How much should Putnam and DeSantis focus on those undecided Republicans in the debate on Thursday night?

MM: If they want to win, they are going to have to put a lot of focus on those undecided Republican voters. I think it’s natural that in primary races not everybody follows them as closely. They wait until the candidate is out front and it’s a head-to-head against a Democrat. But people who care about the future of Florida should be paying very close attention to this primary and the choices that they’re making and I think that they’re going to all tune-in and do that on Thursday night.

SSN: With this being the first debate between the two candidates, how aggressive do you think they will be? Are you expecting them to go after each other?

SSN: So far, nobody has broken out of the pack in the Democratic primary. Do you expect Putnam and DeSantis to take aim at the Democrats in the race or just go after the Democrats as a whole?

MM: It is a very crowded Democratic race but one of the things that we’re going to aim to drill down on on Thursday night is how they would run against the Democrat. Ultimately that’s what they’re going to have to deal with and I think Democrats believe that there’s some vulnerability in some counties that voted for President Trump last time around, especially where health-care is concerned. I think they believe that there’s some soft ground where people are not as happy as they might have been when they first voted in the presidential election. I think they better sharpen their arguments against any Democrat that they’re up against. We will be asking them about that come Thursday.

SSN: Do you think the two Republicans will focus on the issues on Thursday night or spend more time introducing themselves to the voters?

MM: I think we’re going to focus on the issues. I think that people do need to get to know them but I think the best way for people to get to know them is by listening to their answers to some pretty pointed questions and we’ve been working hard to make sure that our questions are pointed and focused and really force them to step up and show the contrast that it is between them.

SSN:  How much do expect Putnam and DeSantis to focus on the economy? While neither has Rick Scott’s endorsement, will either candidate try to make a play for his supporters by embracing his record on jobs?

MM: Well clearly there’s been steady growth in Florida GDP over the last several years. Florida is in very good shape. Florida is the number one tourist destination in the country. They have a lot of economic growth which is a very good story and I think that they’re both going to try to align themselves with continuing that growth in the future. It is going to be interesting to see what Rick Scott does in this process moving forward. He’s hanging back right now – the president has not hung back. The president is endorsing Ron DeSantis who in our most recent poll is down by 16 points. That being said, there’s a lot of Republicans who are undecided and it’s an open race for whichever one of them emerges as stronger on Thursday night. And we’ve seen when we did the West Virginia race these debates make a difference in people’s understanding of the candidates and the numbers tend to move right after.

Permalink Submitted by Momof4 on June 28, 2018 - 10:09am
Martha referred to Congressman DeSantis as “General” in her preinterview last night. This is completely false. He was in the Navy as a JAG lawyer. I hope we can expect a fair and honest debate from FOX even though DeSantis is their darling and the news network is completely responsible for his name recognition as they interview him regarding Trump issues myriad times each week. Very unfair

'Faux News' is the 'Pravda'

An endorsement by Trump right

Permalink Submitted by say it on June 28, 2018 - 9:25am
An endorsement by Trump right now is the kiss of death... 16% pts. down means it is basically over, problem is Putnam has had so much controversy lately with Guns, Mosaic spills, algae blooms, etc. etc. He is an easy target against the Dems. One thing is for sure, it is going to be interesting this year in politics

Permalink Submitted by Ocean Joe on June 28, 2018 - 9:23am
A gruesome twosome. Trump robot vs. career politician.

I saw that last night

Permalink Submitted by Tom Robinson on June 28, 2018 - 9:10am
I saw that last night After using most of her segment on Putman, She basically said, “Oh yeah. Ron is running too”.

DeSantis for Governor, and

Permalink Submitted by C Breeze on June 28, 2018 - 8:38am
DeSantis for Governor, and Putnam for Lt. Governor: From 'there' it is only "UPHILL" for BOTH of them over the next decade in a political atmosphere that is unstoppable for conservative values... and "dinosaur death-like" for unchecked Liberal socialism with its accordant media complicity.

Ask Putnam how much waste he

Permalink Submitted by RepublicanConscience on June 28, 2018 - 6:33am
Ask Putnam how much waste he cut from his budget during his tenure?