Marco Rubio in Puerto Rico: 'This Is a Crisis' 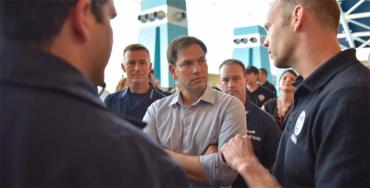 The Florida Republican met with Puerto Rican officials Monday, including the country’s governor, Ricardo Rossello, and U.S. Rep. Jennifer Gonzalez, to discuss ways the federal government could help the country recover after being devastated by Hurricane Maria.

Rubio has been an outspoken advocate for Puerto Rico’s recovery efforts in recent weeks.

The state’s junior senator has spread the word about what American citizens can do to help their Puerto Rican neighbors, posting links to charity fundraising pages on his social media networks in recent weeks.

Rubio said federal response to the storm should be no different than it was in Texas or in Florida for Hurricanes Irma and Harvey, which struck the two states in the span of just a few weeks, prompting large amounts of federal assistance to help with cleanup efforts.

“[The goal should be] to rebuild Puerto Rico stronger than ever,” Rubio said at a bilingual press conference Monday afternoon. “These aren’t normal times. This is a crisis.”

Rubio also teamed up with fellow Florida U.S. Sen. Bill Nelson to pen a letter to President Donald Trump and Attorney General Jeff Sessions, asking the two men for federal assistance to help Puerto Rico get back on its feet following the storm.

“It is important that the federal government stands ready to assist in the difficult days after Hurricane Maria passes, when hope must be available to combat despair,” Rubio and Nelson wrote. “Because of your foresight, our family, friends, and neighbors in Puerto Rico and the U.S. Virgin Islands will emerge from yet another major hurricane this month ready to rebuild and recover. However, as even the best laid plans can be overwhelmed by natural forces, we urge your administration’s continued attention to this dangerous storm so that appropriate federal resources can quickly be made available as locally unmet needs arise.”

Puerto Rican lawmakers thanked Rubio for stepping in to assist those in need following Hurricane Maria. 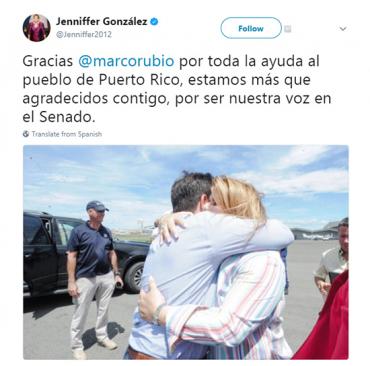 “Thank you Marco Rubio for all the help to the people of Puerto Rico, so grateful to you for being our voice in the Senate,” U.S. Rep. Jennifer Gonzalez tweeted alongside a photo of a warm embrace between the two Monday morning.

Puerto Rico will need all the help it can get -- Maria was the worst storm to strike Puerto Rico since 1928.

The island was woefully unprepared for the havoc of Hurricane Maria, a Category 4 storm which knocked out power for the entire island and caused widespread damage from debris and rubble whipped up during the storm.

Puerto Rico had already been ravaged by Hurricane Irma, another monster storm which sped through the Caribbean island before making landfall in the Sunshine State earlier this month.

Approximately 80,000 people were already without power by the time Maria and the country’s power company, Puerto Rico Electric Power Authority (PREPA), has been riddled with financial difficulties, struggling with increasing debt which reached $9 billion before either Irma or Maria hit.

Rubio and Nelson asked for expanded assistance in Puerto Rico to monitor any illegal activity related to the hurricane.

“As the National Center for Disaster Fraud continues its important work with the U.S. attorneys’ offices and other federal, state, and local agencies related to Hurricane Irma,” they wrote. “We respectfully urge you to expand the scope of the task force in Puerto Rico to account for any illegal activity related to Hurricane Maria.”

This is a developing story. Check back for updates.