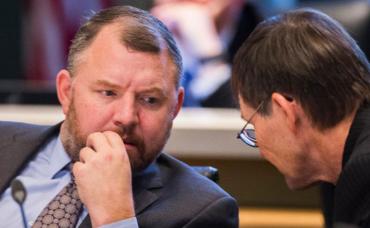 A legislative panel agreed Thursday to boost the budget of the state Office of Medical Marijuana Use by $13.29 million to help pay for issuing new licenses and covering the costs of ongoing litigation.

The office, which is part of the Department of Health, estimates each application will cost $18,354 to process. The office has already approved 14 licenses, with the four new licenses triggered by a provision in state law that allows an increase when the patient registry exceeds 100,000 people.

Lawmakers also approved $1.5 million to pay for ongoing lawsuits against the Office of Medical Marijuana Use. Courtney Coppola, deputy director of the office, said the agency is currently facing 11 lawsuits, and she estimated the office has had “nearly double” that number since 2015.

Another $3.4 million approved by lawmakers will help develop a computer software system to track the distribution of medical marijuana “from seed to sale.”

The 24-hour, statewide tracking system is required by law, with Coppola saying the office is relying on data from the individual “medical marijuana treatment centers,” which are licensed to grow, process and sell cannabis. She said the new system will provide a uniform means of monitoring the distribution system.

The budget adjustment also included $1.67 million to pay Veritec Solutions for providing patient identification cards and for operating a call center. Another $305,000 will be used to upgrade the patient registry system.

The funding boost came less than a month after the start of the 2018-2019 fiscal year and after lawmakers only included $935,400 for the Office of Medical Marijuana Use in the state budget. The overall total costs approved Thursday were about $14.2 million, which combines the $935,400 in the budget with the $13.29 million increase.

The need for additional money also reflects controversy and criticism that Gov. Rick Scott’s administration has not moved quickly enough to implement a medical-marijuana program, which got its start in 2014 when lawmakers legalized non-euphoric cannabis.

The debate intensified in 2016, when voters approved a constitutional amendment that broadly legalized medical marijuana. The Legislature passed a law in 2017 to carry out the amendment and dealt with issues such as increasing the number of licenses for medical-marijuana operators.

“I think many of us, on a bipartisan basis, are frustrated by the pace that the law has been implemented,” Bradley said. “The law itself works and is a solid piece of legislation. The implementation has not proceeded as quickly as many of us would like.”

House Minority Leader Janet Cruz, D-Tampa, questioned why many of the costs raised in the special budget-amendment process were not part of the Office of Medical Marijuana Use’s budget request during the regular 2018 session.

She said most of the costs were known “or anticipated for quite a while,” including payments to companies that had contracts with the agency.

“Why are we using a process that is essentially meant for fixing mistakes and dealing with, I guess, what we would call surprises, to fund the implementation of a constitutional amendment that 71 percent of Florida voters approved almost two years ago?” Cruz asked.

Permalink Submitted by Dean Franklin on July 20, 2018 - 6:19pm
Scott and Bondi need to quit using our tax dollars to fight medical cannabis. If Scott's handprints blivet Bax had obeyed the Constitution and state law they wouldn't have needed the money. This is Republican's misspending our tax dollars. None of them should ever be allowed to hold elected or any office ever again

They tried the same over in

Permalink Submitted by Bill on July 21, 2018 - 12:46pm
They tried the same over in Oklahoma, but their state AG reminded them that they overstepped the law and the will of the people, https://newsok.com/article/5601852/state-board-of-health-to-discuss-repealing-medical-marijuana-rules-passed-last-week-after-ag-says-they-overstepped

Permalink Submitted by Claude Kirk on July 20, 2018 - 6:00am
Y'all grossly underestimated the states ability to make money on this "weed" legislation. You just will spend more than you take in as long as it's just for the "really sick" among us like John Morgan's sad tear-jerker story about his brother that got the "weed" ball rolling out of control in Florida. The only way you turn a positive money making revenue for the State is by opening up recreational sales. But then you have the liability of Floridians getting fat and lazy on the "weed" filling up your welfare programs because they wont work any longer and gate-waying on to meth-coke-opioids...whatever to ramp up their buzz. And by God don't forget the increased crime they must engage in to pay for all that meth-coke-opioids...whatever is next to sustain that buzz. And finally y'all are gonna be on the hook big-time paying to save them from overdoses and trying to get them off their addictions. Lawmakers of Florida...are you stupid...yes you are!!!

It is fortunate that most

Permalink Submitted by Claude's Dead on July 20, 2018 - 10:17am
It is fortunate that most people involved in this issue are not as ill informed as you are...

Permalink Submitted by Bill on July 20, 2018 - 8:51am
You must be one of the 29%, you are either very uninformed or you you are making a living by keeping marijuana illegal.