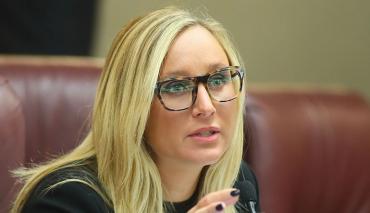 Sen. Lauren Book, one of the Legislature's most credible spokeswomen on what a victim of sexual misconduct experiences when she finally decides to go public submitted a Senate Rules complaint Tuesday against Sen. Jack Latvala.

It's a powerful knife in the heart of the Clearwater Republican's hopes to clear his name as a sexual predator. It could give courage to others of the six women who reported Latvala stories anonymously to come forward and identify themselves.

Book, D-Plantation, was sexually abused and tortured by a nanny at age 11, and since 2007 has been leader of a crusade against the sexual abuse of children, appealing to them not to stay silent but to tell somebody.

Book, 32 and still in her first Senate term, is the daughter of powerful lobbyist Ron Book. Over the years the two Books have together persuaded the Legislature to contribute millions of dollars to the crusade. Lauren's Kids is by far the Legislature's favorite charitable depository.

The young senator can play a key role in the outcome of Latvala's case.

This is the statement Book issued Tuesday:

"Today, I filed a formal complaint with Senate Rules Chair Lizbeth Benacquisto regarding Senator Latvala’s conduct in the wake of sexual misconduct allegations against him. This was a difficult decision, as I have truly admired and respected Senator Latvala for many years. However, after great thought and deliberation, I knew this was the right thing to do for myself, for Ms. (Rachel) Perrin Rogers, and for all others who may wish to come forward on this or other such grounds. While the Senator is entitled to a fair hearing and has a right to defend himself during the normal course of the investigation, it is not ever ok to make attempts to “out” a complainant, or to publicly attack or shame them with character assassination –- things Senator Latvala has unfortunately and clearly done through various media outlets.

"This behavior is unbecoming of a sitting Senator, unfair to Ms. Perrin Rogers, and discouraging to others who may have wished to come forward and may not now do so for fear that “they too” will be publicly shamed, or even jeopardize their employment. As Senators, we wanted to bring about systemic change as a result of the complaints and discussion that has taken place on how we treat women in and outside of the process. As leaders, we must lead by example, but what has happened here is not bringing about change at all. As such, I submitted this complaint under Senate Rule 1.43 - Violations; Investigations, Penalties, asserting specific violations under Senate Rules 1.38 and 1.35 related to Senator Latvala’s conduct. The precedent we set today will live on, and we must –- each and every one of us -– look inside ourselves and find the courage to “be brave,” as Senator Benacquisto and I previously urged victims, and do what is right.

"As uncomfortable as all this may be for myself and my colleagues, I know it pales in comparison to what victims of sexual misconduct endure when they choose to come forward with a report. While it will never be easy to come forward, we must always make it safe to tell, and to do all we can to protect those who may have been victimized. The investigation will yield truth into the matter at hand, but in the meantime, we must hold ourselves, and the process, to the highest ethical standard and refuse to allow the kind of behavior and mistreatment we have seen in the wake of the allegations."

In an Oct. 30 joint statement, Book and Benacquisto (also a rape victim) vowed to stand with victims: “As long as we are here, you will be heard, and we will do all that we can to help. We are your allies because, sadly, we can both say #MeToo.”

By her statement Tuesday, Book is showing, not just telling.

I said in a Dec. 1 column Florida women need their state senators to act like leaders if the toxic culture in state government is going to change, if any of the other women who told their Latvala stories to Politico are going to come forward.

Book, with such a powerful story of her own to tell, clearly has done that. She has proclaimed herself a leader. She deserves our admiration and thanks.

Stop child abuse so that a

Permalink Submitted by Anonymous on February 1, 2018 - 7:14am
Stop child abuse so that a decade later we do not need another metoo twitter wave. Give child custody 50-50 and if the child reports sexual abuse a jury to decide not a judge. No more child support for sole custody and this will remove attorneys from charging excessive fees and playing with constitutional parental rights. Also remove all Psycologist and evaluations. Divorce and child custody doesn't make a parent misfit and crazy. It is the lawyer or narcissus parents greed for child support and control that causes children to be abused and taken away from the love and care of the other parent who is removed for pecuniary gains. Judges are bribed and paid for favorable orders in contested cases. Remove family courts, CPS and control the fees that any attorney can charge the parents with a year to close entire family divorce and custody if without abuse. No more centers and Psycologist to extort money that should be used for the children and further stop destruction of families via attorneys, judges,CPS.

Me too needs that family

Permalink Submitted by Anonymous on February 1, 2018 - 7:04am
Me too needs that family courts get abolished. Children are being placed with abusers and judges discretion. Abused children are drugged once removed from protective parent with pyloric drugs to cover up and stop abusing further. All the cover up is done under secrecy and best interest of the children by judges through out the US. Reopen cases from last 10 years of child custody and you will realize how these minor children are being sold for pornography, sexual abuse by the elite in this county. Judges need to go and jury needs to be from conman people. Remove attorneys who lie from practice and impeach and bar them from practicing law. This will clean our judiciary and impose faith of the common man.

Permalink Submitted by Stop child abuse on February 1, 2018 - 6:57am
Take away judicial immunity from family judges and jury trial. Also restrict attorneys from charging for divorce and family issues excessive fees. Attorney's thrive at the cost of family distraction. They get attorney fees ordered from these judges who are themselves lawyers for life long payments and push parents to bankruptcies. Poor parents can't protect children. CPS is corrupt and cover up to help the abuser. The whole system is rotten.

Child abuse is rampant in the

Permalink Submitted by Anonymous on February 1, 2018 - 6:51am
Child abuse is rampant in the United States. Children are abused and victimized in family courts. Protective parents are removed and children are placed by judges covering up abuse in secrecy with their abusive parent. Children are also sold to foster care, removed from their families. Stop Child Abuse.

Permalink Submitted by Richard Paul De... on December 7, 2017 - 10:17pm
Unfortunately, the voters JUST want those elected to do something positive. On a national level we know the issue currently; but what about the fact that the National Debt (even the annual USA debt is out of control) Government shut down is delayed 22 days, but why do both political parties solve the unbalanced budget. First we must REPEAL Florida Chapter 106 and determine that anyone that wants their name on the ballot should be allowed to have it on the ballot at no cost; always allowing Republicans to be listed at the top of all Florida ballots is unfair; naming independent voters as NPA must stop.....then after these issues ....finally do something about political leaders who simply go to Tallahassee and do absolutely nothing. my opinion. Richard 386 314 3646 cell; email me with your opinions and views onballot@gmail.com onballot.com whocareshalloffame.com thanks

Permalink Submitted by Tampaguy on December 6, 2017 - 12:45pm
"RULES? I don't need no stinking Rules!" -Latvala. Seriously people - Latvala has had his day in the Sunshine - he should step down, live a great life, and study Yoga and Pottery Making. Sooooooo tired of his crap.

Actions in the wake of the

Permalink Submitted by RGB on December 6, 2017 - 10:13am
Actions in the wake of the allegations. Will be confusing for some, but under the Senate Rules, there is a standard for behavior that must be met, whether the original allegations are true or false. Latvala needs to play by the rules IF he has been falsely accused. If he doesn't play by the rules casts a shadow on him.

This entire article could

Permalink Submitted by C Breeze on December 6, 2017 - 9:18am
This entire article could have been effectively "shortened" to THIS: "AS LONG AS WE ARE HERE, you will be heard, and we will do all that we can to help. We are your allies because, sadly, we can both say "Me Too". [ Apparently, "these" are "the new self-appointed Sheriffs in town"; but, still willing to 'act' without actual evidence towards prosecution (or even 'official deposition'); This kind of "political declaration" cries out for "specific term-limits" to ensure these "too focused new Sheriffs" don't "barricade themselves in office" indefinitely on this "one note song"; This has all the traits & sounds of a conjoined "feminist revival" attempt; Not necessarily dangerous (at this point), but seemingly ignorant of any of Bastiat's "Unforeseen Consequences" (typical of today's "political elitists" who offer "pie in the sky" with no ability to participate "long term", nor "share in the consequences" of their "ham-handed assurances"); "Optimism" is wonderful, but false hope based upon scant/lacking /no evidence is "cruel & unusual"; AND the very last thing a 'true victim' needs is "political pontification"....because THAT, in and of itself can (and will ) "bring down" innocents "thrown under the bus for the sake of "media drama & speculation". Politicians and Media Outlets no longer practice restraint in their day-to-day quests, and are "dangerous" to themselves...and others; As the old adage says: "Be careful lest you reap what you sow"............