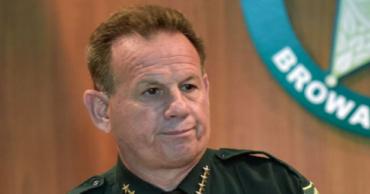 Siding with Gov. Ron DeSantis, a judge Thursday threw out a lawsuit filed by suspended Broward County Sheriff Scott Israel, finding the Republican governor acted within his authority when he removed the embattled law-enforcement official.

DeSantis suspended Israel shortly after taking office in January, accusing the sheriff of “neglect of duty” and “incompetence” related to two mass shootings in Broward County, including the February 2018 massacre at Marjory Stoneman Douglas High School.

Israel, a Democrat, appealed his suspension to the Florida Senate, which has the authority to reinstate or remove elected officials. But that appeal was put on hold when Israel asked a Broward County judge to weigh in on whether DeSantis lacked the power to strip the elected official of his post.

After the decision Thursday by Broward County Circuit Judge David Haimes to reject the lawsuit, DeSantis issued a statement that said he is “pleased that the court recognizes my authority as governor to suspend a public official for reasons of neglect of duty and incompetence, Now, I will ask the Senate to move forward with the process of the formal removal of Scott Israel. Broward County deserves professional law enforcement leadership that will safeguard the best interests of the community and work diligently for the protection of life.”

Israel’s lawyer, Benedict Kuehne, accused DeSantis of having “engineered a political power play” that interfered with the public’s right to determine their elected officials and Israel’s right to execute his duties of office.

“Simply put, the governor’s suspension specifications find Sheriff Israel at fault for the actions of others but does not ascribe any constitutional or statutory duty to him that was neglected or incompetently exercised,” Kuehne wrote in the 36-page petition.

But in the seven-page ruling, Haimes wrote that the court’s ability to override DeSantis’ decision was limited to whether the executive order suspending Israel names “one or more grounds” laid out in the Constitution and “is supported with alleged facts sufficient to constitute the grounds named for the suspension.”

DeSantis’ executive order set out 35 paragraphs of allegations, including neglect of duty and incompetence. If either of those grounds are supported by the alleged facts, then DeSantis “has met the jurisdictional threshold for Sheriff Israel’s suspension,” Haimes wrote.

In a document known as a “bill of particulars” filed in the Senate case, the governor accused Israel of being responsible for the deaths of 17 students and faculty members at Marjory Stoneman Douglas High School as well as five victims of a mass shooting at the Fort Lauderdale-Hollywood International Airport.

DeSantis’ executive order included “various factual allegations regarding failures in setting up of command centers, as well as failures regarding training and leadership,” Haimes wrote. The executive order also blamed Israel for a policy that said a deputy “may” enter the area where an active shooter is located. And the order accused Israel of failing to properly train his deputies.

“The court finds that the allegations set forth in Executive Order 19-14 are sufficient to support the specified grounds of neglect of duty and incompetence, and therefore, meet the jurisdictional requirements for suspension,” Haimes concluded.

Kuehne issued a statement Thursday that said the former sheriff was “disappointed” and intends to appeal the decision.

“While we value Judge Haimes’ studied decision, the constitutionality of Sheriff Israel’s suspension will be tested in Florida’s appellate courts. The governor’s overreach of the limited suspension authority has never before been used to replace a political opponent at the urging of the National Rifle Association,” the statement reads. “The governor’s disagreement with Sheriff Israel’s decisions is not a basis to remove him from office. Only the voters of Broward County, who overwhelmingly elected Scott Israel as sheriff, should have the authority to decide who is their elected sheriff.”

DeSantis faces a separate court test of his suspension authority. Suspended Okaloosa County Superintendent of Schools Mary Beth Jackson has asked the Florida Supreme Court to decide whether the governor had the power to remove her from office.

Less than a week after he was sworn into office, DeSantis suspended Jackson, citing “scathing” grand-jury reports that alleged “dereliction of duty.” Education Commissioner Richard Corcoran recommended that Jackson be stripped of her post.

Jackson appealed her suspension to the Florida Senate, which also put her case on hold after she turned to the Supreme Court. Jackson’s lawyer, George Levesque, is arguing that DeSantis lacked the authority to remove her from office, in part because the allegations against her pertain to events that occurred before her re-election in 2016.

The governor’s lawyer, Nicholas Primrose, maintains that the Senate --- and not the Supreme Court --- is the proper venue to determine whether DeSantis acted within his authority.

Permalink Submitted by C Breeze on April 5, 2019 - 2:08pm
"...the actions of others...", Eh, Mr. Kuehne??? That's your defense ?!? Guess you never heard of President Truman's motto: "The buck stops here.." Turn in your law degree Mr. K. And find a "Bar" to hang out in, that serves liquor... And on your way, stop at the library and look up the word "delegate" and then you might begin to understand how "leadership" is supposed to work...(throw in the word "responsibility" while you got the dictionary opened...). [There's always wills and house closings for the likes of you...]

Take out the trash. Inept

Permalink Submitted by colleena11 on April 5, 2019 - 1:50pm
Take out the trash. Inept and overpaid Israel needed to go! Bye bye!

DRAIN THE SWAMP!!! Many more

Permalink Submitted by Gs on April 5, 2019 - 11:50am
DRAIN THE SWAMP!!! Many more of these corrupt democrats need to be removed and indicted. #indictdebbiewasserman

Drain the swamp is totally

Permalink Submitted by Penny Richardson on April 5, 2019 - 12:12pm
Drain the swamp is totally correct. However, it doesn't matter which side of the fence you are on. If you are crooked, you have to go. After all, the US is a land of equal opportunity.

Permalink Submitted by VoteDem2020 on April 5, 2019 - 11:50am
In today's political arena, every ****-up needs a scapegoat. Spend time, effort, and money 'blaming' someone rather than actually SOLVING THE PROBLEM!

How bout doing both? Inept

Permalink Submitted by Colleena11 on April 5, 2019 - 1:51pm
How bout doing both? Inept public servants need to be put in notice!

Governor is correct to remove

Permalink Submitted by RWoodworth on April 5, 2019 - 11:29am
Governor is correct to remove both of these cowardly acts because they were responsible, just like Hillary Clinton was responsible for the deaths at Bengazie?

Glad to see someone was held

Permalink Submitted by Jimmy on April 5, 2019 - 10:42am
Glad to see someone was held accountable for the Atrocity in Broward other than the NRA and 18 year olds that want to buy a hunting rifle.