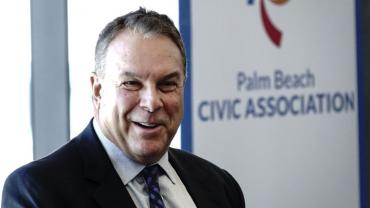 Palm Beach billionaire Jeff Greene jumped into the governor’s race as he gears up for a second bid for statewide office.

Greene filed his paperwork with the state to run for governor.

The billionaire candidate has an interesting past including aspects of modern celebrity and a Horatio Alger tale. Growing up in a middle class environment, Greene held some odd jobs, waiting tables at the Breakers and working for a traveling circus before making his fortune, which is well over $1 billion, in real estate. Greene added to his wealth by investing in credit default swaps, investing against sub-prime mortgages. Greene has also hobnobbed with celebrities including a tangled lawsuit against actor and director Ron Howard, having Hollywood madam Heidi Fleiss living on his property for a year and having controversial heavyweight great Mike Tyson as the best man at his wedding in 2008.

While he grew up in Florida as a Democrat, Greene drifted over to the Republican ranks during his time in grad school, going for his MBA at the Harvard Business School. Greene ran in the Republican primary for a congressional seat in California back in 1982 but was unsuccessful in winning the nomination. Since that time, he has returned to the Democrats. In 2010, Greene pulled 31 percent in the Democratic primary in a race for an open U.S. Senate seat but lost to then U.S. Rep. Kendrick Meeks, D-Fla., who took 57 percent.

Gillum weighed in on Greene getting in the race Monday morning and looked to contrast his background with the other candidates.

“I welcome Jeff Greene to this race to become Florida’s next governor,” Gillum said. “As the son of a construction worker and bus driver, and still the only non-millionaire Democrat in our primary, I believe Florida Democrats need a true champion for working people as their nominee. I look forward to continuing this contest of ideas with Jeff in the field.”

Permalink Submitted by independent on June 4, 2018 - 2:54pm
All I, and many like me are waiting for is the Murphy/Jolly ticket. Then we can really drain the swamp instead of just talking about it...

You and they have the right

Permalink Submitted by Ocean Joe on June 4, 2018 - 3:14pm
You and they have the right idea...but Murphy ran a weak race against Rubio and Jolly lost to Charlie Crist. You've got to win before you can drain anything. Apply the Sunshine Laws to all communications between office holders and lobbyists. Impose mandatory jail time and removal from office for violations.

I would hardly call losing by

Permalink Submitted by say it on June 5, 2018 - 9:47am
I would hardly call losing by single digit percentage points to a veteran incumbent in a Republican stronghold as a weak race, same for Jolly in an area that is 87% Dem. Aside from that, I'm not concerned about the past, but the bi-partisan work they are trying to do for the future. It is in a word, refreshing for a change...

Permalink Submitted by Huh? on June 4, 2018 - 2:50pm
Love Gillum's comments about being the only non-millionaire running for Gov. He is also likely the only one still under investigation by the FBI for corruption, illegal trips and campaign contributions, besides Trump of course...

The Democratic Party is as

Permalink Submitted by IKIA on June 4, 2018 - 11:35am
The Democratic Party is as bad at finding suitable candidates for political offices in Florida as was the Republican Party in allowing Herr Drumpf to become their nominee for president in 2016!

The Liberals ALL want to jump

Permalink Submitted by Tampaguy on June 4, 2018 - 11:31am
The Liberals ALL want to jump on the bandwagon for Governor. How nice Greene made his money through what seems to be "the bad fortunes of others (land spec)". I'm sticking with a REAL FLORIDA GUY --- Adam Putnam.

The Liberals ALL want to jump

Permalink Submitted by Tampaguy on June 4, 2018 - 11:31am
The Liberals ALL want to jump on the bandwagon for Governor. How nice Greene made his money through what seems to be "the bad fortunes of others (land spec)". I'm sticking with a REAL FLORIDA GUY --- Adam Putnam.

Scott made millions running a

Permalink Submitted by Dean Franklin on June 5, 2018 - 8:43am
Scott made millions running a company that stole money from Medicare. Thus stealing from us. Putnam'family farm is in legal difficulties over wage and hour violations. Thus stealing from employees.

He is another Rick scott

Permalink Submitted by Denny on June 4, 2018 - 10:30pm
He is another Rick scott clone. He is also against Medical Marijuana

Is he another Democrat that

Permalink Submitted by Harry on June 4, 2018 - 11:17am
Is he another Democrat that hates America?