JEA Privatization 'In Line' with Lenny Curry's Goals for Jacksonville 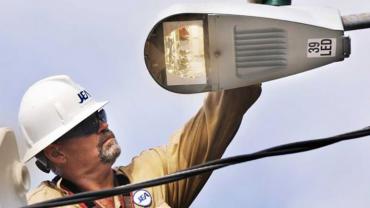 The Jacksonville Electric Authority (JEA) could be making a transition to privatization in a deal insiders say would greatly make utilities more affordable to customers -- and it’s likely the move could find some of its biggest support from Jacksonville mayor Lenny Curry.

The idea of privatizing the JEA was floated by JEA board member Tom Petway, who was appointed to the board by Curry two years ago. Petway is leaving the board at the end of the year, but not before making a recommendation the municipal utility sell its assets to a private buyer.

“The majority of people in Florida... are served in a private-sector marketplace,” Petway told fellow board members at their Nov. 27 meeting. “I believe the JEA board should evaluate where the JEA fits in this emerging private marketplace of utility companies.”

Petway requested the board Chief Executive Officer Paul McElroy take a closer look into the private value of the JEA, which has been estimated to be worth over $3 billion. The move would be one of the biggest sales in the nation, since JEA serves a large number of customers with a higher-than-average track record among consumers.

JEA is the eighth-largest community owned electric company in the country and serves one of the biggest areas in Florida, with 455,000 electric customers. The company also manages hundreds of thousands of water customers in the Duval, Clay, Nassau and St. Johns County areas.

Insiders say there are many compelling pieces of evidence to support the privatization of the JEA, which became an independent authority created by the city and county governments in 1967.

First off, privatization would help reduce debt for the city. By reducing debt taxpayers are responsible for, JEA could help take the risk off the bottom line, with any money going above the debt being funneled to the city for other projects.

In order to privatize the electric company, JEA would need to field buyers, ensuring they would meet rate and efficiency benchmarks to ensure there would be no changes to customers’ electric services.

Florida-based utility companies like Duke Energy, Tampa Electric and Florida Power and Light have all been floated around as potential buyers, but other private utilities, like Southern Company in Georgia, have been suggested as well.

The positive outcomes of a private sale could be especially appealing to someone like Jacksonville Mayor Curry, who allies say would fully support JEA’s privatization -- especially if Petway was the one suggesting the idea. “It’s very real. There will be a serious look at it,” Curry’s political adviser Brian Hughes told Sunshine State News about the idea. “Lenny is a former accountant who was an entrepreneur. He’s a free market Republican. It’s consistent with his ideology.”

Curry himself couldn’t resist talking up Petway, who served as Curry’s transition chair and was one of the top donors to Curry’s 2015 mayoral campaign.

“Tom Petway is a respected business and civic leader,” said Curry about Petway. “He’s spent decades working to make our city better. At JEA he’s made the board stronger and helped the organization grow. I appreciate his service.”

Curry said he “welcomed” the challenge and would work in tandem with City Council leadership to answer Petway’s questions about privatizing the electric company.

How the deal works out and which buyers are being considered will be worked out in the coming weeks, sources close to Curry’s office and the JEA told SSN.

JEA wouldn’t be the first municipal utility to hand over operations to a private utility company. Last month, Florida Power and Light asked state regulators to allow the company to purchase Vero Beach’s utilities for $185 million.

Vero Beach’s utilities serve around 34,000 customers. Vero Beach voters approved the sale of the local utility company to FPL in 2013 and the city closed its local power plant in 2015, but FPL has still not fully gained control of the operations despite offering lower service rates to consumers.

Permalink Submitted by Doug Smith on February 7, 2018 - 8:17pm
Petway and Curry obviously have a vested interest in the transaction. The ethics committee, waste fraud and abuse and attorneys will be involved very soon.

The customers of JEA own the

Permalink Submitted by Frank Widner on February 2, 2018 - 11:40pm
The customers of JEA own the municipality and therefore we should be paid not the mayor and Petway 10 billion / 417,000 customers equals a good payday time to leave Jacksonville

It is a very bad idea. It

Permalink Submitted by Allen Putnam on December 15, 2017 - 8:52am
It is a very bad idea. It will double property taxes in Duval county. Previous studies support this fact and that has not changed.