Our Eyes for Irma: Hurricane Hunters 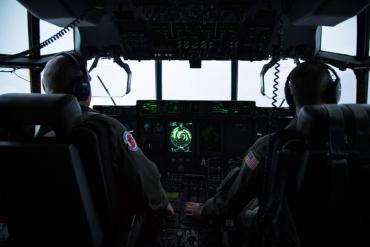 Pilots of the Air Force Reserve’s 53rd Weather Reconnaissance Squadron have been flying into the eye of Hurricane Irma for the past four days.

Maximum winds were recorded at a jaw-dropping 185 miles per hour, said Maj. Brad Roundtree, making it one of the strongest Atlantic storms in history.

Roundtree says, "Our Hurricane Hunters will continue to fly until landfall."

Part of the 403rd Wing, based out of Keesler Air Force Base in Biloxi, Miss., the Weather Reconnaissance Squadron is the only U.S. military unit that flies into tropical storms and hurricanes.

Known as “the Hurricane Hunters,” the squadron has 10 WC-130J aircraft, each outfitted with a crew of five: pilot, co-pilot, navigator, flight meteorologist and weather reconnaissance loadmaster.

Here's how the Hurricane Hunters proceed:

Once a system becomes a tropical storm or hurricane, the Hurricane Hunters begin flying “fix” missions, which are at higher altitudes, ranging from 2,500 to 10,000 feet, depending on the severity of the storm.

Aircrews fly through the eye of a storm four to six times to locate the low-pressure center and circulation of the storm. During each pass through the eye, they release what's known as a "dropsonde" -- something that collects weather data on its descent to the ocean surface, specifically gathering the surface winds and pressure.

The data the Hurricane Hunters collect is sent by satellite communication to the National Hurricane Center to assist with the Center's forecasts and storm warnings.

Why do hurricane pilots do it? “It’s important to be prepared," said Maj. Ryan Rickert, 53rd WRS aerial reconnaissance weather officer. "It’s why we do this, so we can have better forecasts and people have time to prepare and evacuate."

Pilots have been flying into the eye of hurricanes since 1943, when World War II aces wanted to do something good for mankind -- all the time feeling the thrill of risk, but without fear of killing another human being.

1. Do you fly over the top of the hurricane?
NO!! The tops of a big hurricane can be over 50,000 feet high, and our planes could never get up there (they can only go up to 30,000 feet). Besides, the weather we're interested in is down at the bottom of the storm, where it will affect the coastline it hits. For this reason, we fly in as low as possible and still be safe. This altitude can be anywhere from 1,000 feet to 10,000 feet.

2. Is it a dangerous job?
Safety is always our primary concern, whether we're flying in the clear blue sky or through an intense hurricane's eyewall. There is always a risk associated with aviation, but we pride ourselves on the fact that we have flown over 100,000 mishap-free hours.

3. Do you carry parachutes?
No. If we ever had a serious enough situation to consider bailing out over the ocean, we would be better off trying to ditch the aircraft. We do carry life preservers and there are two twenty-man rafts containing survival gear stowed in the aircraft's wings.

4. How much money do you make?
It depends on the individual's rank and years of experience, and whether or not he or she is a full-time Hurricane Hunter (an Air Reserve Technician, or ART) or a regular reservist. ART salaries are anywhere from $30,000 to $70,000 per year, whereas a reservist will make between $8,000 and $15,000 in a typical year.

5. Can I get a ride into a hurricane?
Sorry, but it's not likely. Only qualified crew members, public affairs representatives, and news media are allowed on storm missions. But you can take a Cyber Flight by clicking here. If you are a member of a media organization please visit this link for more information. 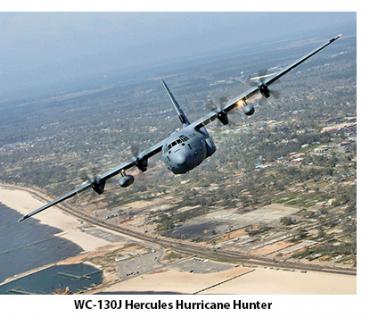 6. How can I become a Hurricane Hunter?
The first step is to talk to our recruiter (228-377-5236) at the 403rd Wing and find out if you qualify for the Air Force Reserve and specifically for an opening in the 53rd Weather Reconnaissance Squadron. We are always on the lookout for qualified, highly motivated individuals. You can find more information here.

7. Are the aircraft's wings specially reinforced?
Believe it or not, they aren't. Remember that airplanes are built to go very fast through the air, and they don't care if the wind is 5 knots (nautical miles per hour) or 150 knots! As we approach the strongest winds in a hurricane, we simply turn gradually into the wind (called "crabbing") until we punch through into the calm eye. Although there are usually some bumps on the way through, they are nothing that the airplane can't handle (although the folks on board can occasionally get sick!).

8. What is it like to fly through a hurricane?
Hurricanes vary considerably in both size and intensity, but in general there are just a few "exciting" moments that usually occur during eyewall penetration. The eyewall is the ring of strongest winds closest to the eye, and we must fly through it to get the information we need. Remember, you can click here to take a Cyber Flight!

9. What is a dropsonde?
It's a small tube with instruments in it that has a parachute attached. It also has a radio transmitter to send data back up to the airplane. At various places in the storm such as in the eyewall and at the center of a hurricane, the weather reconnaissance loadmaster will release the "sonde" into the storm. As it's falling, and right up until it hits the water, it sends temperature, humidity, barometric pressure, wind speed and wind direction back to the aircraft at a rate of twice each second. This is the information the hurricane forecasters use to decide if the storm is getting stronger or weaker.

10. How do you get the sea-level pressure if you're below 10,000 feet?
We can estimate the pressure from the aircraft's instruments as long as we're no higher than 5,000 feet. Above that, we use the pressure instrument on a dropsonde launched out of the airplane to measure the surface pressure.

11. What's the main reason you have for flying into hurricanes, besides getting the pressure?
The exact location of the center is extremely important to the forecasters at the National Hurricane Center. Although they have excellent satellite photos that show the eye (that's how we know where to head to in the first place!), they can't tell where the pressure center is. Another important reason we fly is to give the forecasters accurate wind speeds within a 105 nautical mile radius of the eye. We can send wind speed data every 30 seconds as we make our cuts through the hurricane.

12. Why do the hurricane forecasters want all that wind speed data?
They use it to help tell them where the storm might go and whether it's getting stronger or weaker (along with the pressure). But, the most important use of the wind speed data is when the hurricane is approaching a coastline and is going to make landfall. The forecasters at the National Hurricane Center have the awesome responsibility to decide how much of the coast needs to be evacuated and what types of watches and warnings to issue. Knowing precisely where the damaging winds are can make these difficult decisions a little easier.

13. Do you go into the eye just one time on each mission?
Most of the time we have enough fuel to allow us to make four center fixes on each mission. A center fix is simply when we mark the center and send a special message to the National Hurricane Center.

14. When you do four fixes, do you just fly back and forth through the storm?
Normally we try to go through different parts of the storm to give a more complete picture to the forecasters. We call the normal storm flight pattern an "Alpha" pattern". Here's what it looks like.

15. How long can your WC-130 airplane stay in the air?
We can carry enough fuel to fly for 14 hours, but that's it; we can't be refueled in the air (not that anybody would come out and do it for us anyway!). Our average hurricane missions last about 11 hours.

Rick Scott to Evacuating Floridians: 'Get Out Now'