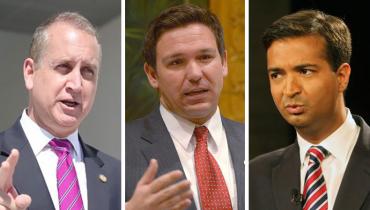 This week, the U.S. House passed a resolution from U.S. Rep. Ron DeSantis, R-Fla., the chairman of the House National Security Subcommittee, expressing concern over the situation in Venezuela and urging the Trump administration to levy additional sanctions on members of the Maduro regime.

The House passed the resolution on a 419-8 vote on Thursday with every member of the Florida delegation supporting it. All eight no votes came from the GOP ranks, including U.S. Reps. Justin Amash of Michigan, Walter Jones of North Carolina and Thomas Massie of Kentucky.

DeSantis weighed in on why the resolution was needed after the vote.

“President Maduro rules using brutality and intimidation and the United States will not turn a blind eye to the plight of the Venezuelan people,” DeSantis said. “Venezuela must hold democratic elections, free of manipulation by the Maduro regime, and open her doors to allow humanitarian assistance to assist those suffering under her socialist government. I applaud the House for voting to condemn the Maduro regime and standing up for democracy and human rights.”

Other members of the delegation also explained why they backed the resolution.

“The Maduro regime continues to sink a once prosperous country into one laden with oppression, food shortages, crime, and inflation,” Diaz-Balart said. “On several occasions, the United States Congress has made a commitment to help the people of Venezuela, and these bills emphasize that commitment by furthering sanctions on corrupt regime officials, providing much needed humanitarian aid, defending human rights, and ‘working with the Organization of American States to ensure international observation that contributes to free and transparent electoral processes.’ For almost two decades, this country has suffered under the Chavista and Maduro regimes, and the United States stands firm in its promise to the Venezuelan people.”

“Nicolas Maduro and the thugs he has put in power have devastated Venezuela’s natural resources and economy,” Curbelo said. “While the regime lines their own pockets with the profits of their tyranny, the Venezuelan people have been left to suffer major shortages of even the most basic goods and necessities. I’m proud of the overwhelming support from my colleagues for the Venezuelan people and I urge the Senate to move forward with Senator Rubio’s version of this bill quickly so we can get it to the president’s desk.”

As Curbelo noted, there is a similar proposal in the U.S. Senate from U.S. Sen. Marco Rubio, R-Fla., and U.S. Sen. Ben Cardin, D-Mary.

Last year, DeSantis co-sponsored a resolution from Ros-Lehtinen and Wasserman Schultz “expressing profound concern about the ongoing political, economic, social and humanitarian crisis in Venezuela, urging the release of political prisoners, and calling for respect of constitutional and democratic processes.”

Ron DeSantis is a doer, not

Permalink Submitted by Lynn Siebert on December 9, 2017 - 1:38pm
Ron DeSantis is a doer, not just a talker. He is a rising star in the "New" Republican Party. Thanks, Ron, for supporting our President's agenda, doing what you can to drain the swamp, and exposing the bias in the Mueller investigation. We must handle the Venezuela issue before really bad actors (Russia, Cuba, China, Isis) get a strong hold in this Western Hemisphere country. We don't need that problem right in our back yard here in Florida.